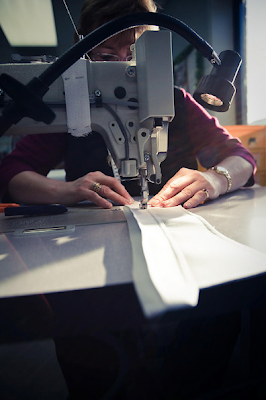 Due to popular demand (well, three people) here are some more facts about how the Turnbull & Asser shirts are made up in Gloucester. I know how much you love those little details.

– As with a suit, the sleevehead of the shirt is slightly bigger than the armhole it has to go into. The excess has to be worked in by hand, pausing the sewing machine every couple of inches to rouche in a little bit. With a Turnbull & Asser shirt that excess is ¾ of an inch. That’s what all ready-to-wear shirts will have and bespoke has as standard. But it can be greater if a customer desires or the shirtmaker instructs – sometimes because the gentleman wears jackets with a higher armhole.

– The firm has patterns recorded for just over 15,000 clients. None are identical.

– To show where the buttons have to be sewn on, the placket is laid out horizontally and each point marked with a pin. They used to use pencil but the mark would occasionally remain. A pinhole can simply be rubbed away. With a bespoke shirt you can pick any number of buttons in any arrangement – nothing is automated. In particular, some men prefer their second button to be a touch lower – a compromise between leaving one and two buttons undone on a normal shirt.

– There are three sizes of button: main placket, collar fastener and button-down collar. The hole for the collar fastener is the same as for the other buttons on the placket; but the button is a touch smaller to make it easier to do up.

– ‘Bong’ refers to the button on the gauntlet.

– When the collar is completed, it is folded in half and then half again. When unfolded, there are three small fold marks that can be compared to the position of the back and shoulder seams on the body of the shirt. Making sure these points match up ensures that the collar is dead centre, so doesn’t twist or stand up more on one side than the other.

– There’s a wall of honour outside the main hall for all employees with more than 15 years’ service. My guide for the sewing, supervisor Kath Cope, has been at Turnbull & Asser for more than 40 years.

– The shell buttons that T&A uses (imported from Italy) are ground down five times to get the surface exactly right. And each hole has to be punched individually, because if all four were punched at once the button would shatter.

I hope that sated your appetite. 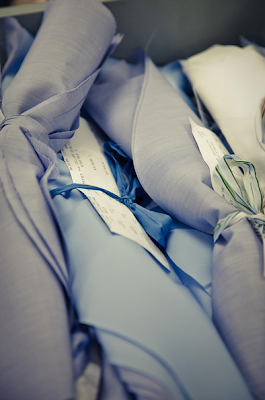 Most interesting. It is a shame T&A (and many others) do not invest such time on their websites

Dear Simon,
I’m afraid I’m obsessive enough (for which read ‘sad’) to have found this thoroughly absorbing: please help me to get out more!

Please could you write a post on pin ties and clips please.

Very interesting series of posts on bespoke shirts. Interestingly it seems that you were initially slightly disappointing with your fitting and got more comfortable over time. It would be great to get a feel for what the competitive dynamics are on Jermyn Street, Any chance you will visit more, less well known, shirtmakers soon?

probably not I’m afraid. I’m now happy with T&A and loathe to change

I have just bought one thanks to your review! I have a question thought: are the extra buttons normally sewn to the shirt? My shirt does not have any spare one…

No there aren’t normally any spare ones. T&A will replace one for you if any come off. They don’t expect you to do that yourself

thanks a lot for your response.Unfortunately, as I do not live in the UK, it is gonna be difficult if I loose one… Whatever, keep on with your fantastic blog!A frog 😉

Hi Simon,
Just found your blog and enjoying a level-headed and subtle approach to men’s style, thank you.
I have two questions, grateful for either a blogpost reply or via comment.
1) You and the gents in your photos look very slim and dashing. Do you have any genuine advice in dressing for those of us who are heavier, or even overweight? I am fairly muscular but also softer than I’d like to be – thighs, buttocks and shoulders tend to be the tight points in clothing.

2) Button-down collars – I have a few of these and never know what to do with the collar if I’m wearing without a tie (which is almost always, for either work or leisure). My instinct is to keep the buttons done, but then I sometimes feel this looks a little weird or austere. However, if I try them unbuttoned it seems to look messy!

Hey Rob
I should do a bigger piece on the first point – I will.
On button downs, I would normally keep them buttoned down. It helps it curl nicely around the jacket collar usually

Any thoughts on that “bong” (gauntlet button)? I noticed some shirts have them while others don’t. Do you use them/request them?

I usually don’t have them, as I don’t use them functionally (ie sometimes wanting them done up, sometimes not) and they are a pain to do up every time otherwise