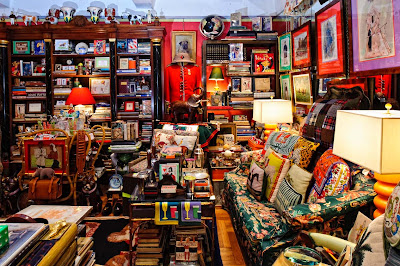 New Yorkers have mastered the art of living luxuriously in small spaces. Visiting Leonard Logsdail and Stephen Kempson in midtown last week was a good example: you step straight from the elevator into a compact yet very well-appointed tailoring studio, complete with armchairs, drink and racks of cloth. Alan Flusser’s small boutique is similar.
But the “bachelor flat/cum showrooms” of Thomas Cary (as he himself described it to me by email) are something else. As the pictures here amply demonstrate, the four small rooms on the upper-east side are stuffed from floor to ceiling with gentlemen’s collectibles and accoutrements.

From an old Dunhill walking stick with concealed blade to an Asprey catalogue featuring beautiful painted boards; from Christmas cards drawn by Cecil Beaton to vintage velvet slippers. And of course books, mountains and mountains of books. Regular customers include Ralph Lauren and Tommy Hilfiger, who have bought items both for display and design inspiration. 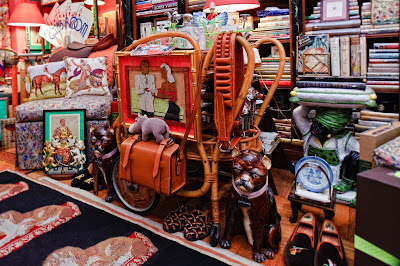 I had discovered Thomas while searching for a copy of Men in Style: The Golden Age of Fashion from Esquire by Woody Hochswender. Although only published in 1993 it is now out of print, and is the only collected edition of illustrations from Esquire or Apparel Arts as far as I know. Outside of this volume there are the original editions of both magazines, but they usually only contain a few plates and are much more expensive.

As I was to be in New York, and one seller on AbeBooks.com (Thomas) lived in the city, I thought it would be a good opportunity to check out the book. Little did I know the treasure trove I was discovering. 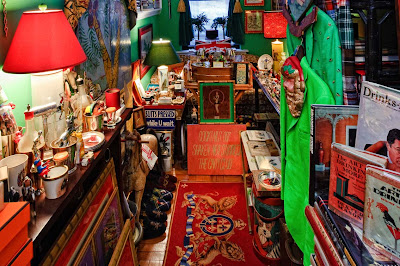 Thomas also owns several hardback editions of the original Apparel Arts, which are truly beautiful things. The adverts are just as attractive as the features – as those that have seen scanned copies on various style fora can attest. But I didn’t realise that they also include swatches of cloth tacked to the pages. Not big ones, but enough to give a prospective buyer a sense of the weight and handle. If only my pockets were deeper (the set of six is on for $4500).

I did end up with Men in Style though, which I was very happy with. Fans of classic style will be familiar with many of the illustrations, but it is lovely to have them collected and in one’s hands. And doubtless they will provide inspiration for many blog posts in the future. 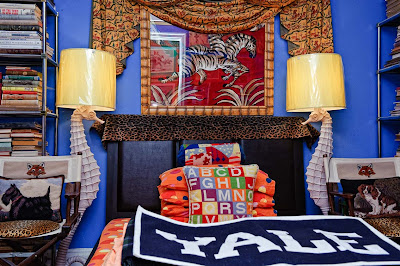 [Pictures from Tina Barney’s portraits of the showrooms for Nest Magazine in Spring 2000.]

What’s the address/how do I get there/does he have a web site?

Ahem… Most interesting. Is it open to everyone or by appointment only?

Hi – yes I’m sure Thomas would be willing to show anybody around who has an interest in such things. His email address is Carycollection at aol.com and his book collection is gradually being listed online – the top two hundred items can be seen on Abe Books at
http://www.abebooks.com/servlet/SearchResults?sortby=0&vci=714383

I’m glad someone else has seen Men in Style. I happened upon it in my university library while looking for something entirely different. Every time I get a notice that it’s due, I just can’t help but renew it.

I debated posting about it last week and decided I would put it off until next week, but looks like I got beat to the punch, haha.

Walking into this apt is like being Howard Carter walking into King Tut’s (or Tom’s) tomb- fabulous!

Thomas was very kind and courteous with me (before he knew I was anything more than a customer). And his price on the book was among the cheapest I could find.