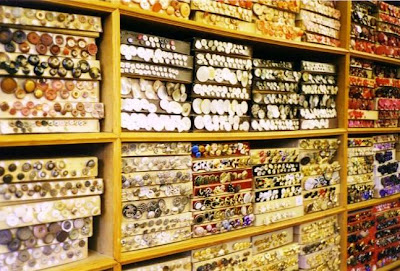 Since I posted a few weeks ago that I had sourced some rather nice mussell-shell buttons from Duttons in York, I’ve had quite a few enquiries about them. A couple of readers asked about international shipping and one or two tailors have asked about including them in upcoming collections. All rather surprising really.

Well, I went in to see the lovely people at Duttons earlier this week and they weren’t very surprised. They have the largest selection of buttons in Great Britain apparently (despite the shoebox-sized shop) and source them from around the world, including vintage and modern glass, mother of pearl and Italian enamel. Their buttons have appeared in costumes used for films such as Pirates of the Caribbean, Evita and Captain Corelli’s Mandolin. They also stock haberdashery, ribbons, lace, needlework kits and soft furnishing trimmings.

What impressed me about their selection was the availability of sets in the two sizes required for suit jackets – for the front and the cuffs. Apparently this number has been dwindling recently, because most people buy for ladieswear and not for men’s, so buying in just one of the two sizes and leaving the other one behind. However, a current rationalisation should increase the number of such sets.

Duttons does ship internationally. There is no selection to view online, but they are very willing to dicuss over the phone what colours and sizes of buttons are required, and then send samples of possible matches to any address.

Even better, if you request an order form then you can trace the size of the button required, attach swatches of material that the buttons will go with, and add any other comments that you think will help the staff with their selection. The charge for the sameples is £2.99 to cover postage, packing and insurance.

Requests should be sent to Michelle Horton at: Duttons for Buttons, Oxford Street, Harrogate, North Yorkshire, HG1 1QE. Contact telephone number: +44 (0)1423 502092. Email is [email protected] Other than the store I know in York (32 Coppergate) there is also this branch in Harrogate and one in Ilkley (3 Church Street).

Thank you very much for the suggestions I had from readers for button shops in London – The Button Queen, MacCulloch & Wallis, John Lewis and Liberty’s. Although some of them had some great buttons, and I ended up getting some wooden ones for a grey flannel suit from MacCulloch & Wallis, none of them had close to the selection of Duttons and particularly lacked the pairs required for suits.

That’s so cool, thanks for posting a link!