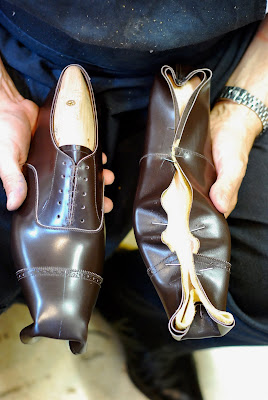 The next stage in our painstaking exploration of shoemaking at GJ Cleverley is the checking and lasting. Having cut the leather to size and had it closed, the completed uppers have to be stretched onto the last.

This stage is intended to check that the 2D uppers fit the 3D last, and to let those uppers sit on the last for 10 days or so, so they mould to its shape. That way, once the uppers are given to the maker – who will actually last them properly, to an insole – they are pre-formed and the maker’s job is easier and more mechanical. 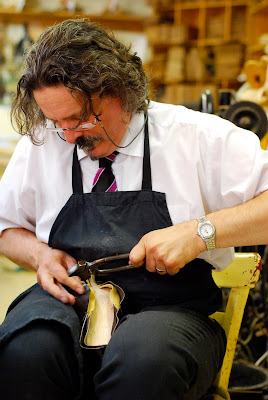 Dominic Casey kindly performed this process on my uppers, talking me through it along the way. The reason this stage is always done in-house is that Dominic can ensure the upper fits properly given his knowledge of the customer, whom he will probably have measured and will conduct the fitting with as well.

To that extent, my experience with Cleverley’s is a bit of a hybrid as I have had George, Teemu and Dominic involved in my shoes. Usually George and Teemu work together, the first measuring/fitting and the second creating the last/checking (They’ve been doing it together so long they are “almost symbiotic”), while Dominic tends to do all those processes himself.

Whoever’s involved, the closing and the making are the processes that are outsourced because they are the most mechanical and less dependent on knowledge of the customer. 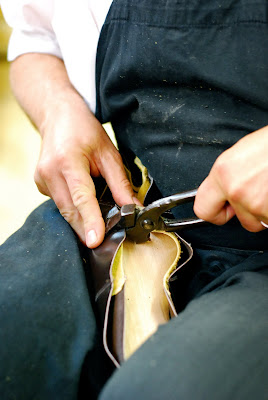 So, here we see Dominic stretching the upper over the toe of the last first. He makes sure the white line that marks the centre of the toe is on the tip of the last. That is secured by one nail, using the same pliers to knock it in as are used to stretch the leather over.

Then two nails are put in either side of the toe cap. Here Dominic makes sure the toe cap is kept at a right angle to the line of the shoe and that the leather is tight enough across the last. “The leather stretches so far and no further with any ease, you get a feel for it,” he says. But it is also easy to tell whether the leather is tight enough once the nails are in. Dominic lasted one loosely to show me the difference, and you could pinch the slack above the toe cap. When it is lasted properly, that’s not possible; it is drum tight.

Two more nails then go in, around where the joints of the foot are, finishing the front. 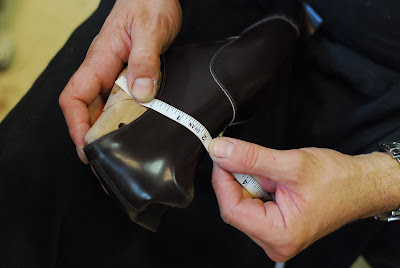 The heel of this first upper is then nailed to the last, making sure the height of the heel corresponds to a standard size for my height and foot shape – usually about 2 3/8 inches. Then two last nails, fastening the outside quarters. The leather of the sides should again be very tight, snapping back when stretched. The height is also checked – 2 inches.

Unfortunately, that’s the easy bit. “Life would be much easier if we made shoes for people with one leg,” says Dominic. Because the true art lies in making both shoes look the same, despite being different sizes.

My left foot is almost half a size bigger than my right. This excess will be made up on the facings and in the back half of shoe – as it will be less noticeable there. The vamp and toe-caps should be exactly the same length. So having lasted both shoes, Dominic compares them and finds the left cap to be 1/8 of an inch longer (as you can just see in the picture below). So he does it again. It’s still ever-so-slightly longer, so he does it one more time. 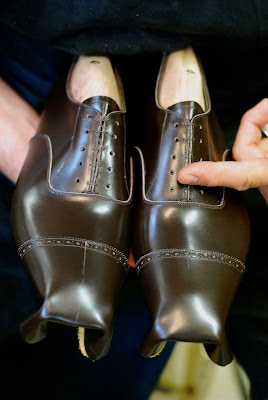 The two are then compared, to make sure they look like a pair.

To show me how the leather will take on the shape of the last, Dominic removes the first upper (the right), which has been sitting on its last for around 10 minutes. Already, the toe shape and heel are clear. It’s obvious where the maker should last it to the insole.

The maker will add a heel stiffener and toe puff to the shoe, giving it greater structure, and then last it. Then the welt will be sewn on, back at Cleverley, ready for a fitting. There will be at least a week between each stage, though, to allow the leather time to dry and settle. Having to let the leather rest like this is one thing that makes the whole process so much longer.

Dominic says he likes this lasting and checking stage, because it is when the shoe really begins to take shape. “Before that, the last-making and the pattern-cutting, it’s all rather an intellectual exercise,” he says.

Dominic has rather a way with words. But then he did used to be a management consultant. 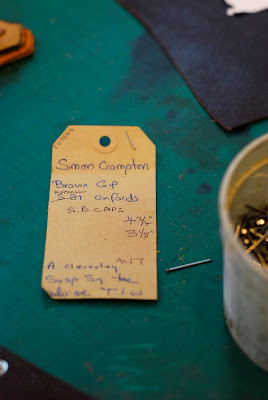 You can follow the discussion on Bespoke shoes at Cleverley: Part 6 by entering your email address in the box below. You will then receive an email every time a new comment is added. These will also contain a link to a page where you can stop the alerts, and remove all of your related data from the site.