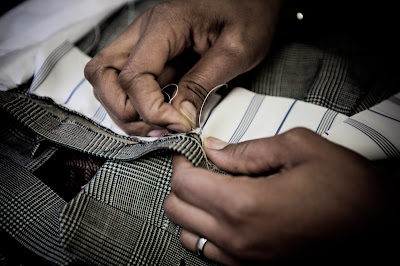 An awful lot of handwork goes into a pair of trousers at Henry Poole. Here we see a few examples of that work, with a particular focus on attaching the curtain – the strip of cloth that runs around the inside of the waistband.

Before we get to the trousers as we see them here, finisher Sian has already tacked up the bottoms of both legs with cross-stitches and sewn tape around the insides to help them to hang straight. She has also put in tacks at the top and bottom of the pockets to reinforce them, put prick stitches up the front of the fly, sewn on the side straps and stitched up the back seam. The last hand operation is to sew down either side of the inlay in the seat. 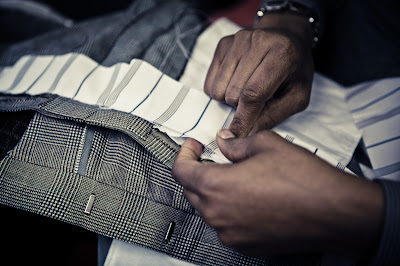 Then onto the curtain. The material is the same as the sleeve lining, in Poole’s house stripe. Two strips will be sewn all the way around the inside of the waistband: the first is a doubled-over strip that is attached half way down the waistband and will hang loosely below it on the inside of the trousers; the second is sewn onto the same line but folded up and stitched to the top of the band, covering the waistband itself and the seam attaching the lower strip.

Most of the way round, Sian sews three small stitches (about half a centimetre in length) and then back stitches on the third, to secure it. This is reduced to two stitches forward and one back on places that need extra strength, like the pleat in the curtain that is put in behind the darts on either side. When folding the material over to make the pleat, Sian is careful to match the Poole stripes (above). The lower strip of curtain is then attached to the pocket lining to keep the lining in place during wear. 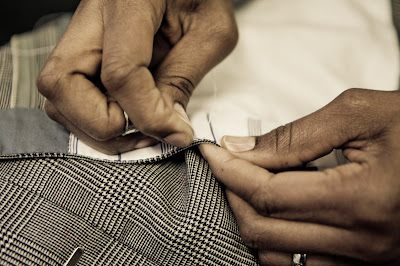 Most impressive of the various hand operations is the final stitch along the top of the waistband, which requires an exact, one millimetre gap to be left so that no lining ever shows above the waistband from the outside. To achieve this Sian is constantly rolling the material between her fingers to get the tension, and thus the height, exactly right (shown above).

Below you can also see Edward Cooke, the trouser maker under whom Sian works, preparing the fly on a pair of summer trousers. He bastes down either side before sewing it down by machine. 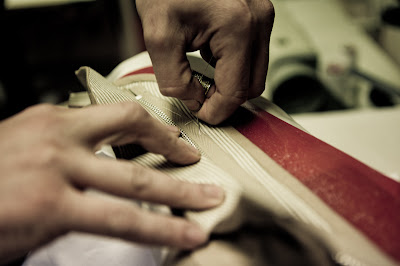 You can follow the discussion on Prince of Wales at Henry Poole: Part 6 by entering your email address in the box below. You will then receive an email every time a new comment is added. These will also contain a link to a page where you can stop the alerts, and remove all of your related data from the site.