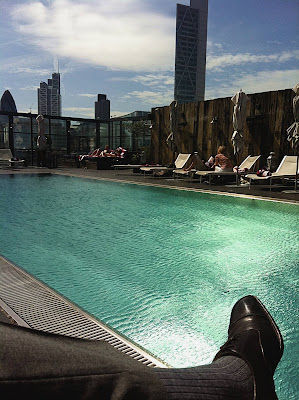 Nice, isn’t it? That’s the view from the pool on the roof of Shoreditch House, where Michael Drake and I had lunch earlier today. The club and its sister outfit, Soho House, were of course in the news a couple of weeks ago for banning ties. The idea was to bar yuppy City types, but it was rather a silly way to go about it. Nothing wrong with a good tie, as many op-ed pieces pointed out, with some also highlighting the counterpoint of both Drake’s and E Marinella launching in recent weeks.

I, of course, wore a tie. Knitted, but nonetheless a proper handmade necktie. Behind the receptionist was a big piece of artwork proclaiming “no suits!” I wasn’t in a suit (Rubinacci jacket, grey fresco trousers and green cardigan) and neither was Michael (striped Oxford button-down, brown linen safari jacket, sky-blue socks). But up on the roof several businessmen sat around in suit trousers and shirts, chatting happily away. They would have looked better in a tie.

Michael hasn’t been running Drake’s for the past year, but only officially left the business last week. Since then he’s apparently spent most of his time writing nice letters to the entirety of his Rolodex. Which sounds very tiring.

“Just because I have sold the company doesn’t mean I have retired,” though, says Michael. So what’s next? Probably not a whole new launch (too much work) but perhaps a niche project online and there’s always the possibility of a book if long-time collaborator Bruce Boyer gets his way. Some of the possibilities online sound mouth-watering. It’s great to know that Michael’s inimitable taste will find new ways to express itself.

Among other views expressed were the pleasure in seeing craft being more valued by men the world over – something we’ve both benefited from – and the complementary nature of both deep red and burnt orange accessories with brown shoes.

Good luck to Michael, his many Apple computers and suede shoes.

You can follow the discussion on Fare well Michael Drake by entering your email address in the box below. You will then receive an email every time a new comment is added. These will also contain a link to a page where you can stop the alerts, and remove all of your related data from the site.

I haven't tried the Cary, so I can't say. Sorry

If anyone wants more discussion on the T-shirt under shirt thing, have a look, read and even comment on the original post on that, here

I think they'll still be around for a long time. But perhaps something to get when you have most other bases covered