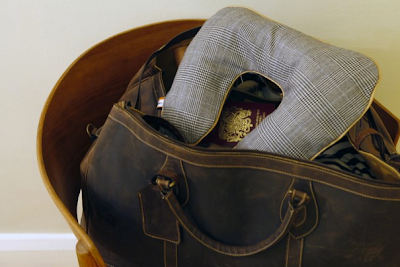 I like the eye masks and neck pillows from British designer Otis Batterbee.

I’m not going to pretend they’re the greatest piece of craft ever to grace this site, but they are all made with care, in England, and they function well. They are nice and quirky, and there is little else out there competing for a fairly narrow market.

The eye mask I have is in a Prince of Wales suiting and filled with lavender. It is comfortable, unusual and the lavender aroma is effective without being overpowering. The only criticism I would have is that the ribbon attaching it would be more helpful elasticated. It’s annoying to tie it each time so I try to keep it at the right length and squeeze it on.

The neck rest I have is in the same pattern, though using them together might be too much. The rest gets more use though, on any long journey, where the eye mask is only used on long-haul flights.

The fabrics, suitings and velvet, are milled in the UK, with the masks being made in Cheshire. To make them, each mask is cut individually by a pattern cutter before a machinist sews on the piping around the edge and adds the velvet ribbons. They then sew the backing on and turn the mask inside out to insert a quantity of lavender with a small funnel, before hand stiching the hole closed. Finally, it is steamed by a presser. An embroiderer is also employed to add the OB initials. 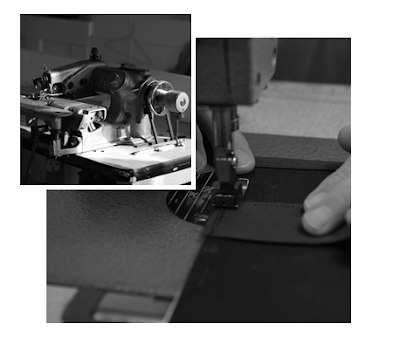 Neck rests don’t work on me – I think perhaps my neck is too long. My head still ends up lolling far enough that I awaken with a neck-ache.

Perhaps you could snip the ribbon to two lengths reaching the back of each ear and sew in a piece of elastic about 2cm shorter than the gap, which will automatically adjust to your requirements.

"There can be direction, but no complete answer." I think this sentence sums it up perfectly.

Yes it would still work, but it would be more tonal and I'd want something else potentially. Perhaps a white handkerchief in the pocket

I disagree. Perhaps some time I'll write a whole post explaining why

Amazing, I hadn't seen that Christopher, thanks. It must be tasteful if Andreas wears it