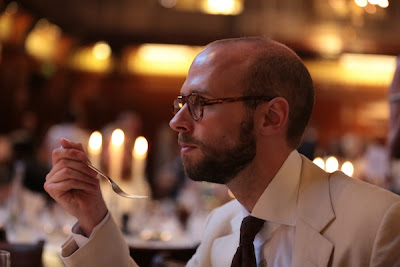 Trying to look natural while eating. Which is impossible
The linen suit shown here is my most recent commission, from the sterling outfit that is now Kent Haste & Lachter. There is a blog; there is a group photo on the wall; there is a real spirit of enterprise. I have to say I’m very pleased for them (if that’s not too condescending).
Interestingly the linen suit (13oz from W Bill) was made to the pattern that John Kent created for me, but was entirely fitted by Terry Haste. This is purely coincidence, and was a result of John not being around when I went in for fittings, but has led to a slightly different result to my first suit (which John fitted).
John, for example, tends to fit a very close back. It looks beautiful, but allows less room for movement – particularly for me, as I like to wear my jacket while at my desk, arms outstretched at the computer. John also likes a slightly slimmer trouser, which is not tight but again allows that little bit less movement. 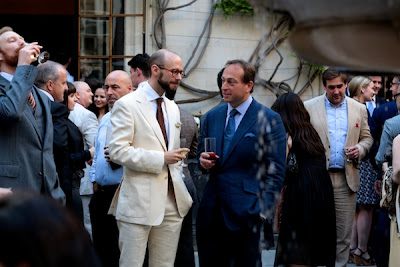 With Simon Cundey of Henry Poole
The suit is half lined in the traditional English manner, that is a buggy lining with the foreparts lined and the back half lined in the same material. So not as much air flow as the Caliendo jacket last week, which is more like a quarter lining.
But the linen is wonderfully cooling. My only other linen is a brown 9oz from Scabal which, while still nice, wrinkles very quickly and loses its shape too. It looks pleasantly rumpled, but its light weight means there is less linen to feel coolly against the skin. This heavier W Bill has been a revelation in that regard.
Beautiful make, as you’d expect from KH&L (as the hangers now proclaim), and a three-patch pocket configuration that will make it easy to wear with lightweight grey trousers. I expect to do that as much as wear the suit in its entirety.
The photos are from the MTBA dinner again, and no, I don’t have any shots when I am not leaning comically forward so that the collar is standing away from my neck.
Shirt, as with the Caliendo shots, by Kiton and tie from Church’s. Glasses by EB Meyrowitz. 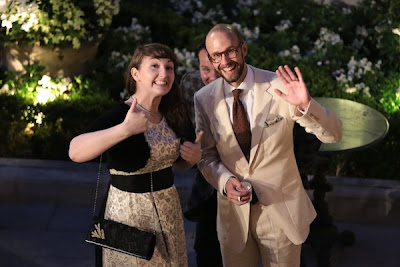 With Claire from Hawthorne & Heaney (embroidery) and Russell from Graham Browne

You can follow the discussion on Kent Haste & Lachter linen suit by entering your email address in the box below. You will then receive an email every time a new comment is added. These will also contain a link to a page where you can stop the alerts, and remove all of your related data from the site.

You could certainly work on with someone like the Armoury, yes.

No, generally the same as the body of the jacket

Hello Simon, I found this exact coat second-hand. Please can I ask you (if you remember) what size you were wearing in the Donegal? Many thanks for replying. Detlef