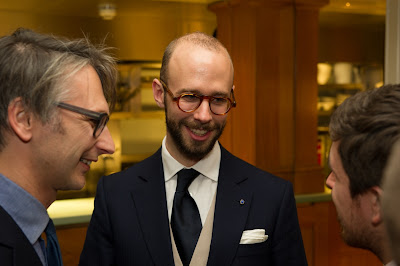 I recently wrote about my favourite evening combination – blue shirt and grey/silver tie with a navy or charcoal suit. This is a rather more dressy combination for formal events and dinners, making use of a waistcoat more usually worn with a morning coat to add a smart edge to the outfit. 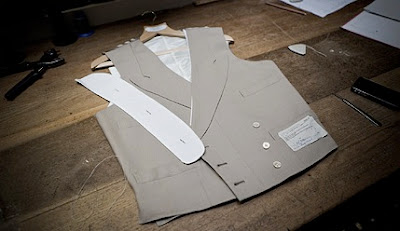 The double-breasted waistcoat, made by Anderson & Sheppard, is in a fawn 12-ounce hopsack with mother-of-pearl buttons. It has peak lapels that are delicately scooped out and tacked down – the shape that A&S has always used for morning-dress waistcoats. It is closed with three jigger buttons, one under the overlap of the lapels and two on the underside of the display buttons. It also comes with white Marcella Demis – strips that run under the edge of the lapel and fasten with a further three buttons. They’re too formal for wear with a navy suit like this, though.
The suit itself is from Graham Browne, in a Lesser navy herringbone. The white Kiton shirt is worn with a navy satin tie from Drake’s at ASuitable Wardrobe. The lapel pin is actually a waistcoat stud from Kirby at The Hanger Project; I shamelessly copied that idea from Permanent Style reader Theo.
The event was JM Weston’s inaugural Creation Dinner in London. Alongside me are Tim Bent of Bentley’s Antiques and Justin Fitzpatrick of The Shoe Snob. It could be a better picture of me, but there you go.
Second photo: Anderson & Sheppard/Andy Barnham

That is a very elegant ensemble, Simon.
It does lead me to ask about odd waistcoats in general; when should they be worn, and when are they appropriate? Which materials and colours work best? Can cardigans or sleeveless pullovers ever be used to serve the same function? I’m sure your readers would be interested.
David

Odd waistcoats rarely do in my opinion – in this case it was always intended as an odd waistcoat, in that case with morning dress. Cardigans or sleeveless sweaters are much better, very versatile and replicate the flattering effects of a waistcoat under a jacket

Hi, do you have any more pics of this GB single breasted suit.
Having one done now by them, I’m just a bit worried that they will get the styling and balance right. A lot of the suits I saw hanging up there seem v old fashioned in styling so just want to see as many examples of their work that I can.

Not to hand, no. There are dozens on this blog though, if you have a search.

You’re pretty right about GB but they are always very open to suggestions. Always good to bring in pictures or other jackets if you want to describe a particular style

Can only see pics of your DB GB’s.
If you have time to post a full length pic of your SB suit (want to see the suit as your jackets are shorter than what I would take for a suit) it would be appreciated.

Look at the ‘fishy and polo’ post and also th choppin and lodge suit. Same cutter