I saw my first British bespoke suit being drawn and cut recently at Graham Browne, in advance of the first fitting.

First I saw the patterns being drawn. Picture 1 shows the pattern for the front part of the trousers, which has just been drawn out. The three length points are marked first – the bottom of the trouser, the knee, and the top of the inside leg. The width of each point is then marked off and joined together by ruler. 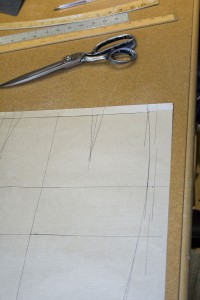 The three lines you can see in this photo are the inside leg, the hip and the waist, the lines between which are curved. The triangle in the centre of the picture is a front dart. Given my waist, two darts were needed (more or less can be used depending on one’s measurements) and the house style at Graham Browne is to have one in the front, here, and another in the back. Some tailors put two in the back but the guys here feel one dart in the front of the trouser adds a little needed room across the pocket – especially if it is a slant pocket. If there was no dart in the front, the curve to the waist (top right) would have to be more acute.

The back of the trousers is also 1¾ inches higher than the front. This varies quite a bit from tailor to tailor. The guys at Graham Browne say they have worked a lot on their trouser system in recent years, but wouldn’t give away any more than this.

The second picture shows the patterns being cut out – that’s the front and back of the jacket, right and left. The greatest skill is in drawing up and cutting these patterns correctly, rather than tracing them onto the cloth with chalk – even though this often gets greater attention.

In the next picture Russell is tracing the pattern of the sleeve onto the paper below, using a spiked wheel. Russell is fastidious about his sleeves – indeed just one mention of them launches an explanation of how rounded the shoulder must work here, and the fact that some other tailors fall down by leaving the sleeves up to the tailor, rather than the cutter.

And picture four, below, shows how that rounded shape is taken on – the larger piece is the outside of the sleeve and the front piece is the inside. The two shapes need to flow smoothly together, rather than chop squarishly from one shape to another.

Next the patterns are traced with chalk onto the cloth. I love the fact that the best way to rub out a mistake is just to hit the cloth with an open hand – the chalk dust flies off. If it were rubbed it would just work further into the material.

The penultimate photo shows the full suit chalked up on the cloth. Notice that there is only one half of each section here – one side of the front of the jacket, one side of the back and one sleeve. The cloth is doubled up and both parts cut together. 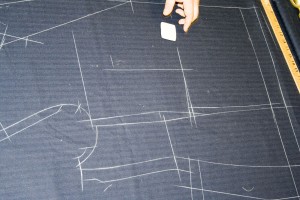 Finally, the two halves of the cloth are sewn together with a mark stitch to indicate where the outside edge of the jacket will be – the remainder of the cloth being the inlay inside the chest or sleeve. This is a loose stitch that is immediately ripped apart, but leaves knots of thread to indicate that outside edge. It seems like a tiresome process just to mark an edge, but such is the tradition of bespoke. 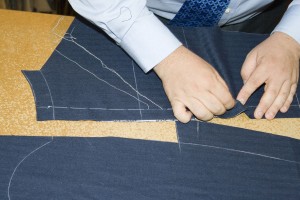 First fitting later in the week.

That fabric is great! The suit is going to be fantastic!

An interesting and enlightening post. Please continue the series!

I’m having a bespoke suit made, and going for the basted fitting soon. I contacted my tailor and asked to see the paper pattern, but was told that this would only be created after the basted fitting. This seems to contradict everything I’ve read. Should I be worried or is there a reason for this?

The British way isn’t the only way. Making a pattern after the first fitting should render the same. After all, it is the fitted pattern that matters, so what good is the first? Some tailors never make patterns, they just draw on the cloth and spend time with the fittings. What matters to the customer is the fit, not how it got there.

True. This is a fairly old post – there are more recent posts about tailors making straight onto the cloth (e.g. Langa) and others making patterns at different stages….

Sounds like a miscommunication somewhere. Either he’s not a bespoke tailor or he doesn’t understand your question