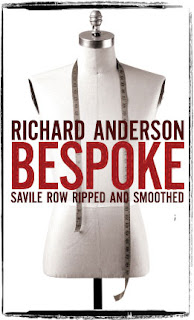 Richard Anderson can write. This quickly becomes apparent as the reader embarks on the story of his time on Savile Row – from dishevelled apprentice to Huntsman’s youngest-ever head cutter. The realisation that a book is to be chronological, and start at the very beginning, is normally accompanied by a long intake of breath. Fortunately, even the description of Anderson’s father taking his 17-year old to the job interview is entertaining.

It helps that the story of Huntsman’s takeover reads like a genuine thriller, with high stakes, espionage and betrayal. And throughout the 20-odd years described, characters such as Colin Hammick, Brian Hall and Dick Lakey necessarily breed amusing anecdotes. Such as the time Lakey tried to rescue 10 pairs of white trousers by washing them at home, only for the zips to stain the crotch; then adding lemon, only for it to add its own mark; and then successfully washing them clean, only for foxes to tear them off the washing line and eat them.

But Anderson’s writing has its own rhythm and pathos. A liking for short, one-sentence paragraphs and chapter-ending cliff hangers means the story tumbles along.

The latter sections on Richard Anderson Ltd, after the fall of Huntsman, are nowhere near as self-serving as I had been led to believe. The style switches from chronology to analysis, enabling short sections on women in the industry, a day in the life and ready-to-wear clothing in Japan. The second of these three chapters is particularly interesting for an insight into the running of a bespoke firm, and the challenges in figuration, for example, that come up every day. Such as the wadding, canvas, styrofoam and even plasticine used to try and deal with James Fox’s tricky shoulders.

And while some will bemoan the fact that suits under Savile Row names are made in Japanese factories for local clients, the description of how this functions is fascinating.

For tailoring enthusiasts there are several insightful sections on the practice of cutting. The description of how Anderson learned to cut trousers for the first time, for example, and then later how to take measurements ahead of his first trip to the US. Indeed, for those not enthused by technical detail the passages where Hall describes the chalking of back and foreparts could even be too much.

There is, finally, a surprisingly in-depth glossary. I can now identify a bar tack, describe the nap on various cloths and relate the origins of Silesia (named after a region of Poland because of the inventor’s wife’s sympathies for a country being partitioned between Germany, Austria and Russia. The descriptions only suffer from the inevitable difficulty in describing the look and feel of different cloths without imagery.

“For tailoring enthusiasts there are several insightful sections on the practice of cutting. The description of how Anderson learned to cut trousers for the first time, for example, and then later how to take measurements ahead of his first trip to the US.”

This may be weird, but that paragraph caught my attention the most. Seems interesting to get such a magnified view of fine tailoring. Thanks for the review.

Nice review! And glad you enjoyed the book, too. I recently read it and left my review