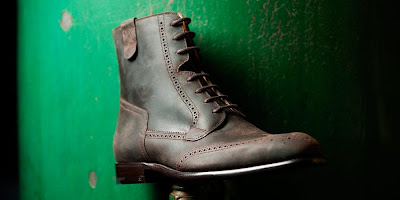 Ed, London: I just bought a pair of boots and was considering putting rubber soles on top of the leather ones, to make them harder wearing and more suited to the rain and the snow. Is this a good idea?

Pearse, London: With the weather being the way it is, is it ever appropriate to buy a rubber soled shoe? Or is there anything which can be done to negate the damage that rain and puddles causes to leather soled shoes?

Anonymous: Is the application of a half sole encouraged or discouraged for an Edward Green or any other quality shoe? I personally have been a blind advocate of them as they allow me to be much more flexible with regard to the weather and protect the original sole/shoe from refurbishment.

Not surprising, this flurry of questions. Last week it snowed in November in the UK for the first time in decades. It caught men’s shoes off guard, it seems, as much as it did Network Rail.

Rubber soles may seem like an obvious choice when the weather is icy, but the grip on a flat rubber sole is not necessarily that superior to leather (rubber soles with a tread are another matter). When damp and worn, leather provides decent friction in most situations.

The bigger advantage of rubber is that it is waterproof where leather is not. I have a pair of Swims galoshes that I wear with light dress shoes (such as the Cleverleys) on damp days like today for just that reason.

But the real problem with leather soles is that men aren’t looking after them properly. In a follow-up email to one of these questions, the reader mentioned that he is wearing his leather-soled shoes everyday, not drying them on their sides and not using shoe trees. It’s no wonder the soles are getting shredded – they’ve probably never fully dried out.

Leather soles can be very hardy if treated right. If it’s too difficult to take care of them, go for rubber and sacrifice something in elegance.

Some leather shoes are also more robust than others. You can have double soles (keeps the sensitive upper further away from the wet), storm welts (stops moisture seeping in at the sides) and waxed or cordovan uppers (I’ve been wearing the Lodger Ibano (pictured) through the snow on more casual days and they have done wonderfully – no dampness, no damage.) Silicon waterproofing sprays also give some protection against light showers. So if style is a concern, stick with leather but treat it right.

If you still want rubber soles, they can be easily and inexpensively added to welted shoes. Get someone to take off the old sole and put a rubber one on though – the leather underneath won’t rot if it’s covered, as one reader feared, but it isn’t designed to be covered either.

Finally, it’s always worth going for a full rather than half-sole if you can afford it. The cost is only a little more and it will both look better and prevent water getting in at the join. Certainly if you have Edward Greens. Get them sent back to the factory and they’ll be resoled, generally refurbished and come back looking better than new.

Thanks for the Lodger tip, Simon. Nice looking boots.

Your shoe journalism is always just what is needed.

I’ve had a good experience with the Dainite rubber soles on my Crockett and Jones Oxfords. A very slender sole that is also 100% waterproof.

Living on the west coast of Norway, I frequently face difficult weather for leather soles: rain, snow etc. Nevertheless, I always use shoes or boots with leather soles and galoshes at work. This gives me three advantages:
1. Protection of the leather soles while commuting from/to work
2. The comfort of leather soles in the office (rubber=more friction)
3. I do not pull dirt, water etc. around in the office, since I take off the galoshes.

Besides, I never use the same pair of shoes two days in a row…

Thanks for an notable post. Rubber soles can also be thought of as a different style from leather ones, apart from their waterproofing qualities. Chunky full sized brogues with a tread sole look great, though perhaps not with a suit.

I think that the sacrifice in style of wearing galoshes (with a pair of really nice shoes) is far greater than having rubber soles installed (-: OA

I’d say something with a Dainite or Victory sole such as an C&J Coniston or (my incoming current bargain boot) the Loake Bedale is perfectly appropriate if somewhat clunky for the weather. If you need something more sleek, perhaps a dark brown chukka or a black Chelsea boot would be quite appropriate, imo.

First let me thank you for a splendid blog. It is a constant inspiration to me.

I live in Stockholm, Sweden, and we are used to harsh, cold weather although this November has been particularly unforgiving even by Swedish standards. Rubber-soled shoes are essential in our climate because we have snow about 3-4 months each year. Even the pavements in larger urban areas are covered with snow, which soon turn to rock solid ice after constant thawing/freezing cycles. But there is a difference between rubber soles and rubber soles. Dainite soles has decent grip on snow, but on ice it is less helpful. The rubber in the Dainite soles get stiff and loses traction if it’s really cold. The way to go in my opinion is either a Commando sole or Ridgeway sole; both has much better traction than Dainite due to their more rugged construction. Also, the Crepe sole is really useful on snow and ice. The rubber on the Crepe sole is softer than above mentioned soles and thus provides you with better grip, especially on ice.

I’m searching a good cobbler in London not far from W2. I always put a half rubber sole on the top of the outsole to preserve it. I walk a lot, and leather soles just can’t make it. It gives more grip to the ground as well as make the heels more comfortable as rubber provide kind of cushion to ladies heels. I got a good cobbler in Paris, but as I’m a Londoner for now, I am looking a good one here near W2 as possible. Any tip?
I love your blog by the way. Your tips are invaluable. My shoes are thankful!
Thanks
Gaelle

You mention that you use Swims, can you possibly suggest a good place to buy a pair in London?

They sell them in Cleverley’s

To me, overshoes is the best choice for unexpected wet weather. When the rain is pouring (or snowing), one’s style isn’t ruined by a pair of fine black overshoes. Going to work in a rubber shoes/boots and having a pair of leather sole shoes at work for indoor use is a clunky solution.

Paul, Miami. I have a Topy rubber half sole put on leather soles to protect them. Costs aboust thiry US dollars and is very effective. For US readers Pasquale’s in LA does a nice job

Simon,
Looking for boots to replace a pair of worn out chukkas I wore last winter. Is a Dainite sole a better option for regular wear in foul weather over leather? I love a leather sole and have never had rubber but this time round I’m thinking about it. C&J Northcote is top of my list, I am sorely tempted by the Harlech shell cordovan,such a beautiful colour, but dare I buy that boot to wear regularly in winter with a leather sole? Skye is the brogue alternative I suppose.

Dainite definitely worth trying if you haven’t done before

I am a regular reader of your blog. The winter will come and I am looking for a pair of boots, which can be worn with jeans as well as with suit. During my search, I have found a nice pair from Herring shoes (Langdale).
But I am not sure, if they will work good with suits. I would appreciate your help!

That model won’t be great with a suit, no.
Try one with a plain calf (instead of grained – the texture on the leather), in a darker colour and without a storm welt. It can still be rubber if you want, but a thin rubber. Less broguing and an Oxford rather than Derby construction would also make it more formal.
Bear in mind that most of these things that make it more formal (and so better with suits) will also make it less suited to very wet weather. It’s a compromise – a worsted suit and calf shoes just aren’t designed for wet and cold.

Thank you for your help! Do you think a chelsea boot (http://www.herringshoes.co.uk/product-info.php?colset=1&styleid=810&shoeid=2732&brandid=6&catid=56&oldcolid=1464&stype=0&colourid=1465) would work, if I get it with additional rubber sole?

A chelsea boot would be better, yes. It’s one-piece and elastic does make it a little less formal than the Oxford boot I described above, but it could certainly work

Thank you for your recommendation! I guess I will follow your suggestion of an Oxford Boot. Do you have any shoe, which you could recommend? I was impressed by the customer service of Herring shoes, but I guess they do not have any boot, which would meet the criteria.

Most Northampton shoemakers will have an Oxford boots – Crocketts, Cheaney, Green etc.

in regard to your comments and your suggestions, it would maybe the best for me to go for a normal Oxford with Dainite sole. I already have a good pair of five years old Redwing chelsea brogue boots, therefore maybe another pair of country boots would be too much.

Now that we are on the topic of Herring Shoes. What is your take on the “made for” shoes in general? For example, the boot above is made for Herring by Cheaney and Herring also has a line made for them by Alfred Sargent, the designs of which are very similar to the designs in the AS Eclusive range. Many other retailers also have their own “made by XX for YY”, some of which are very good value for money indeed, not mentioning way better quality than some other branded shoes at the same price point.

Some of us are not fortunate enough to live in the UK and have unusual sized feet so we have to depend heavily on online retailers and don’t have the chance to easily find out the most suitable lasts and fits. To mitigate the financial risk of spending a considerable amount on less than ideal sizing by ordering, say, Herring by AS instead of the real thing is quite tempting.

Are you able to make any general comments on the quality of the made for vs. the real thing or is it too brand specific? Also, would be very interested in hearing your thoughts on what good or evil the made for -model brings for the industry in general.

In shoes, there’s nothing wrong with it. There are only so many factories, and even less that do work for other brands. The quality is normally similar to the brand of the factory, but it can vary a bit (if the customer specifies a certain leather, make detail etc)