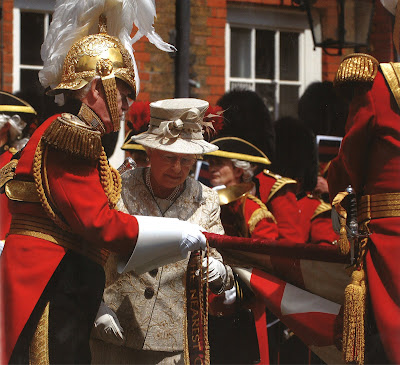 At 7:30am this morning Andrew Brett and the other staff of Gieve & Hawkes’s military department dressed 12 members of the Queen’s bodyguard at Buckingham Palace.

The uniforms were carried over from No 1 Savile Row last night, via St James’s Palace. The uniforms, pictured above and normally stored in the Gieves basement, are incredibly heavy, with lengths of gold braiding, metal shoulder plates and ornamental bags. They also have specific boots (by Maxwell) and plumed helmets. Each plume is two or three swan feathers, sewn end-to-end by hand.

Normally the Gieves staff would dress the bodyguard (The Honourable Corps of Gentlemen at Arms) on Savile Row. Some of their number go out in uniform once or twice a month. But today security around the Royal Wedding makes this impossible. In fact, once he has dressed the bodyguard Andrew will be locked in the room all day, as the Palace is locked down. He will be let out in the evening when the guard return.

Let’s hope there’s a TV in there. 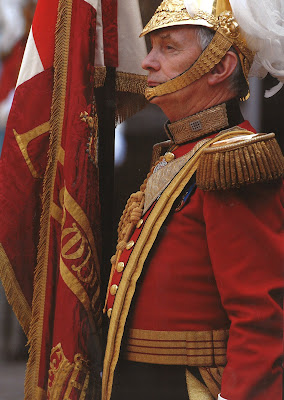 On a separate note, and to expand on the previous post on Gieves’s refurb, it was interesting to see how archive pieces are influencing the bespoke models being put together by head cutter Kathryn Sargent and CEO John Durnin.

These include a double-breasted suit in a 6×3 mode, but with an easy roll to the middle button when the top is left undone. Its back is done in three pieces, like a frock coat, finishing in two inverted pleats (pointing in to the middle of the back). A single-breasted in the same line features square fronts and a central pleat in the back, which looks like a single vent until it opens. Both are work in progress, but they show interesting ideas. And I do think tailors benefit from having inspiration pieces like this  around.

The pieces are inspired by military uniforms now dug up and on display. Just as interesting, however, are new items that have been made using old patterns from the archive – Edward VIII’s tails, for example, in midnight blue. Or a couple of extravagant navy overcoats with so many overlapping pieces that John and I had trouble working out which were decorative and which functional. Photos of all this to come.

You can follow the discussion on The Gieves staff locked in Buckingham Palace by entering your email address in the box below. You will then receive an email every time a new comment is added. These will also contain a link to a page where you can stop the alerts, and remove all of your related data from the site.