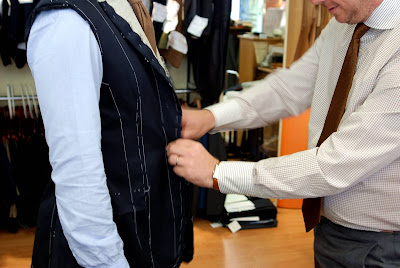 A cotton suit, or at least jacket, should be a staple of casual summer wear.
Cotton is often derided by fans of bespoke because it has no drape and wears out quicker than other fabrics. But the issue of drape – how the cloth falls across your body – is really one for more formal clothing. All cottons, whether corduroy, gabardine or moleskin of any weight, have too much body to drape, and so does suede, leather or any other material used for casual jackets.
Cotton certainly wears out quicker than wool or linen, despite costing roughly the same to have made bespoke, but a cotton jacket should have a lived-in feel. This is one of its charms. It softens and moulds in a very different way to canvassed worsted or flannel.
In an age when men frequently where their worsted suit jackets with casual trousers (no!), have negative associations with linen and tweed, and don’t know much about the other choices, cotton is a good option. Particularly gabardine, as shown here, which has a smoother finish applied to it, or a cashmere/cotton mix made up into corduroy or similar cloth. Zegna makes some lovely examples. 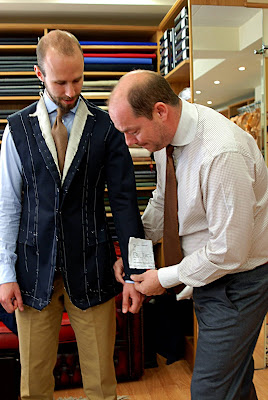 This navy garbardine suit is being made by Choppin & Lodge, an old tailoring name that has been resurrected by Richard Wainwright (pictured) and Paul Wilkinson. Both working as visiting tailors previously, and currently with premises below Graham Browne in the City, it’s fair to say Richard and Paul add a certain dash to the style of bespoke suits. While perfectly capable of making a good solid business suit, they have more of a penchant for colour and soft tailoring. My other commission from them is a navy topcoat – but in luxurious vicuña and lined in Pongees silk. Some of this taste comes from Richard’s background, which is as front of house at Huntsman, Gieves & Hawkes and Chester Barrie.
My suit will have patch pockets, little canvassing in the chest and minimal shoulder pads. Richard ripped off one layer of the standard pre-made pads to show me how they would reduce them (see below). It will be half lined and, in line with that penchant for flair, use a houndstooth shirt cloth for the lining. 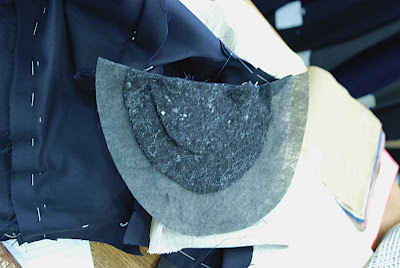 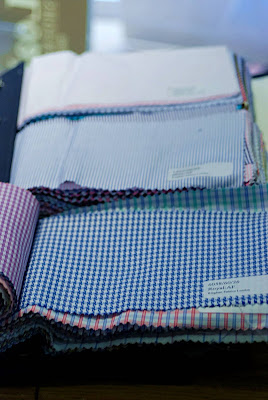 Choppin & Lodge’s quality of make is on a par with Graham Browne, and indeed Russell is cutting some suits for them at the moment. This suit cost £875, but more standard commissions can be less.
A cotton suit isn’t for everyone. In navy, I think it is a nice subtle change in texture and preferable to navy linen. But everyone should consider a cotton jacket. 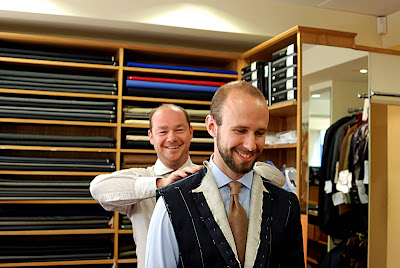 You can follow the discussion on Choppin & Lodge cotton suit by entering your email address in the box below. You will then receive an email every time a new comment is added. These will also contain a link to a page where you can stop the alerts, and remove all of your related data from the site.