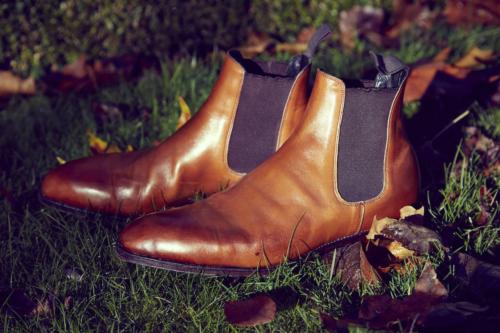 As mentioned back in October, I recently had a pair of bespoke Chelsea boots made by Tim Little – the owner of Grenson shoes, who also runs a smaller label under his own name.

I was interested in Tim’s bespoke offering primarily for the cost. At £1950 (and £900 for every subsequent pair), it is much cheaper than the other, better-known makers in London. This is partly due to the small, occasional nature of the bespoke business, and partly to the quality of the materials and finish.

The hope, therefore, was that this could be a bespoke option for anyone looking for a bespoke fit without all of the aesthetic details.

That hope, I’m pleased to say, has been largely fulfilled. 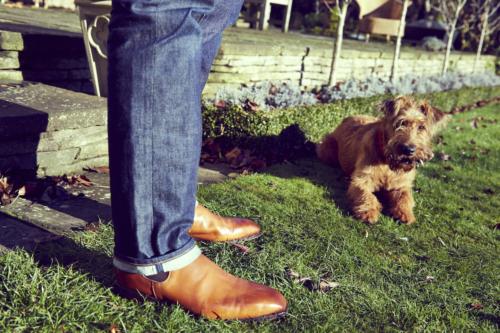 The boots are tan Chelseas with an extra-wide elasticated section. During the fitting process, it became quickly clear that I needed this addition to deal with the proportions of my feet: relatively wide, with narrow ankles.

The fitting (we only needed one, but there can be two) was good in many ways. The front of the shoe was perfect: nice chiselled shape, with just enough room for my toes to move comfortably. The shape through the back seam was beautiful: given my narrow ankle, that line up the heel and into the ankle had an exaggerated curve. And the instep was fine: it needed some excess taking out of the arch, but only a little.

There was one problem though. I couldn’t get them on.

The boot fitted perfectly for the foot and ankle, but didn’t allow enough space to get the former through the space for the latter. 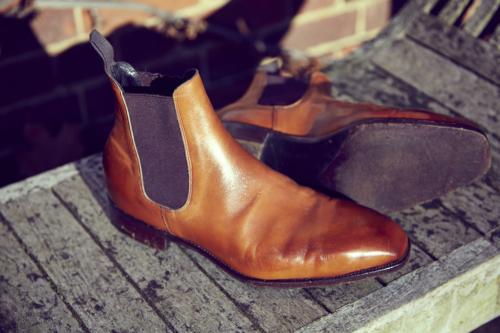 We cut the elastic in order to get the boot on and assess the rest of the fit. Then we calculated how much the elastic would have to be enlarged.

When I picked up the boots, it was, frankly, still a struggle getting them on. But in the weeks since the leather has softened up, and they are now perfect. Tight enough to make sure the foot is held and doesn’t slip forward, but loose enough around the joints and toes.

As to the look of the shoes, you can see from the images here the lovely colour of the leather and the solid make, including a nice, trim welt. While both the welt and sole are hand sewn, however, the waist is simple and square. There is no bevelling or tight cut to the upper as you would get with Cleverley, Gaziano and so on (although not with John Lobb). 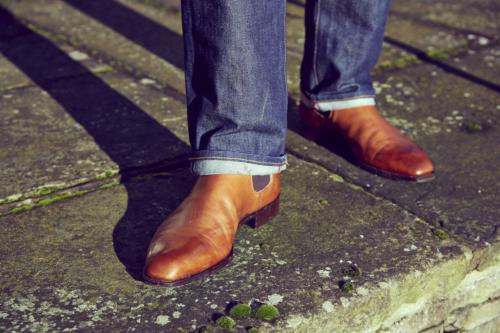 The fit through the ankle has already been mentioned, but it is also nice how the fit through the arch was improved after the first fitting. You can see that attractive curve along the inside of the shoe in the image above. This level of fit was particularly interesting given that Tony Botteril (the measurer) uses Springline to make the bespoke last, rather than an internal lastmaker.

Elsewhere on the quality, the leather of the upper is good, but not quite as fine as other bespoke makers or high-end RTW such as Edward Green. (This is most obvious in how it polishes.) And the three-piece shoe trees that we made were rather too big; but we can correct that later.

Overall, the boots were great value and I’d highly recommend to someone looking for a bespoke fit at a more affordable price. 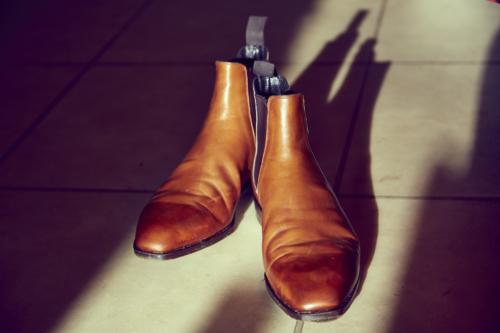 You can follow the discussion on Tim Little: bespoke Chelsea boots by entering your email address in the box below. You will then receive an email every time a new comment is added. These will also contain a link to a page where you can stop the alerts, and remove all of your related data from the site.