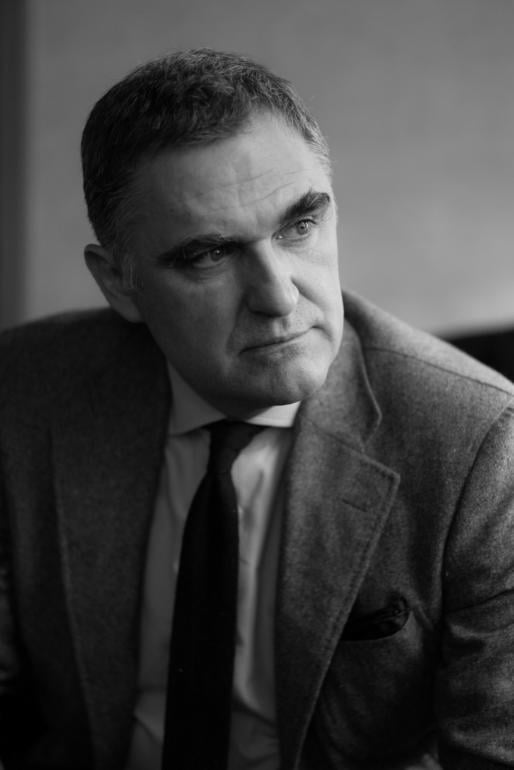 A couple of months ago I sat down with Gregor Thissen, Executive Chairman of cloth merchant Scabal, in Brussels after a tour of the factory. You can read more about Scabal and that factory on my first post here.

Permanent Style: I’ve always found there’s quite a lot of ignorance of the role of cloth merchants like Scabal, and a conflation with actual mills. How would you describe the role of the cloth merchant today, and its benefits for the consumer?

Gregor Thissen: Service is the main thing. A tailor will get some kind of service if he orders cloth directly from a mill, but a cloth merchant is set up specifically to provide a high level of service. There is greater availability, and greater personalisation. We know all the tailors personally, and can provide any length of cloth up from a single metre.

We can also quickly provide small samples, and we provide a level of quality control, checking consistency of colour, of handle, on top of what the mill already does.

And how does the end consumer see that?

Well, there’s less chance that things they order won’t be available, and that two suits from the same cloth will be different shades. The service he gets from his tailor is very dependent on the service the tailor gets from the merchant.

I would also argue that we provide a form of education to tailors, making them aware of how certain cloths perform and make up, if they haven’t used them before. We have the time to do that, as we have a bigger service department and as a result are closer to the tailors.

How important is the design input from a merchant?

It’s crucial. A mill might stick with the same classic patterns and colours year after year, while a merchant has a full design team looking to capitalise on trends and innovate constantly. We carry 5,000 designs at any one time, and rotate a proportion of them every season.

There will also be a certain ‘handwriting’ or style to the collections from a single merchant - as one designer (Michael Day in our case) is overseeing all of it.

Is that not hard to do across the full range of materials and weights - from a heavy tweed to a summer cotton? Is it not easier for the mills to be consistent in that regard?

It’s certainly easier for them to keep consistency, yes, as they have a narrower range and often change less. But I’d argue we have a consistent style across the full range of cloths, no matter what it is.

For tailors, I think the benefit is then that they can carry the full Scabal range and know what style they’re getting from all of it. Certain things might go together better, like a jacket and trousers - or if they’ve sold one summer jacket to customer, they know there are lots of other similar options they can offer next time.

And the size of our range means that the customer can get literally anything he wants, from vicuna to cashmere to tweed.

But the end consumer is likely to feel they can already get that full range of cloths, just from a range of different mills or smaller merchants.

Perhaps, but that’s where the range combines with the other benefits of design and service. You won’t get that consistent handwriting across different mills, and a tailor won’t be able to order all of those things as quickly and easily, or in such small volumes, from everybody.

How important is size and capital to that offering?

It makes a big difference. To offer a range as broad, deep and luxurious as ours requires quite a lot of financing, and that’s something a smaller mill or merchant often can’t do. It’s often the main reason their offerings are that much narrower.

How much does your business vary around the world?

It varies a lot, and that’s not easy to keep on top of. We were talking earlier, for instance, of a certain strong shade of blue that seems to be everywhere at the moment - popular for weddings but also just for day-to-day business.

That’s a global trend, but there are very few of those. Most trends are very local and specific to the culture.

Another thing we were talking about earlier was how dependent this business is on numbers, charts and forecasting. Given the number of orders going out every day, there must be an awful lot of data to keep on top of.

There is - we’ve been tracking that strong blue for years now, and expected it to die off this year, but it’s still going strong.

The data also gives us a very precise idea of the costs of different parts of the business. I know exactly how much all those thousands of pieces of cloth downstairs cost us every day, for example.

But inventory is not something we’ve shied away from. It’s a core offering of a cloth merchant, as we just discussed, and it’s actually something we’ve invested more in in recent years. Personally, I think this is one reason we’ve been successful recently, in that we’re increasing inventory when others are trying to reduce it - particularly mills and tailors.

If we just had one of these things - design, service, inventory, brand - we probably couldn’t justify being here. Particularly in this age of digital communication, and the speed of international transport. You could be forgiven for thinking a cloth merchant is anachronistic. But with all those elements together, it works.

What is the split of the Scabal business?

The vast majority is supplying cut lengths - to bespoke tailors and made-to-measure companies. A small proportion is used in ready to wear. Of the cut-length business, perhaps 20% is tailors, as the volumes are so much smaller.

And do you keep the business of the mill [Bower Roebuck, in Huddersfield] separate from the merchant side?

Yes. Not everyone does that, but we like to keep the two very separate. So the mill can sell in their own right to designers, to brands etc. And we focus just on the merchant side, of which the vast majority is cut lengths.

I think it’s fair to say Scabal’s reputation is for particularly fine worsteds, for high Super numbers in both jacketings and suitings. Is that something that concerns you?

Well, we’re aware of that reputation, and it’s something we talk about a lot. Although as we’ve discussed it’s rather a misrepresentation given the breadth of what we have on offer - from very rustic, naturally finished cloth to those superfines.

Talking about superfines though, it’s worth noting that the superior quality of the raw material is not just the microns, which often get the most attention. It’s also about the crimp of the fibre, the pureness, the tensile strength. Then the final cloth is affected by the setting, finishing etc.

But that’s all about marketing, surely? People focus on the micronage because that’s what all the cloth merchants have been talking about for years. And there’s now more competition in that area, so the focus is being shifted to other factors.

Yes, absolutely. I think it’s also getting easier to get a more complicated message across, though, as men are taking a deeper interesting in their clothes and the cloths that make them up.

How have you found interaction with your business changing with the growth of social media? For example, I know my readers now often order cloth based on seeing it made up on their friends or people they follow. But if a cloth is only around for a season, and it takes a season to make up the suit, that precise cloth is never available.

We’re aware of this issue, and do keep cloths around for a good deal longer than a season. Normally they’d rotate every two years at the earliest.

And we’re doing more on social media as we feel it’s a good platform to communicate these more complicated stories we want to tell. It gives consumers an opportunity to react and ask questions, unlike a simple print ad.

Do you plan to sell cloth more to end consumers?

We sell a little bit online at the moment, through direct enquiries, but we don’t tend to encourage it as we don’t really have the infrastructure to support it. We’d like to do it more in the future, but not yet.

Do you think it’s dangerous to buy cloth online? So much of the attraction in cloth is tactile, or depends on the light you view it in.

I agree, you really need to sell it through a sample process. Cloth is very technical, and it’s hard to communicate online.

A lot of others have tried to sell cloth online and failed, both because of this level of technical communication and because of the interaction required with each customer, for often a very small return.

Do you think cloth merchants should have more retail shops, to encourage customers to go in and feel cloth for themselves?

Yes, absolutely. We have the shop on Savile Row, which people can go into any time. And most of our agencies and branches around the world encourage the same thing - in New York, in Paris, in Osaka. But it’s perhaps not that widely known about.

Of course you don’t carry stock there - just the bunches. But I know that can be useful in places like New York, given the relative lack of bespoke tailors with cloth books to browse through.

True. We’ve always tried to emphasise a local presence, whether it’s our office or just that of an agent.

And it comes round again to our original talking point - the value of a merchant. Through these locations we have a local connection to the market and understand the culture. It’s very hard to serve a local market effectively without that.

You can follow the discussion on Interview: Gregor Thissen, Scabal by entering your email address in the box below. You will then receive an email every time a new comment is added. These will also contain a link to a page where you can stop the alerts, and remove all of your related data from the site.

I think black linen can be quite cool, though not as versatile or easy to wear as navy, olive, cream or most other colours. Personally I wouldn't wear a suit like that with just a T-shirt underneath, or with trainers. But if you were going…

Good point. I'd say in Madrid I noticed a larger number of classically dressed men than almost anywhere - including London

It could be either - it's a long way from a regular tailored jacket, but there could be a little canvas in there perhaps. Clearly the jersey-type version of it is not one that appeals to you though