Criticism of what people wear to black-tie events tends to focus on obvious sins: wearing a lounge suit, wearing a coloured tie and wearing a long tie instead of a bow (though this is less objectionable than one may think). These are some of the biggest sins against the traditions of the dinner outfit, and stand out as such. They also stand out because they are committed by a relatively small number of people.

For that reason, I don’t think they are the greatest black-tie sins. They’re big, but they’re rare. More important are the small sins committed by almost everyone. Those demonstrate how disconnected the ensemble is from its traditions, despite the apparent uniformity on display.

This is the greatest sin, so it comes first.

Every black-tie outfit needs to cover the waistband of the trousers in some way. That is an indisputable fact. This covering can take one of three forms: a waistcoat, a cummerbund or a double-breasted jacket. 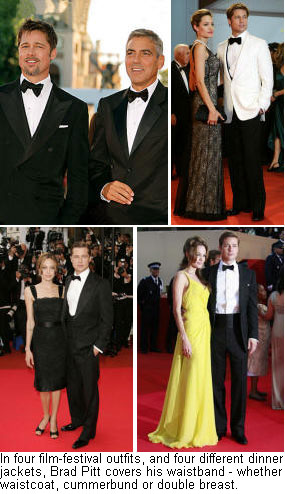 A waistcoat should be the standard. If you’re wearing a single-breasted dinner jacket, something needs to cover up your shirt – particularly if the jacket only has one button.

A shirt with a stiff, oval front makes this obvious: only the stiff part is meant to show, the rest is covered up by a waistcoat. But even a soft-fronted shirt needs a covering. Even though its pleats form a rectangle on the front of the shirt, and even though they go all the way down to the waistband, that waistband must be covered.

This waistcoat can be black or white. White is less common and more formal, echoing as it does white tie or full fig. It can also be full or backless. If white, it should be made of the same Marcella as the shirt front. If black, it should be the same wool as the trousers.

The cummerbund was invented in the subcontinent as an alternative to the waistcoat for hot weather. It was originally a sash simply tie around the waist.

But what proportion of men at a black-tie event have some form of waist covering? Twenty per cent? Fifteen even? That’s why it’s the greatest sin.

Most suits have notch lapels; dinner jackets should not have them. At some point, the black-tie industry forgot, or simply got lazy, and conflated the two.

A peaked lapel is more formal, aggressive and rakish. It suits black tie where it wouldn’t suit the decorum of day-to-day business. All dinner jackets, single or double-breasted, should have peak lapels. Yet a significant number (40%? 45%?) of men at a black-tie event will have notch lapels.

(Eagle-eyed readers will notice that my own velvet jacket, worn as black tie, has notch lapels. What can I say? My wardrobe is far from complete and the jacket was a vintage piece to trial a look. It’s on the list to upgrade.)

The best shoe to wear with black tie is a patent pump with a grosgrain bow. Second on the list is a patent Oxford. Third is a plain black Oxford, without brogueing and preferably wholecut. All three are acceptable but are less impressive further down the list.

Yet how many men wear pumps? Probably zero. How many patent Oxfords? Perhaps 10%. And of the remainder wearing black leather shoes, there is probably a healthy chunk (again, perhaps 45%) wearing brogues, Derbys, boots or monk straps. So another low-level but popular sin. Multiplying number by grade of sin makes it a greater offence than a long tie.

You can follow the discussion on The three black-tie sins by entering your email address in the box below. You will then receive an email every time a new comment is added. These will also contain a link to a page where you can stop the alerts, and remove all of your related data from the site.

I've had two 3-season suits made on Savile Row with jackets lined with pure silk. One is lined with elegantly patterned silk lining the well-known SR tailor (you have reviewed them!) had on hand. The other -- made in flannel -- is lined with 22…

Perhaps. Charcoal worsted would be easier because the textures would be different. And I'd make sure in either case that there was some rich colour like navy or brown going on elsewhere, so the whole thing didn't become too tonal

Sorry, I'm not sure what you mean by the 6 and 4? I would add, though, that once you get down to 1cm it's really not worth bothering with and won't be noticeable. Materials change that much just when they warm up, and any shirt…

Hi Josh, I like a lot of the looks, and am a particular fan of the sportswear from that period. The tailoring proportions would look a little dated if worn today though, so I find it's best to take inspiration from one or two small…