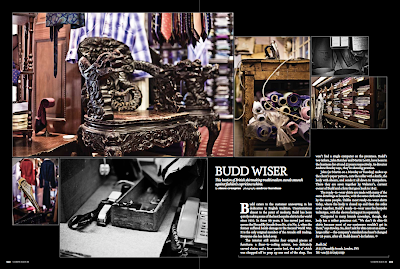 Budd shirtmakers is for men that really like English tradition. Unostentatious almost to the point of modesty, Budd has been quietly making some of the best bespoke shirts in the world since 1910. In those 99 years it has moved just once, across the Piccadilly Arcade from number 4 to number 3, when the former suffered bomb damage in the Second World War. It is the only original member of the Arcade still trading. Everyone else has faded away.

The interior still retains four original pieces of furniture: a floor-to-ceiling mirror, two delicately carved chairs and a four-poster bed, the end of which was chopped off to prop up one end of the shop. You won’t find a single computer on the premises. Budd’s two tailors, John Butcher and Martin Levitt, have been in the business for 46 and 52 years respectively. As director Andrew Rowley says, they’re showing promise.

John (or Martin on a Monday or Tuesday) makes up the client’s paper pattern, cuts the collar with a knife, the body with shears and sends it all down to Hampshire. There they are sewn together by Webster’s, current owner of Budd and a firm that itself goes back to 1847.

Compared to many brands today, though, the body has a rather generous cut. “We don’t do slim-fit shirts because most of our customers wouldn’t get in them,” says Rowley. So don’t ask for slim cuts or an extra large collar – the company’s standard one hasn’t changed for 26 years, after all. Budd doesn’t do fashion.

yeah but we didn’t see any shirts.
by the way can you contact me on email.I wantto ask a couple of questions

Hi Simon. Hoping you can help me with some advice. I have been a (happy) wearer of C.Tyrwhitt shirts for many years but am considering moving up in quality. I enjoy well made clothes and have a few (city made) bespoke suits and now with not wearing business shirts 5 days a week can afford to spend a bit more on shirts. I’m happy to pay anything between £125 – £250 for a quality shirt, but am also keen not to over pay if I don’t need too. I’ve looked at emmett and budd shirts (although based on reviews I’ve seen they don’t really seem to do more contemporary slim fits) and have also looked at online made to measure brands e.g apposta. I also checked out suit supply too, but found them similar quality to CT, albeit a bit more money.

I’m in my mid thirties and am slim so like a tailored / slim fit look, although have for sure moved away from the very slim styles I was probably guilty of in my twenties(!). I generally like just the standard poplin white, or blue / pink bengal and I’m a fan of cutaway collars and double cuffs.

Any advice on where might be the best places to check out? . I’m seeing them as a bit of an investment, so want them to be good quality and last (and also not to difficult to iron!)

Would really appreciated any pointers.

To be honest I’m not great in this category. I only have MTM shirts, from visiting shirtmakers (see three compared here).

However, I would say that there is not a big difference between brands like this for ready-made shirts. I would buy on materials you like, and fit or style, rather than perceived quality. Spend more on shoes or suits, but not shirts.

Emma Willis is hard to beat in this price range. I’m really happy with mine(brushed cotton). She has a contemporary slim fit. It is really useful to visit her shop.

I prefer to spend my money on good shirts as I’m often jacketless. Just check that the collars don’t collapse if you are not wearing a tie.

Or,I will say it as Simon is too modest, the PS button downs are outstanding (but don’t quite fit your preferences).

Thank you – will check out Emma Willis

That’s really interesting Simon – I’m half with you, but you do get quite the difference in quality for RTW shirts, particular for OBD and more casual. Trunk and Luca Faloni do great staples, with the PS ones and Luca Avitabile a step up again.

They’re all a bit more casual though and not for a worsted suit. Do you mean the classic white business shirt is less difference?

That’s true on the comparison to the PS/LA ones – I guess I wasn’t really talking about stepping up to the level of handwork, hand-attached sleeves and collars etc. More just going to a more expensive machine-made shirt, where there are some fine touches, but the biggest difference is often just finer (which is not necessarily better) cloth.

Simon – many thanks – I find CT meets all my needs in terms of fit, colours and fabric, particularly as they now have a mtm service which means you have complete choice over combinations of collars / cuffs and fabric / colours etc. for around £80.

What I meant by better quality was, I guess, just that they may last longer (I find after 6 months or so the CT ones lose their crispness, particularly around the collars / cuffs, although with changes to work arrangements, this will of course stretch the lifespan out further).

I therefore thought better quality may last a bit longer and the fabric may feel / look ‘richer’. E.g is there grades in comparing 100% poplin between CT and a brand like Emmett or Emma Willis? In the way there may be, for instance with cashmere.

I often go jacketless in the office which again was the reason for looking out for any possible improvements.

If not, I may just stick with CT in that case and save my money for as you say shoes and suits, which I agree the difference in quality / craftsmanship is exponentially better.

Any one else recommend any other RTW brands to try?

There will be small differences between the ways the collars and cuffs, for example, are made, but really there won’t be a necessary improvement in the quality of the material. It’s not like cashmere, in that there’s nothing wrong with having something less fine – a cotton like that will just feel less silky, and in fact often last longer because it’s not so delicate.

There are other benefits, like being made in better places, perhaps, better labour conditions, sometimes sustainability too. But not necessarily.

If you’re at the stage you are, and trying to upgrade things, then I would do so with shoes and suits first, certainly

Also, to add, my interest in the craftsmanship of something like a plain poplin business shirt , whilst I appreciate it, is not a buying factor for me. I have no problem buying a mass produced machine made shirt over a hand stitched one if it looks and feels as good and I have the choice to get the colour / fit I like.

For me, a suit is different as stiched vs fused lasts longer.

From what Im reading, this may not be the case with shirts?

Not usually, no. I like fusing even in the most expensive shirts. There is certainly cheaper and more expensive fusing, and perhaps you will get an improvement there, but I would have thought CT would still be OK