Continuing the Edward Green theme of last week, a recent acquisition of Asquiths had been proving rather uncomfortable so I took them with me to Northampton to get some advice. This resulted in two tips on fitting.

First, half brogues can be uncomfortable on some people if the gap between the toe cap and the facings is too small. There is too little room for the foot to flex, creating a sharp crease that can hurt the joint of the toes. As you can see on the photo below, the gap on my Asquiths is far smaller than the wing-tip behind them (and would be even if those shoes were Oxfords, not Derbys). 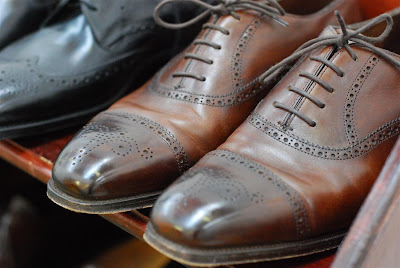 This seems to be a problem for me because my big toes are rather large, making them closer to the upper and therefore more sensitive. For most men it won’t be an issue, but if do find half brogues uncomfortable, this may be why.

Second tip, if you go up one size (length) but down one fitting (width), the width will remain roughly the same. You’ll just have a longer shoe. So if a pair is uncomfortable at the joint or in the toe-box, this can give you more room to wiggle while retaining the necessary snugness around the in-step.

I tried this method with the Asquiths, going from an 8.5 to a 9 but dropping the fitting from an E to a D, and the fit seemed to be much better. I don’t think I ever experimented enough with widths, assuming that as an E fitted me fine on some shoes or sizes, it would do for all. But fittings can vary between shoemakers just as much as sizes. So try all the permutations.

Thanks to John Garner for his time and help.

Finally, I thought I’d share a few snaps I took in the leather room at Edward Green. Though not necessarily known for their exotics, they have an astounding range of leathers and make some very unusual bespoke shoes. 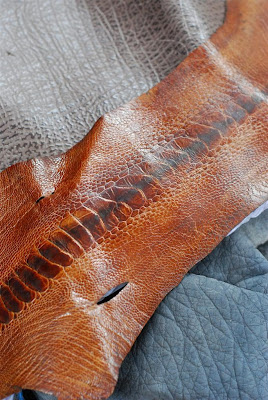 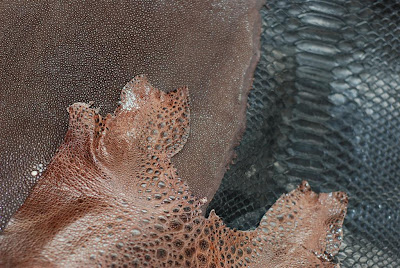 The first shot is of (left to right) elephant hide, ostrich leg and Indian shark, and the second of stingray, bullfrog and python. As they say, anything with its back facing the sun. 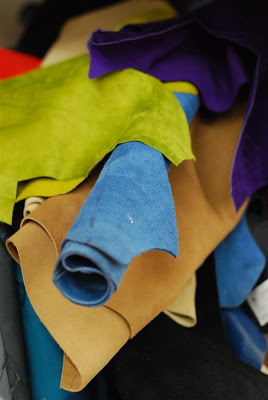 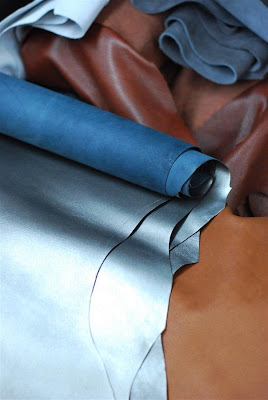 The third is of some bespoke suedes ordered for slippers and the fourth of a calf leather with a metallic finish that, again, was a special order. This effect is achieved in the same way as the corrected leathers that some cheaper shoemakers use – sanding down the skin and then spraying it with a finish to give the impression of a perfect hide. The problem is, it won’t burnish in the same way as an untreated hide (not that that’s a problem with metallic silver).

You can follow the discussion on Edward Green: Tips on fitting by entering your email address in the box below. You will then receive an email every time a new comment is added. These will also contain a link to a page where you can stop the alerts, and remove all of your related data from the site.