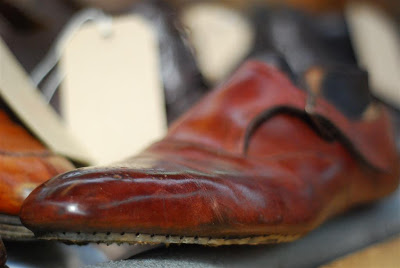 Following on from my recent post on Globe-Trotter suitcases, this is a look at how my Edward Green Oundles are being refurbished at the company’s factory in Northampton.

They were probably my first pair of really good shoes, bought about five years ago. Though as the collection accelerated fairly quickly, they’ve only just had enough wear to need resoling. So I took them up to Edward Green last week to see it being done.

First, the sock is ripped out in order to be replaced later. Edward Green uses a half sock as standard but can replace it with a half or full.

Then a hammer and chisel is used to pry off the heel. It’s not easy work, fighting against several pins and a fair amount of glue; but after three or four hammerings the chisel gets far enough it to lift the heel stack off. 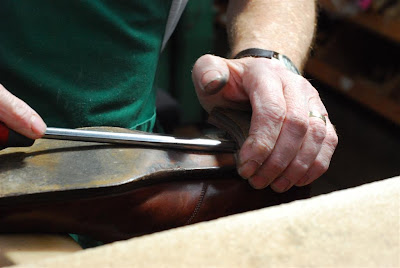 Next is the painful bit, for me at least. The back of the sole under the heel is ripped off with a chunky pair of pliers, with a wrenching sound as the tacks give way. It’s quite an emotional moment – this is my favourite pair of shoes remember, with the investment of 30 or 40 polishings and my foot printed comfortably into the insole. 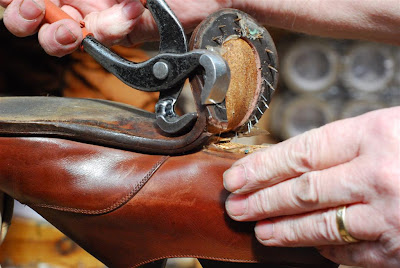 A knife is then inserted between the welt and the sole, slicing the stitches so the sole can be lifted off. 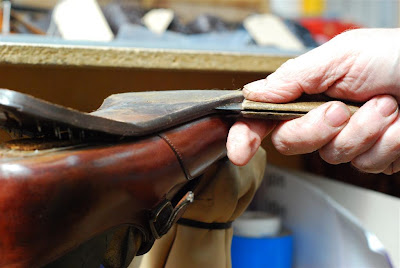 Once that is all removed, the cork filling is chiselled out, taking care not to damage the ribbing that runs around the inside (the white serrated canvas you can see at the edge). A little bit of damage to the ribbing, such as the part lifted away on my shoes in the image below this one, can be glued back down or patched with a small length of the stuff. 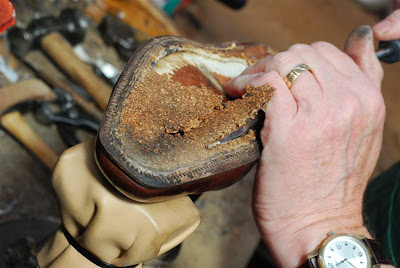 But any greater damage requires the insole to be taken off to add new ribbing. This is a shame, because it means replacing the insole with a new one and losing the comfortable imprint created by my foot. (You can just about see the indentation created by the ball of my foot in the picture below.) 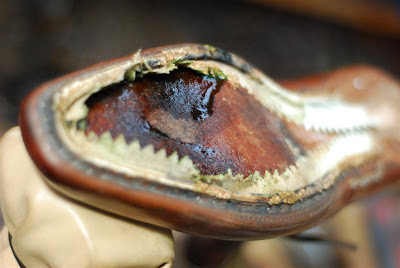 Replacing the insole and ribbing also means relasting the shoe, which can create problems as the upper will inevitably have shrunk over time. Even using a last that’s a half size smaller, there’s a danger that the lasting will be done too tightly. This isn’t a big risk, but it does create needless complications.

That’s also a reason you should take your shoes for repair as soon as you can see the cork filling through a hole in the sole. The cork, being shredded and rubbery, can just fall out – leaving you walking on the insole. Once that happens it has to be replaced in the refurbishment.

The next stage is removing the welt, which can just be ripped off, and taking out the thread – which requires slicing it near the heel and pulling all the loops out of each hole. 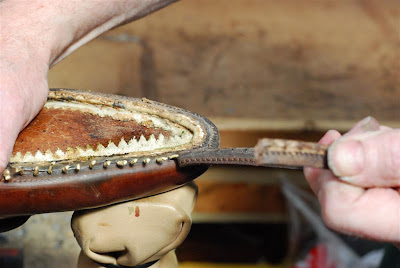 You can follow the discussion on How great things age: Edward Green 1 by entering your email address in the box below. You will then receive an email every time a new comment is added. These will also contain a link to a page where you can stop the alerts, and remove all of your related data from the site.