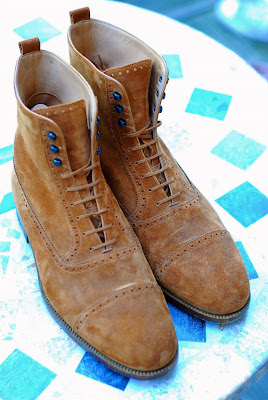 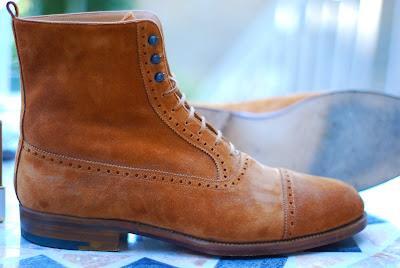 Back in October last year I was introduced to a new/old shoe brand called Rivolta. A Milanese name that goes back to the 1880s, it was forced to close down in the seventies, only to be restarted last year with an interesting twist – they proposed to use digital scanning of a man’s foot to produce personal lasts and one-off orders – effectively bespoke shoes. More details are in my original post.

Rivolta had been part of a European-wide experiment to use digital technology to create made-to-measure clothes efficiently and therefore spread their availability. The scanner is similar to that used in Lodger in the UK, though with more detailed analysis and obviously more reliance on the technology to create a perfect fit.

A few months after I had met the guys behind the brand in Milan, and written that first piece, they offered to make me a pair of shoes to show how the process worked. They normally cost around €1000 but only take a month or so to make because of the automation. It took a few months before I was back in Milan, and then a month or so to make the shoes, so I received them in April this year. 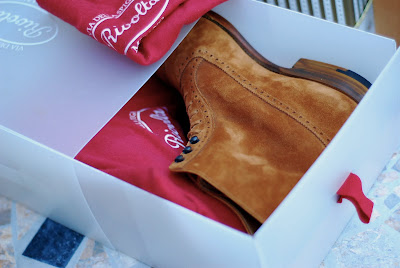 I opted for dress boots, half-brogued in a gingery suede. When they arrived I was pleasantly surprised by the aesthetics – many of the models in the catalogue and the shop can look old-fashioned: round-toed and perhaps a little clunky. But the boots were just beautiful. A very soft suede, wonderfully finished, with an extraordinarily butter-soft lining. Nice laces, nice packaging, nice touches like cross-hatching on the soles.

But the fit was not great. They were both short and narrow, pinching my little toes and crunching the ends of all of them. They just didn’t seem big enough – confirmed by comparing them to other great-fitting (though admittedly not bespoke) shoes. I struggled manfully on for a couple of days but they just weren’t wearable. I informed Silvia at Rivolta, who was puzzled but apologetic.

She kindly offered to try and either correct or remake them. I didn’t hold out hope of correcting them – it is almost impossible to add length to shoes, much easier to add width as the leather stretches more across and isn’t confined by the toe puff or heel stiffener. My hunch was correct – they needed to be remade and it would take another month or so. Silvia mentioned using a different algorithm to asses the scans of my feet (three separate ones had been taken for each foot, both sitting and standing up).

I got them back last week. The fit is much improved. My toes are no longer pressing against the end of the toe box, though it is perhaps a little narrow still, and across the joints it is tight rather than snug, but definitely wearable. Given the softness of the suede, I think the fit will be fine after a half-dozen outings. Using some slightly over-sized full-wood shoe trees will help too.

The boots are just as beautiful as ever. A gorgeous texture with grey suitings or jeans, with a fineness of finish that suggests old-fashioned models perhaps harking back to Rivolta’s beginnings. I’ve only ever felt such delicateness on women’s brogues, which are naturally smaller, or old examples of bespoke seen at Cleverley’s or at the museum in Northampton.

They’re not exactly bespoke, but I do love them. 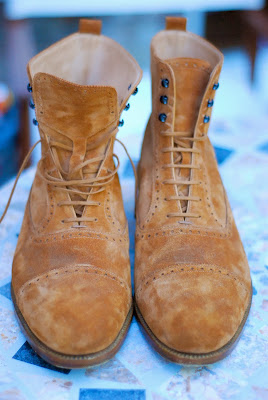 You can follow the discussion on Beautiful semi-bespoke boots from Rivolta by entering your email address in the box below. You will then receive an email every time a new comment is added. These will also contain a link to a page where you can stop the alerts, and remove all of your related data from the site.

It's certainly rare, and I think I made my feelings on it clear in the piece. But I also don't mind logos when they're there for a reason - because you want to state or support something. Hence a teddy bear RL sweater or an…

The issue historically with Salva was service and consistency more than anything else. His eye for fit is good, and I recently tried him again as he said he had improved the service side. The result was very good, particularly the fit - hence the…

They're not me, to be honest. I definitely see the appeal, and they can look cool, but the style is a little too unusual

Yes. Still classic, but with some modern awareness. I'd say it was better in terms of overall fit and make too