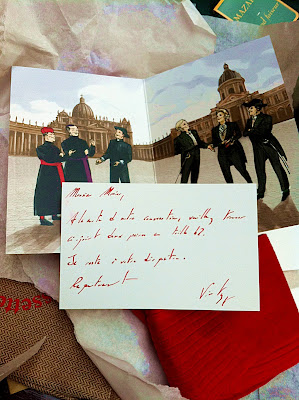 Jacques Tiberghien and Vincent Metzger discovered the small house of Gammarelli in Rome several years ago. Although only a small workshop, it makes all the outfits, from robes to mitres, for the pope, cardinals and bishops of Rome.

Jacques and Vincent were particularly taken with the red socks – worn, of course, by the cardinals. They bought 100 pairs, thinking several friends would like them too, sold the lot and went back to Gammarelli asking for more.

Although the tailoring house was understandably suspicious, it eventually agreed to let the young Frenchmen sell Gammarelli socks online exclusively. It was so successful that they became the worldwide agents and added bishop purple and priest black to the selection. The Pope, of course, wears white socks with his robe. There isn’t much demand for white, but if you want white then the boys can get them.

A more recent addition to the stock is Mazarin socks, initially green but now in a range of colours. The link to catholic hierarchy is that green Mazarin socks are worn by members of the Academie Francaise, the body that oversees the French language. Academicians wear a black tailcoat (made by old Parisian tailor Stark & Sons) with green olives embroidered on it. The socks match the olives.

Mes Chaussettes Rouges come in some nice packaging – a handwritten note to the customer, a picture of the catholic fathers and academicians sharing a joke, and a little woven sock bag, all in a thick envelope with the customer addressed as ‘L’eminent’. (There is an ascending scale of titles, depending on the number of socks ordered. You are eminent if you order up to 10.)

Oh, and all the socks are over the calf, made with mercerised Egyptian or Sea Island cotton, on the small traditional looms in Rome, with a hand-linked toe.

What is the web address where these socks can be purchased?

There is also an english version :
http://en.meschaussettesrouges.com/

I hope they ship to the states! Would love a pair or more 🙂

Thanks for this very nice article !
@julio : Shipping is available all over the world (but there are fix fees 3€ in Europe, and 5€ for the rest of the world, and registred parcel’s price is 15€ and 18€.)
Thanks again for the article.
Please feel free to contact us, if you have any questions : [email protected]

Are these socks “tight”over the calf or is there enough give so as not to cut off circulation for us guys who’ve had heart surgery?

how do these compare to marcoliani otc 100% merino wool socks?

its a great place to buy socks-terrific collection, fair prices and great service

Am looking at the Mes Chausettes Rouges website: when you say over the calf socks, do you mean their knee-high ones? I cannot find an over the calf category on their website.

Thanks for your reply Simon. One further thing: you mentioned somewhere what colours you should buy (navy, grey, etc) these socks in. I’ve looked all over your blog for it but cannot find it: where is it? Thanks.

I’m not sure I did Henry – I can’t remember, anyway!

I think I probably meant this: https://www.permanentstyle.com/2010/10/wine-red-socks-with-a-grey-suit.html. Does your advice still stand? Ta.

Ah. Yes, it would

Hallo again Simon (you must be getting bored of me by now!),

Do you have any experience of Drake’s calf length socks? https://www.drakes.com/accessories/socks

How do they compare with Mes Chausettes Rouges, if at all? Ta.

I don’t have any, I’m afraid, but you’ll find them very similar to the likes of Bresciani on Mes Chaussettes Rouges. There isn’t much difference in quality here between brands

Where do you get your wool/Cotten blend socks? Do you have a link to purchase?

I’ve been trying to find 100% wool or wool/nylon blends but I’m starting to get the feeling they all can’t be worn during spring/summer here in California. Maybe a cotton wool blend would be better?

Do you have any 240 needle count extrafibe merino socks? If so, can you wear them during spring/summer?

I think @ 240-260 needle count, the wool would comparable to cotton in terms of thinness

I have sweaty feet and run cold so I’ll test a high thread count superfine merino version and report back.