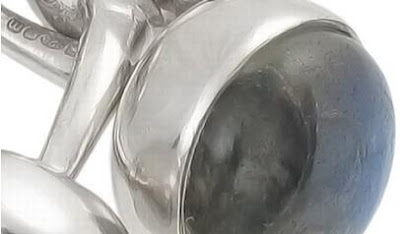 Thank you to everyone who has shown their interest in my cufflink project, asking questions about the geometry, stones and functionality, and to the 26 people that have been so enthusiastic as to buy a pair (or pairs) for themselves. As mentioned previously, I stand to make no money from my designs, but it is nice to know others out there have similar taste and similar views on the paucity of the links currently on offer elsewhere.

Examples of some responses: “I’ve received the cuff links and they are gorgeous! Thank you very much.” (Miami, US) “Thank you for the cufflinks. They are beautiful and I will wear them with pride with my black-tie outfit. All the best to you from Berlin.”

So far the pearls have proved the most popular choice, which I’m not surprised at, accounting for just over half the orders. Amber and quartz come second and third, with the faceted quartz now sold out.

There has also been some interesting experimentation with the orders, many men opting to have a pearl on one side of the link and a stone on the other. Personally, I like both sides to be identical, but I won’t quarrel with anyone that wants to experiment by mixing up the combinations.

Wearing them more myself, I’m pleased that the links are fulfilling all the functional needs I designed them for. The stem is short enough to keep the cuff tightly closed and the size of the stones means they are big enough to be noticed but small enough to slip out at the end of the day.

It was predictable that the price of the links rules them out as a casual, personal purchase for most men, but I didn’t appreciate how suitable they would be as wedding gifts, either from the bride to the groom or from the groom to his best man. Apparently weddings account for the vast majority of the market for high-end, certainly bespoke, jewellery.

This post is in no way timed to coincide with the organisation of summer weddings. Honest.

Comment and feedback is always appreciated, so keep it coming – either to myself or Diana. For those unfamiliar with the cufflink project and interested in the back story, see the original post here. Despite the welcome encouragement from readers, there are no plans to launch a range of men’s accessories under the Permanent Style brand. The only possibility is a spin-off for dress studs – more details here shortly.

The ones in amber are lovely!
Pichao, Gothenburg, Sweden

It’s funny seeing my comment posted. I’m honored, Saw and said wait that’s my comment from ”Miami,US” sent to Diana! I truly meant what I said and would love the idea of a stud set for the pearl sets I purchased. Would go perfect with my Tuxedo.

All the best,
Julio From Mia.