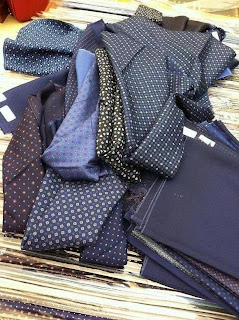 It’s easy to be fussy about ties; they are such flimsy things. One can become obsessive about getting the length right, or fiddle with the knot throughout the day. The latter, of course, undermines any impression of easy style. A perfect dimple, equally, can suggest a little too much thought and preparation.

The width and length of the tie, on the other hand, are easier to control and can reduce the need for fiddling. Being 6’1’’, standard ties are often too short for me. They are usually 146cm to 148cm and as such fall above my waistband when the two blades are the same length. There are exceptions, including Charvet and Kiton, which are regularly over 154cm.

I have had a couple of ties made to measure, including one from Will’s stock of Capelli samples on the ASW store. That green wool tie with a navy stripe was lovely, but there are few silks that take my fancy and that is what I’m after.

I was interested, therefore, to meet Maurizio Marinella while in Naples last week and try one of his made-to-measure seven fold ties. They will have this service available in the new London store, but not until the winter at least.

The shop front is famously tiny, but up a flight of stone steps is a much larger premise that holds the full range of Marinella-branded merchandise: umbrellas, perfumes, even swimming trunks. Personally, only the multi-fold ties – those made just above the shop – are of any attraction. Standard stock now includes both seven and nine folds, though the nines are only folded as such for the bottom of the tie, covering most of the front blade.

The stock of silk squares available was large, though dominated by navy with assorted patterns – unsurprising really for Italy. That was fine, because a good navy tie was what I was after, with a regular, abstract pattern spread wide enough to not clash with a Bengal-striped shirt. Having brown in there somewhere was a bonus, given how many brown accessories and shoes I wear.

I ordered the tie to be slightly wider at the end of the blade but, more importantly, to also be wider in the bottle neck. This is the centre of the tie, where it narrows, and determines the length of the knot. My favourite ties – Charvet, and some wider models made for other brands by Drake’s – have a substantially longer knot.

Michael Drake tells me that this style is more American, apparently favoured to sit better down the gap formed by a button-down collar. I can’t say I’ve ever noticed the difference, but Michael has far more experience than I.

The tie will be ready this week apparently, and sent to London. Presumably the closeness of the manufacturing helps with that quick turnaround. The small difference in price – †180 rather than the normal †160 for a seven fold – must also be affected that proximity.

Report back next week. 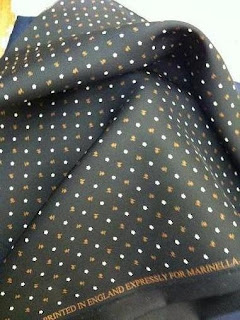