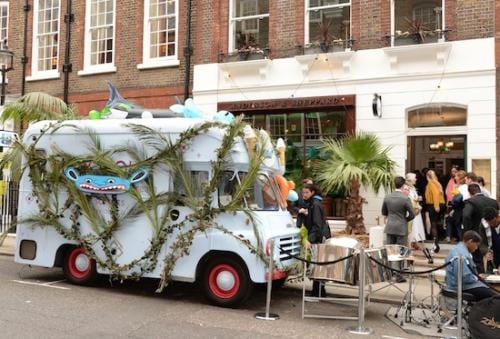 Last month there were three parties on Savile Row on the same night. Huntsman, Kilgour and Anderson & Sheppard all held events on the Monday of London Collections:Men, with very different atmospheres.

While they showed very different ideas of the best way to connect with customers, I would argue that the fundamentals of what each one was offering was the same. More than anything, they were lessons in the need for us – as actual or potential customers – to look past branding and celebrity-baiting.

Anderson & Sheppard held a holiday-themed evening with LimoLand, the beachwear brand founded by art-collector Jean Pigozzi. There were steel drums; there was an ice-cream van; Mark Ronson and Tommy Hilfiger pitched up. There were several very young people that the photographers fawned over and I didn’t recognize – always a sign of a celebrity event.

Huntsman held a far more sedate evening for customers and friends, to show off the clothes they made for Gregory Peck over a period of 50 years. It was nice, it was friendly; the average age was twice that of A&S.

And a little further down the street, two PR girls with clipboards were also standing outside Kilgour. Something else must be going on, I thought. Turned out it was a small but very chic evening to display some prototypes for Carlo Brandell’s new RTW collection, which will be in Kilgour later in the year. The whole shop had a dozen pieces of clothing in it. In the middle were the two massive, floating stone blocks that have been installed for Campbell and his assistant to cut on (below). 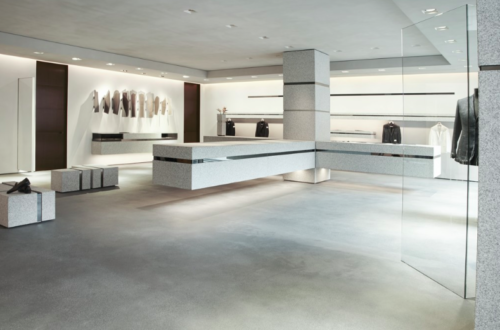 This was no English Gentleman this year – no event where Anda managed to wrangle all the Savile Row tailors into a single display for us. Instead, everyone had gone their own way. But despite the superficial differences, all of them had great clothing.

Anderson & Sheppard’s haberdashery continues to be one of (if not the) best menswear stores in London for my money. Huntsman, despite its troubles, has good-quality and now expanded RTW clothing, which I often recommend as a better bet than similarly priced suits on Bond Street – largely for the aftercare and adjustments in-house. And Carlo at Kilgour excites me just as much as he did the first time around. Simple palette, simple design and an original take on materials. One of the 12 pieces was a shearling jacket that was simply stunning.

The problems created by branding and marketing hit home last night, at the opening night for the new Dashing Tweeds store. I had just come from Gieves & Hawkes and seen the store re-fit – with its stone floors, wood panels and Roman-esque touches – for the first time. “They’ve become another fashion brand,” said one attendee. “They’ve sold out, I’m sure the quality will be terrible.”

In fact, the opposite is true. Jason Basmajian has radically raised the quality of Gieves RTW tailoring, offering a top-end line that actually befits 1 Savile Row. Of course, the prices of those new suits are double the standard range. The margins may even be bigger – but that’s a requirement if you want to sell a small number of higher-quality products.

Much of the Gieves décor is not to my taste. It’s a little too imperial, with all those ring pulls and gold nuggets. But I’m excited at having good clothing in Gieves, and frankly don’t care about the wallpaper and light fittings. I just hope everyone else can see all these tailors in the same way.

More info about Kilgour would be great in future, Simon. (And lots of photos!)

Have you had anything made by Kilgour?

Is there a particular reason?

This leads me on to my question about why you choose to or choose not to use a tailor, shirtmaker, shoemaker?

Hi Simon,
I was just wondering what your general advice on trouser turn ups is? Particularly how high they should be.
I was just having a look at the armoury tumblr and it was suggested that 2″ was a good height, I had a pair of trousers fitted at the weekend and asked for 3″ by mistake. Will these look too high? I’m sorry if you have answered this in the past but I just had a quick look at the suits section of this website and trouser advise tended to be on waistline etc. etc.
Many thanks,
Oli

Hey Oli, yes three inches is going to be too high. The Italian standard is around 2 inches, with the English more like 1.75

A question about Neapolitan tailors…will you ever do a post about Enzo Carfora? A previous post of yours mentioned the idea.

Hi,
Sorry, no there are no plans to. I met him in Naples a while back and he seemed lovely, with much promise. At that stage I couldn’t really recommend him given the standard of the work, however. I still plan to meet up with him again when I’m in Naples at some point, but I don’t know when that might be.
Thanks

Simon a question on suits during this weather. I never wear lightweight suits as offices are air conditioned these days. However getting too and from offices this last week has been hell, particularly in the tube. This has led to a problem with sweat on the back of the jacket. Yes I never wear a suit two days in a row and yes I place the suit on a wood hanger and leave it out to air (after a good brush down) but it still feels “wrong” when I put it back on two days later. I don’t want to have them dry cleaned but any ideas to get the freshness back would be welcome. My wife suggested leaving them in the bathroom to let the steam get at them – but for a midweight I am not sure this would help.

Hey John,
Steaming is certainly a good option. It relaxes the cloth and cleans it at the same time.
You can get steamers – where you hang the jacket on a provided hanger and then use a spout to pump steam all over it – but you can also do this with domestic irons, if their steam output is sufficient. Try to get close to the cloth but don’t actually press it. Hanging in a steamy shower is the fallback, though it takes a lot of steam in my experience. Being on the other side of the bathroom won’t help.
Simon

Hi Simon – found Permanent Style recently and enjoying it immensely. I was thinking of trying Eton shirts in the near future, but notice you don’t seem to have posted anything regarding them; I was wondering if you had any opinion on them?
Cheers,
Alex.

Hey Alex,
They make fairly decent shirts, but no better than most on the market in that range (eg TM Lewin) except perhaps the materials.
So if you like cloth, I’d go with something cheaper. Then spend some money getting them altered in the waist if that fit isn’t perfect.

I find that out of those cheaper shirt makers Charles Tyrwhit has by far the best cloth. Would you agree simon?

I don’t have enough experience of all of them to say, I’m afraid.
In my limited experience they are all pretty similar though, and depend more on what the customer picks (pattern, weight) rather than quality.

Surprised to hear you compare them to TM Lewin when their prices are much closer to T&A, but gives me something to think about!

Simon (or anyone) – do you know any good menswear shops in Rome? Just moved here and would be interested to know

Sartoria Ripense is quite nice, though like everything in Rome it is overpriced. Go for supper at giulio passami l’olio and you won’t regret it however.

Vittorio zenobi and battistoni are good

Sorry to hijack this post. But, in your opinion in terms of quality, what line from loro piana would match and/or supersede Holland & Sherry Pure Escoral cloth?

Hi Alexander,
Have you read my posts on the Italian and English mills? As a starting point, focusing on brands is a bad idea. Look at the material itself – most things (weight, weave, fineness, material) can be assessed objectively. The only thing that can’t is finish, and if you can’t feel the difference in that, you’re less likely to in a finished garment.
Simon

Thanks Simon, I will do some more research!

On a different subject, what are your thoughts on Creed’s new fragrances? I am particularly interested re your response to the CREED VETIVER GERANIUM. You have made positive comments about Vetiver. I use three of Creed’s at different times and am very pleased. However, the four other new products don’t biochemically blend with my skin. However, the Vetiver Geranium seem to work when I apply Vetiver first. I would appreciate your observations on this subject.

Thanks John. If I get a chance to try it I’ll let you know.

Out of interest, on what basis do you say the other don’t biochemically blend?

Each body’s senses are different and react to stimulants individually. An odor’s fragrance when applied to paper is usually different from that when sprayed on your body. In turn, it is usually a variant when applied to the person standing next to you. By the same token, your sense of smell may be markedly different than others. Ones body chemistry is a factor in all these equations. Life would truly be boring if we were all the same.

Thanks John. At some point I’d like to learn a bit more about actually how people’s bodies differ in this way. Obviously fragrances are different on different surfaces and materials, but those I speak to in the industry say most of the difference in the way people smell fragrances is down to associations, not physical attributes. Most of the time, you like smells because you associate them with different things.

There are clearly physical differences as well, but I have yet to see anything of substance on the subject.