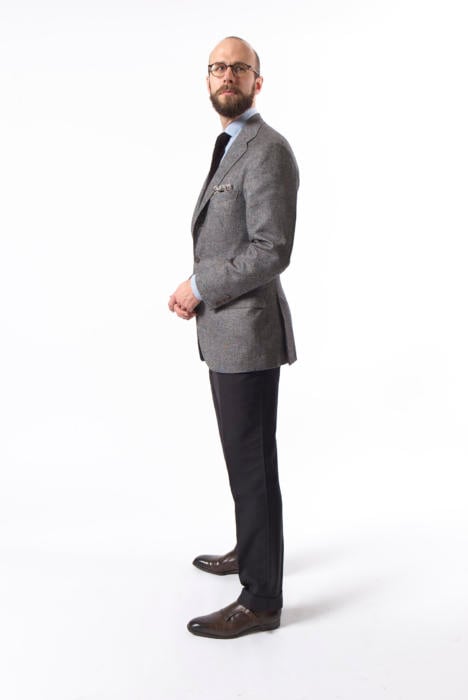 This is the third of the commissions I made with Spanish tailors earlier last year. It is a lightweight donegal jacket, from Calvo de Mora. It is probably the best of the three, and the most expensive. Funny how those things often go together.*

The Calvo de Mora make, like the other Spanish tailors, is light but heavier than the Neapolitans. There is a definite shoulder pad and structure to the chest, but neither approach the English level of canvas and padding.

The shoulders, as a result, are quite natural, with a tiny lift towards the end. The 3-roll-2 buttoning works quite fluidly, but with the top button entirely hidden in the roll. The lapel is wider than most contemporary styles (3.75 inches) but as with many of these elements, Calvo de Mora will make any width required. I deliberately asked for the house style for illustrative purposes.

One distinctive but subtle aspect of the Calvo jacket is the lack of skirt. Although the foreparts are quite open below the waist button, the sides sit close to the hips. In a shortish, casual jacket like this I like that style. A longer, flared skirt works better in more formal jackets (like my Huntsman**), or suits (like my Chittleborough & Morgan). 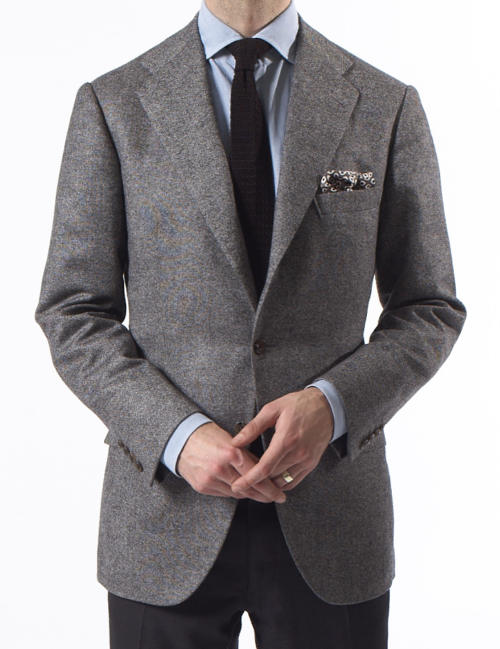 The finishing is very good – and it is this as well as little points of fit which elevate it above the other two Spanish tailors (Reillo and Langa). The back is beautifully smooth – which you can’t really see on the photo below, given I’m turning my head. That distorts the drape around the hips too.

Calvo suits start at €2500, which puts them the most expensive of this Spanish collection but I think great value for money. They have visited London once, and are making plans to do so again. Contact the team on their website for details.

It may well occur to readers that this jacket is very similar to the one I am having made at Ferdinando Caraceni. That is slightly lighter, cashmere and herringbone, but it is still pretty similar. The only explanation I have is that I realised last year I was definitely missing mid-grey jackets in my wardrobe (they’re just so versatile), and I didn’t know how this one would turn out. 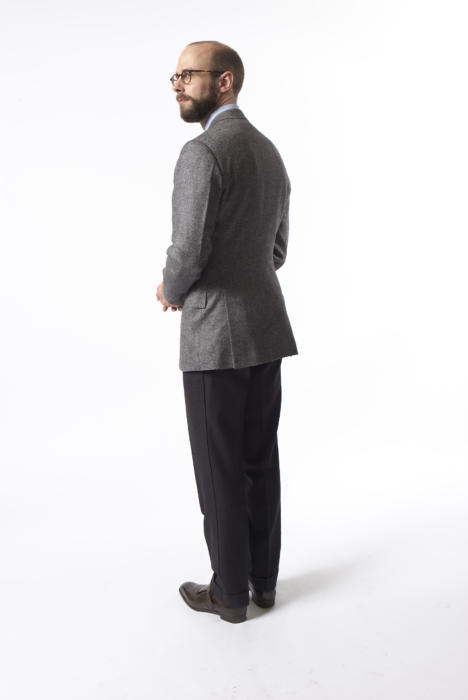 I also had a waistcoat (pale grey wool, with wool back) and dark-green cotton trousers made by Calvo, but more on those in another post.

In the rest of this outfit, by the way: blue linen shirt by Luca Avitabile; black knitted tie by Drake’s, brown/black/white silk handkerchief by Tom Ford; and (as with the pea coat shoot) trousers by Chittleborough & Morgan with Edward Green Top Drawer shoes.

*Or perhaps it is consistency of quality. Certainly, I have found on- an off-Savile Row that the more expensive houses deliver better quality (make and fit) more consistently.

**I finally had my Huntsman jacket fixed last week, after David Ward had failed to match the checks originally, either at the belt or collar. Pat Murphy managed to rectify both points, as well as improve the action back.

You can follow the discussion on Calvo de Mora donegal jacket by entering your email address in the box below. You will then receive an email every time a new comment is added. These will also contain a link to a page where you can stop the alerts, and remove all of your related data from the site.