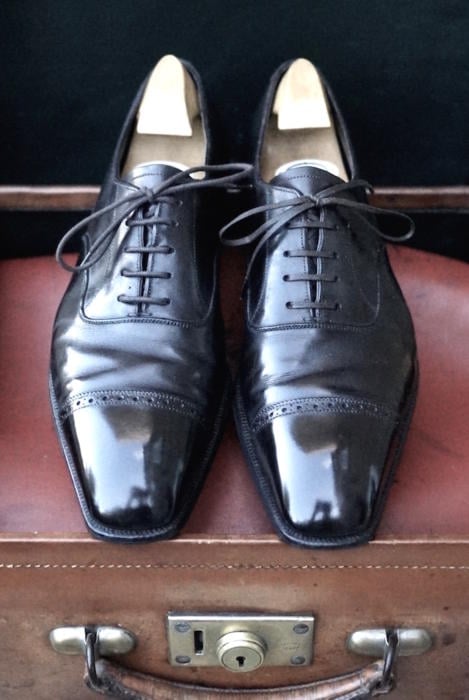 Laces are to a shoe what buttons are to a jacket. Often ignored, but with a disproportionate important effect on the overall look.

The most attractive buttons, for me, are always matte horn with a touch of contrast in their colouring. They produce the same sensation of pleasure as a finely sewn buttonhole or gently curving lapel.

Of course a suit worn with black shoes should not have brown buttons, but even then horn is better than corozo. Why so many Italians use corozo is beyond me.

Often, buttons are simply ignored in favour of more obvious style points, such as the width of the lapel. Yet change the buttons, and the whole look of the jacket changes.

Contrast in a button is one of the key things that separates a blazer from a suit jacket, and it is one of the reasons I find my Gieves travel jacket with interchangeable buttons so useful. 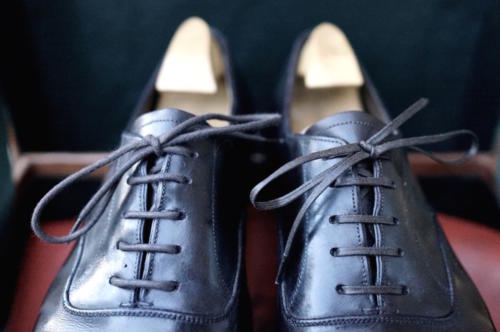 Laces are even more commonly ignored than buttons. For some brands they are part of their identity – the thin, lightly waxed laces used at Corthay for example (below) – but more often they are never given a second thought.

English shoemakers, as you might expect, are particularly bad in this regard. They pretty much all use the same round, thick lace, whether it’s on a formal black whole-cut or a country tan derby.

There’s nothing inherently wrong with this lace – seen above, left, on my bespoke brown Cleverleys. It is strong, reliable and not too slippery. But I would argue that it’s out of place on a more formal, dress shoe.

I therefore wear a flat, waxed lace (above, right) on any smart shoes, such as all my Cleverleys, Gaziano & Girlings and Stefano Bemers. In fact, any shoe that has a chance of being worn with a suit.

Justin Fitzpatrick does a nice set, as does Kirby Allison on The Hanger Project, who has a variety of thicknesses of lace.

Change your laces. Then look again at your jacket buttons, too. 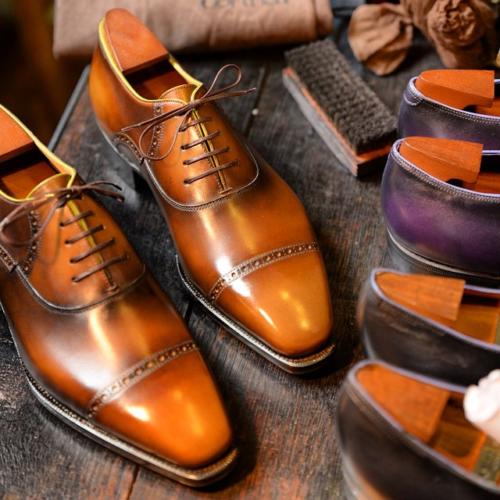 Simon, I always think that flat laces look a bit unusual on a formal shoe. I’m so used to seeing them on sports footwear! I agree that thin laces are more formal though.

Surprised that your lovely Cleverley’s are quite creased. Is that due to the trees being too small after the leather has stretched maybe? I can’t imagine you wouldn’t be using the trees!

Certainly using trees!
The leather has stretched a bit, but also due to the thin and lighter make

I think what’s maybe more annoying about shoe laces is that pretty much everyone makes them with plastic ends.

Interesting post Simon, I agree, after changing some of my own, that laces make a big difference. Mac has a point re. flat vs. round, I think colour and shade (lighter/darker) can also change the look of a shoe. On another issue back in your Bruce Boyer article he sported a vintage Gurkha bag/satchel. FYI Fortnum’s Gurkha concession has a ver similar item (vintage) for sale. It is upwards of £2K but for your readers who might consider collecting one I thought it worthy of mention (as I understand it the item, as with Bruces’, is no longer a current model).

Thanks Stephen, good point on colour.
The Gurkha concession is nice, yes, and thanks on the spot – is it the #191, the O’Rourke?

Simon,
Your timing with this post is incredible. Funnily enough, I was thinking of changing my flat waxed shoe laces on three pairs of my old Church’s royal collection shoes that I’ve now had for 10+ years that came with them. I totally agree with you that the flat laces definitely look better IMO. Why the change then….I am getting totally fed up when the flats start twisting in the eyelets. I usually have to remove the lace completely to straighten out and then re-lace. I’ve now come to the conclusion that it’s actually better to buy lots of spare pairs of flat laces then just replace them. Do you find the same problem with rounds?

Twisting is a pain, yes. Though I find if the lace is relatively wide then when I have them set through the eyelets correctly, they don’t twist that much going forward.

I believe so (though labelling wasn’t clear, I’m going by the visual similarity to the Ghurka O’Rourke) it has some small visual signs of use and age but generally is in good condition – it is displayed on the rear wall for those wishing to have a look. The weight (heavier than a usual satchel) testifies to the quality of the leather used. Coincidently one of Fortnum’s current windows is dedicated to the Gurkha Regiment.

I’ve been considering changing my laces on some of my shoes to flat laced for a while now, but I don’t know where to get good quality flat waxed laces. Do you know where in New York I could get them, or where I could order such laces in the US?

Also, is horn being better than corozo just an opinion of yours, or is there something that actually makes horn better? At least most Savile Row tailors don’t use plastic buttons anymore!

Mostly just opinion – I prefer the variation of horn within the button, and the more substantial variation between buttons. Corozo’s subtle swirls are too light for me, and they look too much like plastic. Both are nice natural materials though, and stronger than plastic

Kirby’s site is the best I know. He has a couple of options and I’m sure would give some feedback on thickness, wax, dressiness etc

I just received some flat laces from Kirby’s site for a pair of brown oxfords and a pair of black oxfords. They look considerably improved. Now I won’t feel so bad about wearing the black pair for black tie.

Hi Simon,
Eventually, you have decided to give some thought on shoe laces! Personally, I prefer thin waxed round laces – à la Corthay – for plain oxfords, and the flat ones for semi and full brogues.
John

It’s not just the style of lace that’s irritating when it comes to English shoemakers – I’ve also had bespoke shoes made with laces that are too short!

Great advice, Simon! On the search for added detail, but in a typically understated English manner, I purchased a pair of flat waxed navy shoelaces to wear with a plain black toe capped oxford shoe and I am very pleased with the result. The navy blue has the ability to look black in keeping with the shoe colour but at the same time provide a small element of detail. Conversely, I have added black laces to an oxblood shoe to provide an element of contrast but also “ground” the shoe colour as well. Good fun!

That might be ok, but keep them the same thickness as the sneaker laces – thin ones would look out of proportion