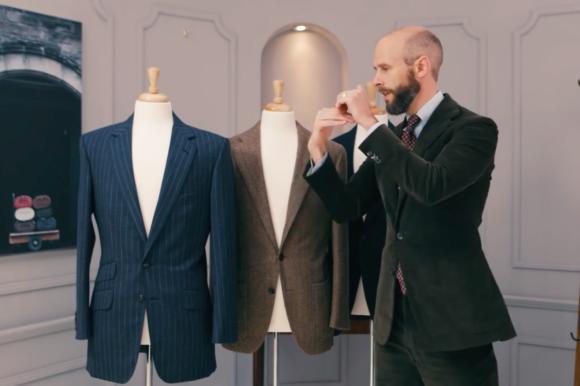 As soft Neapolitan jackets have become popular in the past 10 years or so, the phrase 'spalla camicia' has been more and more frequently used.

However if it means anything consistently, this Italian phrase for 'shirt sleeve' refers to a pretty narrow point in the way a sleeve and a shoulder of a jacket are put together.

Specifically, it is the construction that means the sleeve looks like it runs underneath the shoulder - as it does on a shirt.

It does not necessarily mean a small shoulder, a natural shoulder, or a sleeve with more gathering at the top.

In this video, the third in a series that started by looking at the aspects of cut in a jacket, and then specifically comparing English and Neapolitan jackets, I spell out these points in a Neapolitan jacket.

Other recent videos include:

In this video, I am wearing a green corduroy suit from Ettore de Cesare (cut rather closer than most I have), with a chambray button-down shirt from Luca Avitabile and a printed-silk Drake's tie.

The three jackets on show are from Kathryn Sargent, Eduardo de Simone and Dalcuore.

Many thanks to Fox Brothers, who made this mini-series possible. More on their new Fox Tweed bunch here. 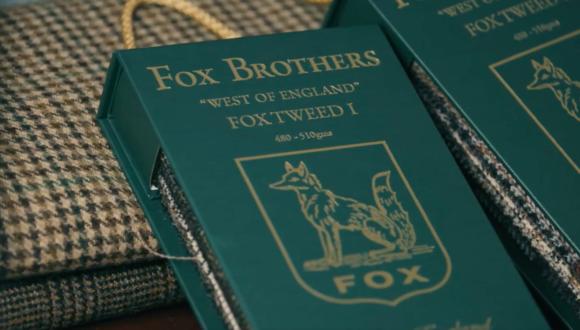 It appears in this series of videos that the cuff buttons on your shirt, at least on your right sleeve, are undone. It also seems that the right side collar leaf is not buttoned either.

Does this reflect an emerging styling point that we are yet to be advised about?

On the sleeve, no. This is just an old shirt and the sleeves are a little short, so unbuttoning them makes them a touch longer.

On the collar, I like to wear my buttondowns undone with ties sometimes, as I like the look of the point collar. Whether you like it or not gets into the whole sprezzatura debate, but it’s certainly not emerging!

Thanks Simon but only one of your collar leaves in unbuttoned, which is what prompted my question.

Actually they both are, it’s just that one of them is behaving itself and staying underneath the jacket collar, and the other is not.

Excellent video. Quintessential PS forensic analysis.
This series of videos comprise the most educational review of tailoring I’ve ever seen and are an absolute must for the thinking flaneur.
Personally I’d love you to do a style breakdown of your A&S Tobacco Corduroy DB suit. It’s one of the most beautiful items in your wardrobe and goes much unreported.

Nice explanation. I could never determine what a clear definition of spalla camicia should be, so I assumed it meant soft, rounded, natural shoulders. It never occurred to me that padding or shaping could be included in the overall description.

The diagram here explains everything:
https://stiff-collar.com/2011/05/16/cigarette-versus-camicia

Would Caliendo be your recommendation for a natural sloping shoulder, where the sleeve and shoulder have been pressed flat, and little shoulder padding? Any other tailors? I see Dalcuore as a tad more formal.

I wouldn’t focus too much on whether the seam is made that way with the two sides being pressed flat. It doesn’t make much difference to the overall style. Just ask any Neapolitan for a natural shoulder, and no shirring/ripples if that’s what you want.

I’d recommend both Caliendo and Ciardi, the former for a slightly closer more modern cut, the latter for something slightly more relaxed and traditional

Any thoughts on Korean tailors like BN Tailor and 8people who also do natural shoulders and a similar aesthetic? Looks a bit different than the Italians but I’m not sure why. The shoulders and body seem to fit a tad larger on the Korean tailoring

Not particularly, but just because my experience with BN Tailor wasn’t great, so hard to comment on accurately, and I haven’t tried any others