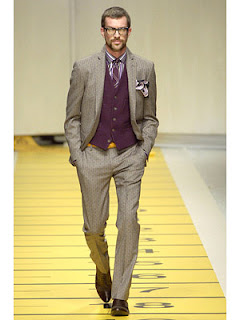 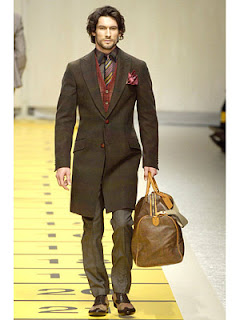 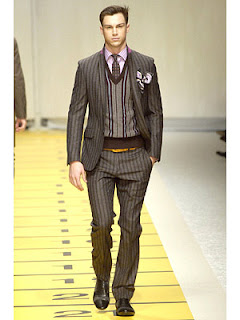 Following the last post on Italian house Etro, here is some pictorial analysis of my fascination.

As much as Etro’s originality and quality can inspire, it is often the catwalk combinations that galvanise me. Take the first image on the left – a pale grey suit with purple waistcoat and coordinating tie, shirt, handkerchief. Now, as a whole this is too much. 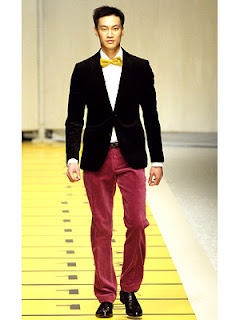 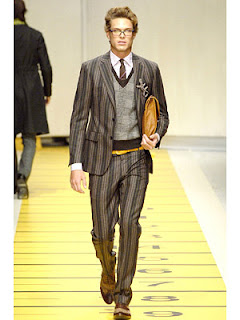 Some people might be able to get away with it – perhaps Italian eccentrics who happen to be heir to an automobile fortune. I can’t.

But like much that is thrown down the runway, it is not supposed to be copied. It is supposed to inspire. I have a sweater in a dark purple from Reiss. Up till now I have only worn it with navy suits or jackets. Perhaps I will 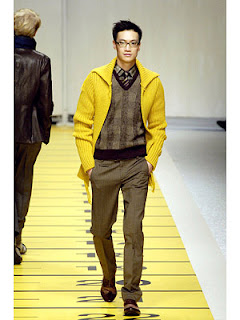 try it with a pale grey – even brown, which this suit seems to tend towards.

Equally, I would have thought the colour too dark to be worn with brown shoes; yet it works well here. And the twist of the yellow belt: perhaps too much, but it does remind me of the contrasting colours (one primary colour’s contrast is the mix of the other two – so, yellow’s is purple).

The handkerchief is too showy and I don’t like the pattern. I don’t particularly like the tie or shirt either, certainly not together. But a similar suit tone with a purple sweater, perhaps over a blue-and-white striped shirt? That could work. And yellow would be good as an accent, in a handkerchief or even a belt as here.

The image and its colours inspire in a way that is rare in menswear.

The second image on the left points out how well rusty reds work with brown, though I’d never go for that tie or shirt. The third is all about combinations of pattern. The suit, sweater, shirt, tie and handkerchief all have different patterns. But they work because the wide stripes of the sweater (and its strong outline) separate the suit and shirt/tie. Equally, the tie and shirt are a similar enough density of pattern to fit well together and to slip into the background. The colours (except for that yellow belt again) are not that extraordinary, but the patterns take it to another level. I wouldn’t wear it all, but it inspires.

The next image shows how well bright colours can go together if they are balanced (either the tie or the trousers on their own would stand out too much). The penultimate combination demonstrates balancing the strong pattern of a suit with plain, background colours elsewhere. And the yellow sweater in image number six just seems to work. Perhaps it’s the implied yellow in the green-tinge trousers and vest, I’m not sure.

During this same season, Fall 2007, Calvin Klein was displaying grey tonic suits, with the occasional bright yellow. Armani had quilted vests and collarless shirts, but was basically black and blue. Both seem not only dull but unsophisticated compared to the density of colour at an Etro show.

Have a flick through the previous few years’ Fall collections at Etro. Try and ignore 2007’s floppy yellow hat. The rest might just inspire you.

You can follow the discussion on An exercise in Etro by entering your email address in the box below. You will then receive an email every time a new comment is added. These will also contain a link to a page where you can stop the alerts, and remove all of your related data from the site.