There is almost no good journalism about men’s style these days. Outside of this and a few other websites, no-one produces objective, informed and above all critical writing about clothes, brands and products.

I flicked through a magazine called Man About Town last week (a recent launch in the high-end fashion sector, only on its second issue) and found 20 pages about the business of fashion. Should be interesting, except that it comprised several double-page spreads on brands including Dunhill and Church’s, merely describing their luscious interiors, history of craftsmanship and key pieces.

Not one critical or substantive word about what differentiated this business, about how it communicates its value for money, or about different times and designers have changed what it does. Nothing on what its detractors say about it; or on how much water those detractions hold.

Each piece read like an advert. It could be anything from reputable name brands to wholesale clothing. Which perhaps isn’t surprising, given that those companies advertise in the magazine. But this is what journalism is built on – the integrity that allows you to write fairly and objectively, if critically, about those that fund the magazine itself.

Another example this week piled ignorance onto paucity of journalism. The column Brummell in UK newspaper Financial News recommended a bespoke shirt service called Brass Bones, where you can get shirts made to your size by filling in a form online. Nothing wrong with that; it’s a good idea.

But there’s no journalism here. They haven’t tried the service or cast anything like a critical eye over it. There are several online shirt services that have been around for months, even years, yet they don’t get a mention – let alone a comparison. This service is presented as a one-off.

Such is the presentation of the piece, just like the examples in Man About Town, that it could be mistaken for an advert.

But the worst thing is ignorance about the product they are describing. Aside from a rather casual use of the word ‘bespoke’ (see previous post on Sartoriani), the boys at Brummell insightfully point out that the shirts have desirable details such as mother-of-pearl buttons, gussets and split yokes.

Mother-of-pearl is standard. If they didn’t have that you should send them back. The value of gussets is debateable. And split yokes rarely have their original use. 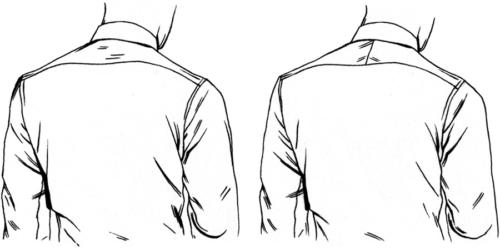 The value of a split yoke is that it enables the shirtmaker to cut the front panel of the shirt and the shoulders at a different angle in the weave. The front of a shirt will always be cut on the bias, to give it greater flexibility and fit. If the shoulder is also cut on the bias, both will be aligned and the shoulder seam, connecting the two, will be weaker, leading to stretching in the material and possible breaking. If the yoke is split, it can be cut at a different angle, reinforcing that seam.

But today the split yoke is rarely cut in this way, and the reason people give for its value is either aesthetics (a nice matching of stripes) or measurements (the tailor has measured each side differently).

I’d bet a decent sum of money the writers of that piece just copied the list from a Brass Bones press release, with little thought for what it meant. Oh well.

I disagree with your comment about split yokes – for a start it allows pattern matching up to the split seam rather than ugly disjoints at the point where the arms meet the shoulders.

Hi – I agree this can be nice on stripes and other patterns, and if people want to go for that I think it works well.

My point was more that this is rarely the reason people go for a split yoke and there is still some mythology about it denoting good workmanship.

Thanks for your comments

Agree completely with your comments on the state of men’s fashion journalism. Nothing irritates me more than to be reading pseudo articles in magazines about men’s fashion that are little more than an advertorial taken from copy provided by the company. If I want this type of insights I can simply visit the company’s website. What I like to read is something with insight that discusses an issue from various perspectives, offers me new things to think about, challenges traditional ideas and makes me reconsider my own views on the matter. That is why reading this site is one of the joys of my busy days. Keep up the great work.

you hit the nail on the head. journalists should be free to write about a brand the way they see it that is, both the good and bad aspects. afterall accuracy is a journalist’s calling card.

There isn't going to be a last for every foot shape unfortunately... As far as I know there's no Alden last that specifically fits that shape, but a reader may chip in if I've missed one

Amazing, thanks Alex, great to hear

The olive PS Trench is back