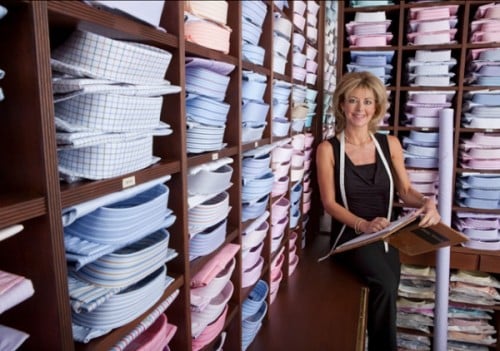 Tradition has it that when British men came back from the war they only had two ties they felt they could legitimately wear – that of the military regiment they belonged to and that of the club they were a member of. Both were relatively plain, either a series of crests on a dark ground or a club stripe in two colours.

Eager to partake in the new openness in men’s clothing, these men wanted to dress up their ties. So they turned to more colourful shirts. Jermyn Street sprang up to service them.

This is the reason that, to this day, a pink shirt and most forms of stripe are perfectly acceptable as business attire in London. Even lawyers who rarely stray from a navy suit, black shoes and black socks (sad but true) will happily wear a pink or striped shirt and not consider themselves any less formal.

Not so the Americans, for whom the white shirt is the business staple, blue or stripes a little casual, and pink ever so slightly effeminate. Loosened from the formalities of London’s business regime, Americans are more likely to wear patterned suits or brown shoes (particularly in Boston). But not pink shirts.

Which is a shame, as pink shirts suit many people. Smarter and cleaner than blue or a stripe, they add a little frisson of colour while remaining very formal.

I was reminded of this the other day by a colleague who was wearing a pink shirt for the first time. In fact, he admitted it was probably the first time in his life he had ever worn anything pink.

Which was a particular shame, because pink suited him. Anyone with slightly ruddier features or more than average pink in their skin will suit a pink shirt, perhaps more than any other colour.

The great Alan Flusser tells us that a blue shirt goes with more people’s skin tones than white. And he’s right. While white may be cleaner and smarter, it tends to wash out people with paler skin, leaving them looking even whiter than they are. It looks best on high-contrast complexions – broadly speaking, those with darker skin.

Blue, on the other hand, is more forgiving on all types of skin tone. That is one of the reasons it is universally the most popular colour for casual shirts.

Pink, logically, tends to suit those with a little red or pink in their skin. Contrary to what you might expect, it will look more manly the paler the colour, as Hardy Amies informs us. Nothing will look worse than a strong, deep pink.

I have a white complexion, dark hair, and green eyes. I look best in white only when I’m tanned, but always good in pink or blue.

Great point! I threw on a pink shirt by chance ( borrowed from a colleague by chance) and I got so many compliments. Not on the shirt, but how good I looked. Three days with no sleep working like an animal and the pink shirt made made look great. It was a very pale shade of pink.

I now had 5 different pink shirts made. Nobody really notices that you are wearing a pink shirt. You just look good.

wow, guess that proof eading is imptant… sorry about the typos.

Good point on the pink shirt. I think a pale shade can really add something to add outfit, and to how you look, without standing out too much.

would love to read more from you on the “Personal color strategy”, as Alan Flusser calls it in Dressing The Man.
As my complexion is fair skin crowned with golden hair, not only am I progressively abandoning the white shirt in favour of light blue and white/blue striped shirts, but I always try to wear at least one item that reflects my gold-toned complexion.
Well, easier said than done … some pictures of appropriate outfit (suit, shirt, tie) to flatter my complexion would be a great help (I could find only one example in AF’s Dressing The Man).

I HAVE A REDDISH COMPLEXION SO I OFTEN WEAR LIGHT PINK SHIRTS. HOWEVER MY GIRLFRIEND GAVE ME A BRIGHT PINK SHIRT FOR CHRISTMAS AND I AM UNSURE AS TO WHETHER I SHOULD WEAR THIS TO THE OFFICE – ANY HELP WOULD BE APPRECIATED

There’s nothing wrong with a solid pink shirt, but I would caution against anything bright. If you’re not sure if yours is too bright, go into an outfitter like Brooks or J Press and compare. They have the shades right.

i do not agree with your comments to andy about him getting shirted. my bright pink shirt is one of my favourite work shirts and people in the office seem to like it. some days i wear white or grey but at other times there is nothing wrong with a bit of colour. go for it andy, i’m sure it will become one of your favourite shirts and it will also please your girlfriend who purchased the shirt

To be honest I’m not sure Stanley. I haven’t seen a wide variety of Asian skin tones wearing pink. Though I can imagine how it might be difficult

Simon I am looking to buy a couple of good – quality ready to wear (easily accessible via their website) shirts. Turnbull and Asser and Budd are now too dear for my budget. I am looking at Emma Willis and Hilditch and Key. I’ve bought some H & K years ago and the fabric and overall quality was very near T & A. My research online indicates H & K are now made in Italy. Any insight in to the quality of their ready to wear shirts these days? How do they compare to Emma Willis’ ? Are there any other brands to consider at this price point?
Thank You

I’m afraid I haven’t looked at those brands for a while. I tend to buy softer collared, Italian makes. Like Anglo-Italian or of course the PS ones