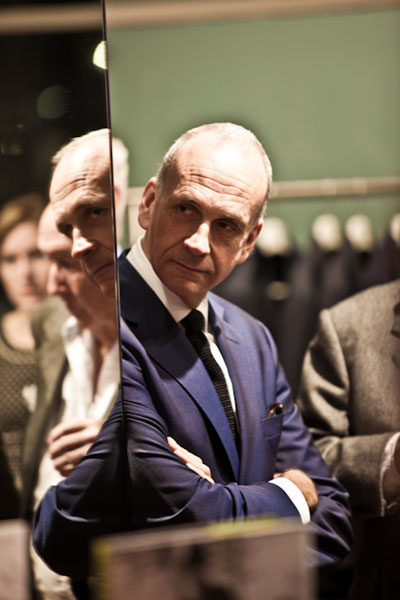 At the press launch of Sharp Suits by Eric Musgrave a few week ago (pictures and report here) there was quite a variety of menswear on display.

Eric himself was wearing a splendid windowpane-check grey suit and gold tie; host Richard James wore a characteristic strong blue suit, white shirt and knitted black tie; and yours truly went for a navy double-breasted with a tie in a rather fetching shade of rust. But there was also Ben Cobb, editor of Man About Town, in a white leather jacket, vest and (of course) moustache, as well as a gentleman in a rubber jacket and all sorts of people wearing drainpipe trousers.

There are few events today at which one could say there is an expectation as to what should be worn. Fewer still where a real sense of propriety dominates. Various concerts, races and royal events are about it. But a book launch on Savile Row brings some expectations – not to dress to a code, perhaps, but to make a certain effort. This, clearly, everyone had done. And while not necessarily endorsing the rubber jacket, I think the event was better for this emphasis on personal style rather than social correctness.

For a pleasant few minutes I was chatting to Michael Whitby-Grubb of Penrose. He was wearing a checked three-piece suit in yellow and tan. His tie was a rather luminescent silver from Penrose itself (apparently the extra shine is due to not letting the silkweavers bleach the silk before they colour it). And he had on chunky brown brogues.

He looked pretty damn good. And it occurred to me that were this a hundred years earlier, an event of this sort would have seen all men in black tie. Perhaps some variation in jacket style, waistcoat or accessories, but essentially all men wearing the same thing. There is a certain ritualistic beauty in that; definitely an elegance that modern society lacks. But it leaves little room for inspiration and personal style.

It seems to me that when we bemoan a lack of smart dress, often we are lamenting men’s laziness and a lack of interest in how they look. That is far more depressing than taste you disagree with.

I wish there were more black-tie events, I do. I wish I had to own a morning suit, and wear that frequently. But I’m glad that Michael can wear what is effectively a country suit to an event of that type, and pay attention to it, dress it up and accessorise it as a result. It inspires me.

Simon, have you ever condiser turning your blog into a book? You have lots of cool stuff here.

Thank you for your comment. Yes, I have considered this and several people have mentioned it. It is however a project that will have to be postponed for the moment.

Any suggestions on what original angle the book could take would also be appreciated. The one that comes up a lot is use of colour, harmony and commissioning bespoke.

I would wager that for most men where I live, San Francisco, they understand that there are suits, suits for funerals and black tie, and that the idea of distinctions between city suits, country suits, “casual” suits, work suits and so on would just be beyond their comprehension. for most of us a suit is a suit is a suit. I am just starting to learn about these distinctions now, at age 47, having grown up in an academic household where there were no suits, only sport coats and never a tie.