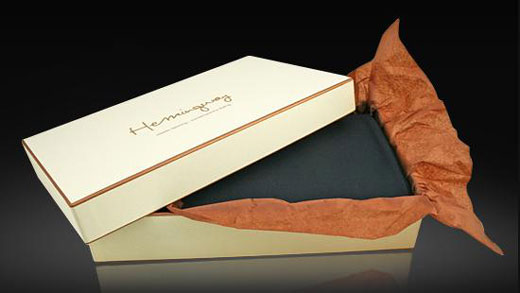 Having met Toby Luper of Hemingway Tailors, I was invited recently to try his bespoke service. Toby is rather cynical about the number of fittings Savile Row tailors insist on, and bet me he could get the fit right in one (forward) fitting.

As I mentioned in a recent post, I was impressed by the attention to detail Toby showed in analysing my body shape. That impression continued with the fitting this week.

The trousers were a good fit across the waist and shaped beautifully down my lower back, falling in one nice straight line from my bum to the floor. I have a rather pronounced seat, despite being slim, and this can be a hard thing for tailors to get right.

The seat itself was a little tight, as shown by the trouser pockets gaping about an inch. But that was the only alteration needed to the trousers – everything else was perfect.

On the jacket, Toby had discussed previously throwing the balance a little further back, so that there was room to cover by prominent shoulder blades and fall cleanly over my bum. The suit I had been wearing at our first session (an old one of Edward Tam’s) hollowed out a little between the blades and in the small of my back, meaning that the skirt kicked out.

After he had raised the back by around an inch and a half all the way across – from one armhole to the other – he did achieve that clean finish on the back.

There was no sleeve roll at this stage, which meant the sleevehead folded in under the shoulder pad. While this is a little off-putting, the finished effect could be seen by tautening the sleeve. The shoulders were also taken in an eighth of an inch.

The right sleeve appeared a little shorter than the left, so it was lengthened an inch and the left sleeve just half an inch. The waist fit perfectly.

Elsewhere the fronts were fine except for one small detail – it had been made up as a single breasted when I asked for a double. I say small detail because while this will necessitate replacing the fronts entirely, I have confidence in Toby’s attention to figuration and I’m sure the final product will be a very good fit.

It does mean we will require a second fitting; so Toby lost that bet, though on different grounds to those we were really exploring. The truth of Toby’s skill will be seen when the suit is complete and has been worn several times.

In the meantime his passion for hang and drape is undoubted. I’ve tried a few visiting tailors over the years and too many saw the fitting as a time for me to tell them what I disliked, rather than for them to analyse the minutiae of fit.

For those that are interested, I had a nice discussion with Holland & Sherry about their upcoming remnant sale – big reductions on a range of cloths, April 22-23 10am-4pm in the fitting rooms at 9/10 Savile Row. All welcome.

You can follow the discussion on First fitting with Toby Luper by entering your email address in the box below. You will then receive an email every time a new comment is added. These will also contain a link to a page where you can stop the alerts, and remove all of your related data from the site.

When I first started ordering bespoke I didn't know any better and got matching linings. I suspect the choice can depend on whether one is ordering a suit or a sports jacket or an overcoat. I get mainly jackets, and I like to get a…

I found the loafer most versatile of all, myself. The others are still very versatile, just for different levels of formality. An oxford in suede is not good with jeans, but covers a range of tailoring. A derby is good with jeans and more casual…

Beautiful! I really liked it. Thanks for the information

Some thoughts as a current grad student: Unless I am presenting a paper or attending a larger conference, I find a sports jacket a bit much. But a nice jumper or cardigan (or overshirt or shirt-jacket in the summer), a tailored trouser, and a well-fitting…

Casual chic: The inspiration of vintage leisure and sportswear