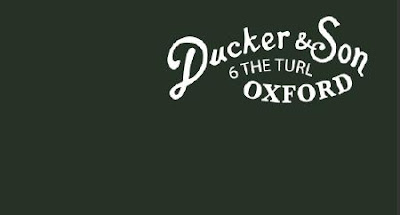 Apparently I used to walk past Ducker & Son almost every day for three years. But I never noticed. I wasn’t exactly into clothes at Oxford – baggy Gap jeans and an untucked shirt were the best I rustle up. A bespoke shoe maker like Ducker’s would have made little impression.
But on the recommendation of someone on this blog, I made sure to look in when I was up in Oxford last week on business. Bob and Isabel were both friendly and warm, and talked me through the shop’s variety of footwear, which is probably best described as diverse and unassuming.

Ducker’s sells shoes costing everything from £80 to £3000. It caters for the cash-poor student trying to buy a decent pair of brogues, or boat shoes to kick around in, as well as the bespoke enthusiast looking to unleash his tastes on exotic hides.

Bespoke starts at £1500, which is pretty good compared to London and only an hour away. While measurements and all fittings are done by Bob, the lasts are made by Springline to his specifications. So some difference from the London shoemakers there. Closing is done by a series of outworkers around the county and all the making is done by friends using spare space in Northampton factories. Though entirely handmade, the production is therefore a little scattered.

Although the turnover of bespoke shoes is not large, its clients have included JRR Tolkien, Evelyn Waugh and various Maharajas. More recently, Eddie Jordan and Jeremy Clarkson were added to the list. And demand is still consistent, pushing the delivery time for bespoke orders out to around 36 weeks.

The stock of ready-made shoes lines the walls of the shop on Turl Street. But it is still not that extensive and made-to-order is heavily emphasised. Depending on the style and timing with the producers in Northampton, made-to-order shoes can be delivered in anything from 4 to 14 weeks. The ability to thus pick your last, leather and sole is highlighted.

That’s the diversity dealt with. The style of the shoes, a last that Bob says he personally commissioned and designed, is unassuming. No Gaziano-style sculpting here. Just nice brogues and Oxfords with smooth, clean lines.

Ducker & Son was founded in 1898 and has been in the same family ever since. When Mr Ducker arrived in Oxford, he was one of 20 shoemakers in the city. Now there’s just one. Let’s hope it stays around, for more sartorial students than I to discover. 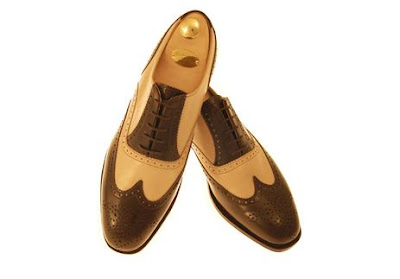 It is interesting for me that you were not aware of any interest in clothes until after graduation. Do you think that this suggests that you are not a ‘natural’ – more of a determined and plodding tortoise than the scatty hare?

Dear Simon , as usual your comments and reports are great !! Knowing something about shoes myself i have started now my own blog “shoesouliers.blogspot.com” It’s a long process I guess but I simply love shoes too much …..
The blog is not so detailed and perfect than yours of course but it should be a forum for open discussion about the more “soulsearching”aspect of mens shoes like “why do men buy like this style in particular ..” why do they choose this syle? If i can give some guidance that would be great. So start posting if you wish..
Best
Andreas
Andreas

very helpful note, I have just placed a bid for D & son, and believe me I am a die hard shoe fan and it was first time I hear the name.
the tassel loafer I am bidding for looks very much any other English made shoe

I bought a pair of loafers here 6 months ago, in a rather daring shade of claret. I don’t wear them out and about too often, being so bold, but I am very, very fond of them.

My grandfather would bring his shoe lasts with him whenever he visited Oxford (which was only every 5 years or so). Duckers was the only place he trusted to make the Derbys he wore every day to work, right into his 80’s.

A great, great shoemaker, and in years to come I hope to go back and buy many more pairs there.

Please be warned, Duckers, no matter how appealing the shop window, DO NOT make shoes. This stopped 40-50 years ago. Shoes are made to their specs by Grensons. You can compare Grensons Oxfords with Duckers. The bespoke shoes are simply farmed out to contractors/3rd parties. You can even find Duckers on ebay (straight from the Grenson factory). I was told this by the previous owners when I was a student 30 years ago. If you dont believe this, go to Duckers and ask them where exactly their factory is and how many staff they have!

I don’t think there was any suggestion that Ducker’s makes its own ready-to-wear shoes. They are made at Grenson. And as I detailed, only the measurement and fitting for bespoke shoes is done by Bob.

My father and uncle were co directors of the business before retirement, handing over the reigns to Bob some years ago. I can tell you having spent pretty much the majority of my summer holidays as a child watching them work in the workshop, my brother and I learning to sew repair welts to the upper(a very time consuming and patience testing process when done by hand) they do/did the bespoke work themselves and still do much of the repair work by hand or at least they did.

Lots of fond memories of that little shop, very pleased to see they are still going.

They certainly make some great shoes. Their customer service however, is atrocious (and has been on the several occasions I have come in and bought shoes). Perhaps it is because of my own baggy Gap jeans and an untucked shirt – but for heavens sake – they sell shoes! Is it really wise for them to look down on a young Oxford Don and more importantly – a past customer and potential future customer?

Sounds like you would be more at home at Clarks with Gap jeans and an untucked shirt!

I agree with many of the comments posted here, I am now on my second pair of shoes purchased from Duckers and the quality and fit is superb. The customer service is fair, not overly friendly but satisfactory.

I have been wearing Duckers shoes since I started work 29 years ago. Over these years I have bought, and still wear, six different pairs of Duckers. The older shoes still polish up to look like horse chestnuts straight out of their shell.
While I managed to get my shoes repaired before the shop closed, I will eventually need to get them re-soled/healed again.
Does anyone have any suggestions where I can get repairs to my treasured Duckers shoes.

I understand that Ducker & Son has now closed, which means the last shoemaker in Oxford has gone. This is very sad.

Anyone know where I might get my lovely Ducker @ Son shoes re soled now that Bob has retired? I live in Oxford, but willing to go elsewhere to find someone who has the same standards as Bob.

Ducker & Co
They sold me a pair of boots, at the time I said they seemed too small, had them fitted with a non slip sole whilst in Oxford. When I got home I tried them on again and ouch they were a good half size too small.
Next time I was in the covered market trying on shoes I mentioned this and I had the impression this was not the first time they’d heard it. Still sorry to hear they’ve gone.