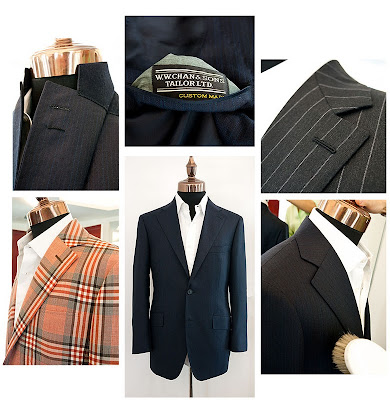 There was a generation of tailors in known as the ‘red gang’ early in the twentieth century that fused techniques learnt from Russian, British, Japanese and Chinese tailors. They formed their own approach and their own training system, putting all new recruits through a three-year programme (similar to many Savile Row houses) before allowing them to cut trousers and, later in their career, move on to jackets.

Houses like WW Chan and Baroman are descendants of these tailors. Mr Chan himself took apprenticeship in a tailoring shop at the age of 14 (in 1936) before enrolling in a tailoring school and learning the ‘red gang’ trade. The fashion museum in , which features a long history of the gang, also holds a few of Chan’s artefacts, including his ring.

WW Chan founded the shop in in 1948, and handed the business down to his son Peter. Today there is just a handful of these Shanghainese tailors in , who have resisted the temptation of mechanised production and high turnover. Chan’s cutting and tailoring, for example, is still all done on site. That’s a stretch beyond even most Savile Row tailors today (though it does help that Chan owns the premises).

Interesting to know how a different group of tailors arrived at similar practices on the other side of the world. And if anyone reads Chinese, they can peruse the museum.

For those that are interested, Patrick Chu, head cutter at WW Chan, will be over in from May 13th to 20th. Suits are usually around $1500 to $2000 and, the way Chan works, have the option of a basted fitting the next time Patrick is in the country (usually every six months). If you can make it to – or the where the team visits every three months – the process can be quicker.

The current Chan site, while the full one is being updated: wwchan.com/special/

Are you attending a fitting? I opted for some shirts during Patrick’s last visit and I’m rather pleased with the first one received thus far

Chan has deservedly accredited strong cache on the menswear fora; I’m recommending them to my bespoke-minded fellows and they’ve been exquisitely outfitting a good friend of mine for some time – his suits make definitive impressions without the obnoxiousness of gaudy detailing

Here’s the link to the page on the Ningbo fashion museum site which explains why old-school Ningbo/Shanghai tailors were called “Red Gang”. Ningbo is a port city an hour or so south of Shanghai, from which a lot of Shanghai’s tradesmen originated in the Roaring Twenties (my wife’s grandfather included). According to the site, tailors were called “Red Gang” because they made suitings for those “Red-Haired Foreigners”. Even today, some Chinese-speaking places still call Wsterners by the colloquial name of “Red Hair” (in Singaporean-Hokkien dialect, it’s pronounced “Ang Mo”). Thanks for the link and the historical tidbit! I’m Shanghainese-Hong Kong and a WW Chan customer, but I’ve never heard this term until today! 🙂