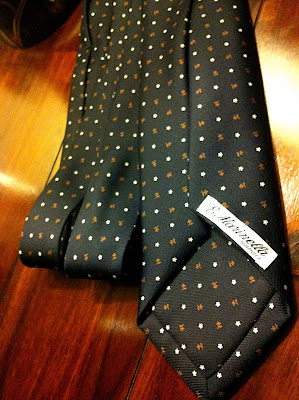 The making of my Marinella tie hasn’t quite gone according to plan. When I received it – admittedly very quickly, after little more than a week – the length was correct but it was the standard width at the bottleneck. As I explained in the previous post, I wanted the neck wider in order to create a longer knot.

This may have been partially my fault, as I changed the order – to 9cm at the tip rather than 10cm – while talking to shop manager Dani on the plane back from Naples. Nonetheless, there were only three things to remember (length, width at tip, width at neck).

The tie went back and was remade, again in just over a week. Impressive, particularly given the rush to get things done before Italy closes down for August.

The neck has been corrected, though I’m not sure entirely by the half centimetre I requested. If not, the difference is marginal – millimetres that can easily be added or subtracted depending on how you press the tie when measuring.

And the tie itself – texture, weight, colour and knotting – is lovely. The construction I would call a 10-fold, given that there are that many of folds in the silk and that system corresponds to a three-fold conventional tie. But then everyone calls something different a seven-fold. Kiton’s are five-fold, as are the multifolds from Hermès, while Bulgari is six-fold.

A lovely cloth, and a great reflection of local, traditional tie-making in Naples. Even if it took a while to get there.

Note: The London store is now stocking vintage Marinella ties, going back to the forties and fifties, made then but unworn since. Each has the date hand-written on the back. Three folds, around £130. 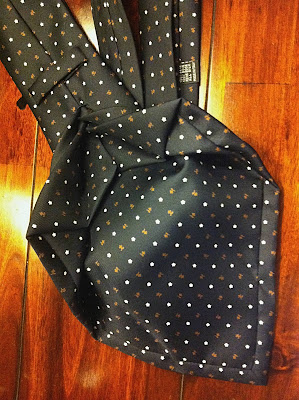 You can follow the discussion on Naples, E Marinella, made to measure tie result by entering your email address in the box below. You will then receive an email every time a new comment is added. These will also contain a link to a page where you can stop the alerts, and remove all of your related data from the site.