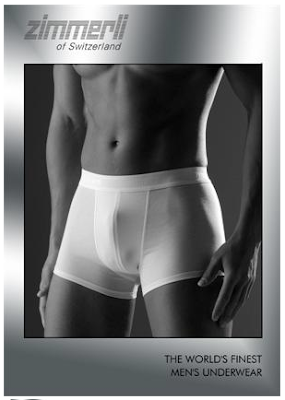 Several months ago I undertook a project on Permanent Style to find the best underwear in the world, in terms of both quality and style. I interviewed Zimmerli, The White Briefs, Sunspel and Hanro, and tested out their product (wearing and washing for at least 10 days).
The best underwear was undoubtedly from Zimmerli, the Switzerland-based company that is also the most expensive. Some of their styling may be a little old-fashioned, but if you find a style you like then their make is great and their materials unmatched.
I also visited Zimmerli’s facilities to see the production first hand, in order to include them in my forthcoming book: The Finest Menswear in the World.
The project was not in abstract. Having decided that Zimmerli was the best in the world, and tried out five different styles, I threw out every old tatty pair of pants I owned and replaced them with Zimmerli. More specifically, the Pureness Closed-Fly Pant in white.
That may be more than you wanted to know about my nether garments.
But for those that are interested in the technical details, the underwear is made from a natural beech-tree cellulose called micro modal – very similar to cotton but made from reconstituted cellulose fibres. It’s more environmentally friendly than cotton, absorbs moisture faster and is finer than that or silk.
But those were not the reasons I chose micro modal. I chose it because it’s an essentially natural fibre that has intrinsic stretch. Add a small amount of Lycra (5%) and it is highly comfortable and more breathable than a more synthetic stretch fabric. Several people I interviewed during the underwear project told me of the important of 100% cotton for breathability, but frankly I haven’t found that to be the case.
I bought my stock from A Suitable Wardrobe, Will Boehlke’s rapidly expanding online haberdashery. Over the past few years the ASW store has become the biggest source for the best formal accessories and clothing in the world, particularly for my favourites like Bresciani socks. There’s an early sale on, too.
– NOTE: See comments for some negative experiences on the wear on white pairs –

Nice find. However, I have a theory that the ribbed hemming of my trunk boxers may be contributing to the much dreaded piling of my suit trousers. Controlled experiments are still in progress!

What about american apparel? Especially the organic ones

As with almost everything I’ve owned from American Apparel, I find the longevity isn’t there

There is probably the worlds best men’s underwear right near where you live Simon – Sunspel
Unlike other brands, like the one you’ve reviewed, you don’t need a body like a 30 year old buff body builder to feel good in Sunspel.
If you want something for special occaison inc that romantic dinner (or after dinner) with your wife / partner – drakes men’s boxers are a cut above anything else I’ve worn in my 50+ years
Love the column

I reviewed Sunspel, as mentioned in the column above, trying three different models. I’m afraid they weren’t as good, but they won the award for best value

I’ve been holding my breath for this post for quite some time, thank you for finally posting it! Could you comment on which ones that ranked second and third?

I was thoroughly convinced that good quality cotton was the way to go for socks, until I tried socks made out of good quality wool. Did you consider or test any wool garments?

I do have quite a lot of experience with merino wool, through rapha shorts and underwear. But it is not versatile enough for every day

Would be curious to get your thoughts om bamboo as a material, on a whim brought some socks made from bamboo mix and they are the comfiest i have owned, so far holding up well. I like the idea that it is a more environmentally friendly option than cotton but don’t know enough about the manufacturing and processing of the bamboo to fabric to be able to vouch for that

Bamboo is great, particularly for underwear and socks as it is so light and breathable. Not quite as hard wearing, but very comfortable

A few monhs ago I read your review about underwear pants and bought myself your recommended underwear from Zimmerli the pure comfort with modal fabric. After washing it a few times the outside is pilling very heavily. I wash it at 40 degrees and hang dry. The inside of the pants is much softer and shows less pilling. Normally I wear jeans so could it be the contact with jeans that is starting these shorts to pill or is it my washing? Do you experience the same kind of pilling?

Hi,
Interesting that you’ve experienced this. I have too, but only on a few pairs and only on white, not black. I asked Zimmerli why this might be, and their only advice was to wash them inside out and avoid high heats.
Simon

even more scary my black ones are also still fine.

what about revising your recommendation in the article, because not everybody read the comments section?

Hi Simon, that can be easily avoided when you use a net laundry bag, which are inexpensive, opposite to the undies.

Thanks Phil. I have one I use for knitwear, hadn’t thought of it to avoid pilling on underwear

Is there a website you’d recommend using to buy the Zimmerlis today? I’ve tried Zimmerli’s own website, which is surprisingly glitchy and not user friendly for a premium brand, and Harrods, which seems to be constantly low on stock, but can’t find any others.

I’ve seen them on Amazon.