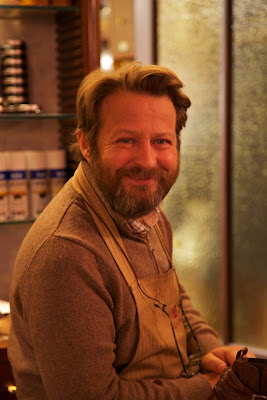 Stefano Bemer, a great man and shoemaker, died yesterday.
I had the privilege of knowing and working with Stefano earlier this year. He was, as is probably obvious from the tributes that have followed his death, a wonderfully warm and welcoming man. He was particularly known for his honesty, his dedication to the craft and his inspiration in training  young shoemakers. When I visited in January he was in the last stages of training three recruits, and among his graduates are Saskia Wittmer in Florence, Norman Vilalta in Mallorca, The Shoe Snob’s Justin Fitzpatrick and most famously actor Daniel Day-Lewis.
Stefano had struggled with kidney problems for several years and had been on dialysis for months. When I saw him in January he was weak but still his effervescent self. It is sad to know that the world will be denied his charm and his beautiful creations.
The atelier will continue, with his brother – who had been looking after the ready-to-wear and made-to-measure lines – presumably taking a larger role. Although small, it produced hand-sewn footwear for other brands as well as under the Bemer label, and of course bespoke. Let’s hope some of his magic lives on.

What a wonderful photograph of one of the greatest, not only in his craft, but also how he conducts himself and his passion in ensuring that the tradition of cordwaining lives on!

May his legacy be seen in the works of his disciples!

A Salute to this Great Artisan;May he rest in peace…