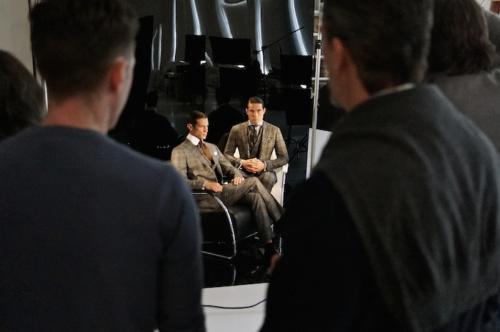 One of the most enjoyable stops last week in New York was the photo shoot for next season’s Phineas Cole collection. Since its launch, Phineas Cole has successfully brought both youth and verve to Paul Stuart, under the directorship of Ralph Auriemma. So it’s great now to see Ralph take over the rest of the Paul Stuart line.

Together with plans for both physical and digital expansion, it bodes well for one of my favourite stores in the world. Paul Stuart has always had quality and taste, but its style has occasionally become aged and unimaginative. Things look like becoming bigger and better.

Anyone who has been to a photo shoot can never look at a lookbook in the same way again. It takes so long to get every shot right, even with all of the preparation from Ralph, Tom and the team. A simple change of position for one of the models – which could never have been imagined in advance – requires the photographer and his assistants to shift three lights, two shades and one stand. For a few shots, a couple of shakes of the head, and one more bright idea.

Good lookbooks and fashion shoots, when they go well, are works of art. To be cut out and kept. (Or indeed scanned and shared.)

Recently discovered Paul Stuart for myself so nice to see you covering them here as I’d not uncovered them on your site before. Sad to see they’re not available in the UK but the pictures will give my tailor something to work with.

Is it unfair to think of Phineas Cole as a poor man’s Purple Label? Although being such is not necessarily a bad thing…

Not sure that helps – the quality level is slightly different and the aesthetic more different. It’s more a change on style rather than quality on the rest of PS too. That help?

Could you elaborate actually? Phineas Cole reminds me of certain RLPL shows from roughly 2005-2008, but with a stronger emphasis on waistcoats, peak lapels, and an even more fitted look. Certainly one expects quality to be higher, since the cost for RLPL is more than double PS.

But looking at the photo shoot above, even the models hair is reminiscent of Ralph. Again, to imitate anything from Ralph Lauren is not a bad thing, but I feel that the similarities are striking whilst simultaneously jarring. Still, I’m a big fan of the overall aesthetic of both, and I think it sad that such men do not prowl the streets of the real world. Unless, that is, things have changed since I’ve last been in London or NYC. I have my doubts on that one!

I’m afraid they don’t Jerrell, no. The point re RL I think you made yourself – at some point most formal menswear bears a striking similarity to something RL has done.