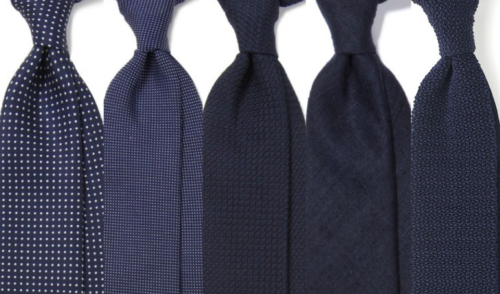 A few weeks a reader asked for a post on what makes a tie more or less formal, smart or not.

It’s a very relevant question. Few men today wear ties, but when they do, they rarely want them to be as smart as the traditional foulards and Macclesfield weaves. Understanding how to dress down a tie (or, for the right occasion, up) is important.

The elements that make a tie more or less formal are very similar to those that affect suits, shoes or handkerchiefs. Brighter colours and bolder patterns are less smart; smooth texture and dark tones are more.

The four dominant elements here are: tone, colour, texture and pattern. Of these, texture is often the most important in a tie – partly because it is the most subtle and easy to miss.

In the image at the top of this post, I have shown five ties that have greater texture from left to right. They are: printed silk, woven silk, grenadine, tussah and knitted silk.

All things being even, they would therefore go from more to less formal, left to right.

The first two have a pattern, however, which sets them apart, and are slightly different shades of blue. The printed silk (left) has a slightly larger pattern (less formal) but is a darker shade of blue (more formal).

The difference between these two is tiny, but the important thing to realise is that all three things – texture, pattern, colour – make a difference as well as texture.

If there were to be an order to the different textures, it would look something like:

[I am mixing up different terms for the sake of clarity and brevity. Some of these are also weaves, of course, and I’m omitting types of weave as well as types of grenadine.]

You could argue about the list, but it’s essentially an objective judgment of the same thing: how textured, how smooth or not, is the material? This is largely important because it affects the way light is absorbed or reflected.

Below is a diagram showing pattern together with the three other elements – tone, colour, texture and pattern – that should be considered. 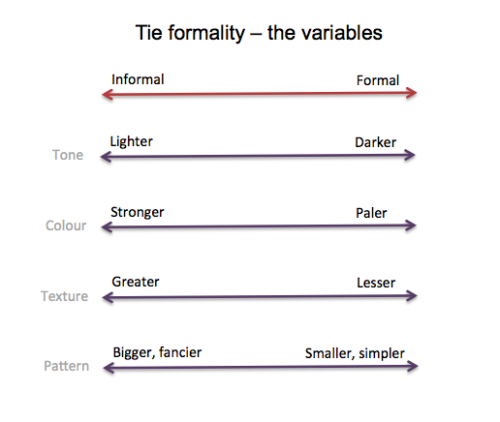 Again, there are things we’re leaving out here, such as finishes on the silk or wool/cotton, but the same principles generally apply.

An important point on pattern is that it matters both how big it is, and how fancy. So a club stripe is a large, dominant pattern; but it’s simplicity makes it relatively formal. A paisley, on the other hand, is usually quite informal even at a lower scale.

Deciding whether two ties with widely different readings on these scales is largely pointless. Is a (muted) pink tie with a large (but simple) pattern smarter than a (strong) blue tie with a (small) fancy pattern? It doesn’t really matter.

The important thing is that if you want to know which tie to wear to a formal event and which informal, you have four elements to consider.

A satin tie is often great for an evening event because of its sheen (but is smarter in navy than in yellow). A grenadine, in navy or black, is perhaps the most versatile of all ties because its texture sits in the middle of the spectrum.

Reader (I think you were anonymous) I hope that helps.

All ties from Drakes

You can follow the discussion on How smart is my tie? by entering your email address in the box below. You will then receive an email every time a new comment is added. These will also contain a link to a page where you can stop the alerts, and remove all of your related data from the site.