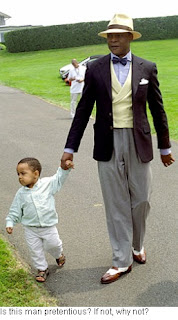 On more than one occasion in the past, I have been accused of being pretentious in the way I dress. Presumably, that means those people think I was pretending to be something I was not.

Sometimes, whether accused of it or not, that may be true. After all, it is a fear of appearing pretentious or out of place that makes one feel self-conscious about wearing particular items. It is the reason I don’t wear a trilby, braces or a cravat.

I’d love to, but I don’t think I could ‘pull them off’. In other words, I would be afraid I was pretending (so being pretentious).

But how do you stop pretending and become the person that can wear those more extravagant clothes? I think the important link here is to another group of words: affected, conceited, self-conscious. Style should be casual, easy and unforced.

It is linked to the Italian concept of sprezzatura. It was captured by Hardy Amies’s edict to forget all about your well-chosen clothes as soon as you step out the door. The tendency not to do it was expressed by Coco Chanel’s recommendation to look in the mirror before you leave the house, and take one item off.

If clothes are affected, it means they are false and do not suit the personality that wears them. That person could be conceited, and will probably be self-conscious, because they do not suit him and his character.

But we’re left with another phrase to define: that which suits someone’s character. I suggest this breaks down into three areas:

Comfort and habit
Men that are at ease in their clothes have dressed that way for a long time.

Yesterday I was wearing a pair of bright white trousers that, having never worn anything similar before, made me a little self-conscious. Then I saw a man coming the other way, wearing similarly blazing-white trousers, a double-breasted blazer, co-respondent shoes and a cravat. On its face, his outfit was more pretentious than mine. But he had obviously worn similar clothes for years and felt entirely at home in them. He was not pretending to be anything.

So youth and a changing wardrobe are a disadvantage. But this does not mean you should not wear anything daring. It means you should take it one step at a time.

I’ve only been wearing pocket handkerchiefs in my jackets for around two years. At some point in the next 10 years I will probably start wearing formal hats – it will feel odd the first time, but not as odd as if I started today. I rarely wear both a tie and a handkerchief, but recently I have decided I like to wear a white linen square on more formal occasions – when I am on stage at a conference or ceremony, for example.

Being ill at ease and self-conscious in your clothing often results in adjusting it constantly – tugging at the pocket handkerchief, adjusting the tie and glancing in every reflective surface. Equally, this discomfort can be caused by clothes that are just too tight, or restrict you.

To avoid pretension you must be comfortable in your clothes. This is a result of both mental and physical comfort.

Knowledge and rule-breaking
Knowing the history of the clothes you are wearing, what they were originally intended for and what rules were formed as a result is a big plus.

A man that wears a strongly pinstriped jacket with pale jeans would usually be viewed as crass and ignorant. Possibly pretentious.

But if that man is Alan Flusser, and you know that he knows every rule and guideline there is, you pause and reconsider. He is breaking those rules on purpose and with an aim in mind. You may think he fails, but you can’t argue that he is necessarily wrong.

Equally, wearing unusual clothes with the propriety they were intended for stops you pretending to be anything you are not. Knowing and applying the rules well stops you looking affected. It should also help with the first point – making you more at ease.

Take the knowledge that enables you to tick the second point on this list, and then twist it to your own personality. You then cannot be false because you are you. And you’re much more likely to feel comfortable and not check your reflection in car windows.

Obsessively following rules just makes you a nerd and a bore.


These are my instinctive ideas on what stops a man being pretentious, and allows him to deny that accusation. I think you need all three to qualify. And I am not suggesting by any means that I have always qualified. Any man with any interest in clothes has memories of ill-considered clothing that make him cringe today.

I tend not t want to look like everyone else.
I wear good suits with no tie (1of which is black with thick pin stripe)and yes in winter I wear a black trilby because it is cold and wooly hats don’t suit me, also they look ridiculous with a suit.
However I also have 2 other trilby’s (1 black with a diagonal pinstripe and one grey check)that I wear with smart jeans and smart boots or shoes. I get a lot of ‘cool’ comments from people aged 18-30, whic I am very comfortable with.
Thanks for the information, great blog.

YOU SAID…..”To avoid pretension you must be comfortable in your clothes. This is a result of both mental and physical comfort.”

That is THE key. Well said.

I love clothes, inherited this passion\addiction from my father and 3 older brothers

My dad is a renaissance era Harlem jazz cat – impecable classic taste. My older brothers are late 70’s early 80’s hip hop era style mavens and absolute clothes junkies – and I am the very happy recipient of all their knowledge and style advice.

In the black community, clothes mean everything – brothas LOVE gear! The italians have ’sprezzatura’ – the spanish ‘tener duende’ – and in the urban community we use terms like ’swagger’ or ‘flavor’ or ‘fly’ to define our style and individuality.

I have always bordered on the very ostentatious peacock style where my clothes are concerned be it casual or dress, but as I near 40 I have become decidedly more conservative, but still manage to throw in a a dash of “flavor” be it casual or semi-formal attire, which due to my lifestyle I wear both regularly.

I always felt that my personality and presence is what makes the clothes I wear come alive, and I am confident that I can wear almost anything, but I have over the years developed my own personal style and know what looks good on me and what works and what doesnt.

I think your observations on avoiding the accusation or assumptions of pretention are pretty accurate. I alwasy view my body as the pallate, and my clothing as the medium I use to express myself and communicate to others how I want to be percieved and who I am. If you are a confident man with a good sense of self and a little knowledge of clothing you can work wonders in a sartorial way.

Great post. I aspire to your sense of fashion and style. I especially appreciate your comment that rules can be broken. I think it’s important to break with convention from time to time. Not in a careless or sloppy way, but in a way that shows confidence and a sense of self.

A very interesting article and one which we all should review now and again, just to remind ourselves that experience gives us the confidence to dress the way our self would want.

I started quite early (high school), back in the early-mid 1980s when one of the rages was Japanese minimalism (e.g. Commes des Garcons, Yohji Yamamoto, etc.). Being so young and wearing something quite daring was not without its hazards. But it suited me and there were many who said so (and many more who said the opposite). But I have always been comfortable with criticism, as long as it was non-violent.

Nowadays, I never leave a jacket without a pocket square, I wear a hat nearly half the time (although, this summer might be different as I lost my Montecristi), and lately I have been wearing a lot of bow ties during my casual weekends (always with a waistcoat of some kind, even with jeans). People do stare but I guess such weekend attire is not what they are used to…anymore. Such a shame though. Any city would benefit from more men whose casual weekend is not flip flops and Tees.

Oh and I think the gentleman in the photo is not pretentious. He seems quite comfortable with himself.

I like your thoughts on this. I’m just beginning to discover good style and am reading around the subject, but one thing which has both surprised and profoundly irritated me is the propensity that society has to deride men interested in style as being dandies; as if it is not becoming of a man to be interested in his appearance.

It is absurd to think like this. Why should women be allowed to take care in the way they look but not men? We all want to look good, regardless of gender; that’s a basic fact. We want to make a good impression. As 90% of our body is covered in clothes, it makes sense to pay attention to getting this right. I myself have become an object of ridicule by my friends, otherwise intelligent people, for revealing to them my newfound interest in style. Why should there be anything wrong with that? Why should men’s style be something done but not talked about?

“To thine own self be true
And it must follow as the night the day
That thou cans’t not be false to any man.”
Or,more importantly, yourself .