Will, Minnesota: Simon, I wrote to you before on a style matter. As I’ve sought suits and separates lately, I’ve learned that while I thought I was a 40, I am truly around a 38 long – sometimes a 36. In-turn, I’ve learned that some designers will fit me better than others and in ways that I prefer. After having bought two suits, a Valentino and a Z Zegna, from Bloomingdale’s at more than 50% off, I write to you again.

I know that these names, as well as Hart Schaffner Marx, Armani, and many others are high-end brands. I know that Boss is a little bit lower and Ralph Lauren, except for his purple and black label, is lower still. Without giving me an exhaustive and exhausting list of names, please tell me the tiers of men’s suits and brands. Or if you’ve already done so, please direct me to the column link.

Dear Will, there is no obvious or easy way to rank the different designer brands. Much of the ranking you state here will be based on advertising, your tastes and on inevitably on price.

The key to comparing designer brands is to remember that you are paying for two things – design and construction. A $2000 designer suit is not twice as well made as a $1000 one. It may be made slightly better (say 10%, 20% more invested in materials and workmanship) but most of the extra price is for design. 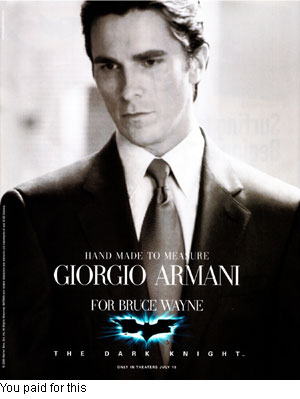 Design is great. It brings beauty into the world. But most of the time when men buy a suit they don’t want to pay for design. They want better materials and quality. So just pick a design you like, irrespective of the price. You may have expensive tastes or cheap tastes. But work out what you can afford and pick the design you like best for that price.

This is entirely separate to quality of construction. I recommend a few things to look for below, but I would also recommend the relevant section of Alan Flusser’s Style and the Man, which goes into assessing cloth and construction in more detail.

– Check that the chest is fully canvassed. When you pinch the material around a jacket button, holding both sides of the cloth one in each hand, you should be able to feel a floating piece of material between them (this is horsehair or a horsehair blend, and gives construction to the chest).

– Check that the buttons are horn rather than plastic.

– Try holding the cloth and feeling its weight. It should be flexible to the touch, have a satisfying heft and spring back well when scrunched (as you can see, this ‘feel’ for cloth is something hard to describe).

– Check how large the armholes are. A smaller armhole is less efficient to make and more personal to the wearer. Cheaper brands make bigger ones to fit more people.

– Check that the trousers are at least half-lined. While some men prefer trousers unlined (particularly as it makes them easier to press) a lining is generally a sign of quality.

– Check the matching of patterns. Checks or stripes should match across pockets and across some part of the chest into the sleeve. As with many of these points, this really shows attention to detail rather than quality of construction – but that’s the best guide you have, you have to assume that attention will have been pursued elsewhere as well.

– Working buttonholes used to be a sign of quality, but so many cheap suits do it now that I would ignore this.

These are just a few things to check. Much of it is a question of taste as well. I hate a jacket that doesn’t roll naturally from the top button to the middle button of three. And it is harder to construct, so you could say it shows quality. But then some people do prefer harder-lapelled, ‘true’ three-button suits.

The other thing to remember when separating design and construction is that you are paying for a brand’s advertising, shops and runway shows. Armani spends more on this promotion than, say, Canali, which in turn probably spends more than Hart Schaffner Marx. Armani ads create desirability and cool, but you pay for it when you buy into that branding. Profit margins aren’t necessarily higher at designer brands, but costs are.

(Though often designer labels do use their position to charge higher margins. One former Berluti employee tells me that their profit margins can be higher than 75%, for example, charging almost 50% more than an English shoemaker I know with the same cost price.)

One answer to this, of course, is to get discounts – as you have done. Anything over 50% and you’ve removed most of the profit. Kilgour’s recent clearout sale got me rather a fever given that some suits were priced at £250, down from over £1000.

To conclude, don’t assume that brands have any set pecking order. Judge the design on its own merits and your own taste, not the label or the price tag. Then analyse the quality using my pointers and other research. And finally, get a discount.

Having decided to avoid the Brands and go the bespoke route for a suit for my son’s wedding, research was in order as I had not done this before.
I came across your website and together with all the excellent information therein, (followed it since) plus a trawl through relevant sections of The Rake and Flusser’s “Dressing the Man” I armed myself with an exhaustive list of what to watch and ask for.
The next and main task was a tailor – I live in Singapore and have often run the gauntlet of touting tailors at various shopping malls here, promising made to measure and even bespoke suits – yes bespoke – in anything down to eight hours.
There are a few bespoke tailors in Singapore but personal reference from friends and colleagues did not reveal them.
Back to the trusty internet and I finally found Raffles Tailors in Delfi Orchard – Orchard Road – run by Mac Ho who from his website at least, appeared to have a classic tailoring and design training and philosophy as well as being the recipient of several awards.
I called for an appointment and Mac duly welcomed me (Flusser’s book on the coffee table – a good start) and we discussed all manner of things tailoring.
My shape is somewhat “portly” – a lifetime of good food and drink – and just under six feet tall, so I challenged him to make me look as good as he could.
He first sketched a design and we spoke of natural waist, jacket length, vents or not, two or three buttons, sleeve length and number of functional buttons, lapel style and length. armhole sizing, height of waist in the trousers, pleats, cuffs, fastenings etc.etc.
We decided on two buttons for the jacket, ventless (most slimming according to Mac – I will just have to keep my hands out of my pockets) average width slightly peaked lapels to give the impression of more length and jacket length just to the end of my thumb. Pleated natural waist trousers, no cuffs to look longer, two pairs, both with three waist fastenings, one with belt loops and one with side tabs.
On to the cloth selection – a nice Italian worsted at about 240gms, more dark than mid grey.
Timing – he prefers six to eight weeks but I had left things a bit late so he agreed to “rush” it at five.
The measuring began – too numerous to count – and once completed I was on my way, due back in two weeks for my first fitting – he makes up a suit in a cheaper cloth to get everything as close as possible before the cutting of the chosen cloth.
First fitting and the mock-up feels remarkably good – a few adjustments in the shoulder and chest area, armhole a bit higher, button positioning, fiddle fiddle with a few things until he is absolutely satisfied, then off with the sleeve, fiddle fiddle some more, check the waistband of the trousers for height, add just a bit and off I go again – another fitting in a week.
Same mock-up suit with adjustments and a few more small ones at this fitting and Mac is off to cut the real thing.
Ten days later I am in the almost finished article – I am very pleased – sleeves slight adjustment so the sit on my wrist bone and trouser length to remove the very slight break at the back (they are half-lined), a touch in at the waist.
I pick it up three days later, on time and fitting perfectly – what a good and I suppose lucky first time experience.
I have of course recommended him to anyone who will listen and I do so now to your readers.
His charges for a suit start at about Singpaore $ 1900.00 which is about Sterling 800 at today’s rate, and they move up from there depending on cloth.
He has also started to make a small selection of ready to wear suits from about S$ 1100.00, Sterling 475 which price includes alterations – for those without the time to spare.
Raffles Tailors – Mac Ho – 02-18 Delfi Orchard, 402 Orchard Road, Singapore. +65 6733 1336.