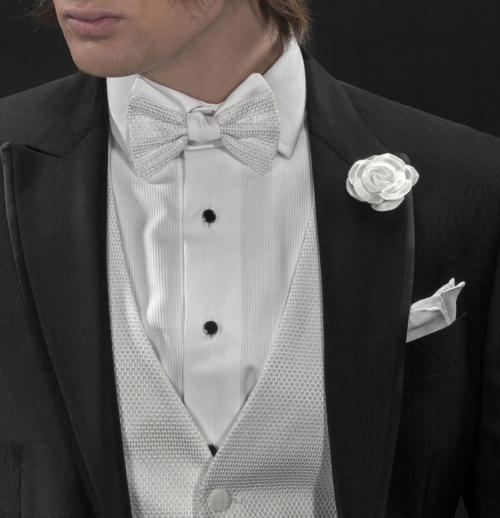 A white pocket handkerchief, like any element of a man’s attire, is most elegant when it appears to be arranged nonchalently, casually. But that doesn’t rule out a square fold.

A friend told me recently how he always stuffs in his white (linen) handkerchief points uppermost, in the morning and whever forced to use it. He folds it in half, stuffs in the middle and lets the points fall as they please. It is a relxed, degagé look.

But you can stuff a square fold too. People always assume that a square fold, where the handkerchief edges run across the top of the pocket rather than sticking out of it, has to be millimetre-perfect and razor sharp. Why?

Sure, that’s how the arrangement was popularised, by TV presenters back in the 1950s and more recently by TV shows like Mad Men. But that isn’t the only way to do it. Besides, a fold that sharp is so tough to achieve and then maintain. The geeky effort involved is there for everyone to see, on display.

Instead, I recommend just folding the handkerchief twice, or enough such that the width is less than that of the pocket, and stuffing it in square. It’s something I see my friends at Kiton do all the time, and something I admire. You can see the effect in my two recent photos – of the A&S suit and the wedding shot too.

The corners do not remain perfectly aligned. They are caught by the friction of the pocket and wriggle into a random arrangement. As with a ‘points’ approach, you can tug at the corners as much as you want if you judge the look needs a little adjustment. Just don’t make it look too perfect. Oh, and stuff it so the points are to the outside and at the front of the pocket.

Points can look just as studied as a square. And to my taste, points will always be a little dramatic.

Would have been great with some illustrations in this post 🙂

THE PERFECT ILLUSTRATION WOULD BE PHOTOS OF PRINCE PHILLIP THROUGH THE DECADES WITH THAT SIMPLE UNDERSTATED ELEGANT WHITE FOLD YOU NOTICE IT BUT THEN YOU FORGET IT JUST THAT BIT OF CONTRAST THAT DENOTES TASTE AND SOMEHOW BRINGS YOUR EYES TO NOTICE THE CUT AND DISCRETE NATURE OF THE SOMBER SUITS HE HAS WORN THROUGH THE AGES.

I like the “TV fold” when wearing certain suits, or a more ruffled look with a sports jacket, but it all depends on the outfit for me. I agree though, if it looks to pointy the attention is drawn to the pocket… much like a small animal trying to spring out of the jacket pocket.

I think for variety you can use prefolded handkerchiefs from time to time to spice up your individuality. Its a novel way to be different.

I have been trying to expand both my collection of squares and different folds that I use but am running into some problems which I’d appreciate your views on (if you still monitor older posts).

I am finding the size of the pocket squares vary dramatically. Whilst the smaller ones are fine and can follow the recommendations of on here and elsewhere, some of the squares I’ve bought/ been given are up to 18″ long per side and so there is simply too much volume of fabric. For a puff the pocket simply looks too bulky, anything involving peaks requires lots of extra folds that become messy and uneven which means a simple square fold is all that I can do.

Now the most obvious answer is, dont buy such large squares, but on the basis that reasonable companies like Thomas Pink continue to make them I was wondering if I am missing something obvious as to what you’d want such a large square for?

Hi Dan,
It’s interesting you should say that. If anything, most people comment that modern hanks aren’t big enough. In a suit breast pocket, they tend to collapse and not have enough to fill the pocket, and therefore not fall down.
If you pinch the middle of the hank and hold it up, then gather the four corners together and fold in half, so the middle and corners are together, is the result puff/points still too bulky? If so I would suggest either your suit pockets are unusually small or the hanks are of a very thick silk…

Many thanks for the reply. Can you clarify what you mean by “fill the pocket”? as in get an edge to edge result outside of the pocket or make the pocket itself look full?

I find with some of the largest squares I have to fold it more than once to get a reasonable amount showing without the excess also sticking out the pocket and this is when the pocket itself looks excessively stuffed, in my opinion. That said, I’ve been looking at a number of tailors sites/ upper end retailers etc and whilst most have a cleaner looking pocket I see that some do sport a stuffed look including a number of your own photos and perhaps its my expectation thats wrong.

As to my suits having undersized pockets? Don’t believe they are, most are high street RTW and one MTM by Ede & Ravenscroft and I’ve never gone out looking for a small breast pocket nor asked it as an alteration but I am not the tallest of people so perhaps they are slightly smaller than average as its a “short” suit.

Hi Dan,
I meant reaching the bottom of the pocket. That is what will stop a hank falling down into the pocket.
It sounds like it may just need to look a little stuffed. That isn’t always a bad thing.
Simon