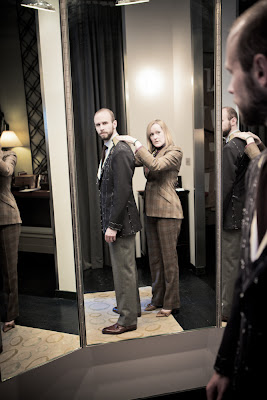 Last week we had the second fitting on the Gieves & Hawkes travel blazer. Given that I’m a new customer and so we are creating a new pattern, both were basted fittings and the first looked much like this one, just with a poorer fit.

At this stage it’s coming along nicely. I was interested to see that the shoulder padding was not as great as that in my Huntsman jacket, but was still noticeably more than that employed by the likes of John Kent or Henry Poole – and neither of those is exactly known for soft tailoring. 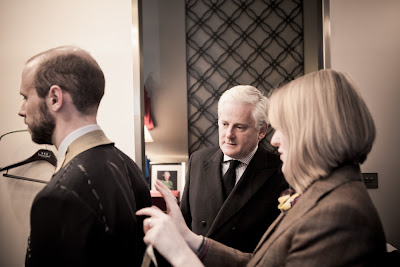 The only points of alteration needed after this second fitting are a little stretching of the cloth across my relatively large shoulder blades, and a picking up of the right side. You can see that that side looks a little less clean than the other, both in the sleeve and forepart. Kathryn suggested narrowing the lapel from 3¼ inches to 3, but I think that would be too contemporary. 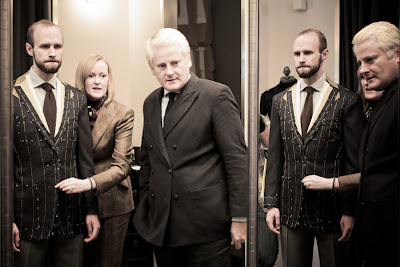 There are a number of options for the removable buttons and we still haven’t settled on which will work best. The method often used on white Marcella shirts or waistcoats (where you might want the option of buttons or studs) is to have a hole rather than a slit, poke the metal shank through and secure it with a special pin. The design is much like a hair pin.

The alternative on these shirts or waistcoats is to have all the buttons on a placket, which makes them that much harder to lose. This method will be employed on the cuffs of the Travel Blazer, but we’re not sure yet about the fronts. Whatever the fastening mechanism, they will certainly sit in a placket of their own on the inside of the jacket, to avoid catching on the shirt. 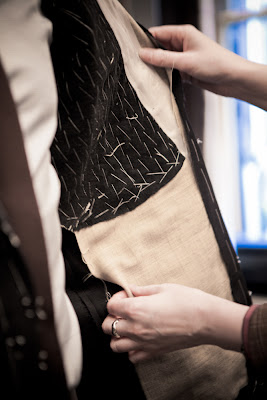 The button options will be brown horn or brass, the latter engraved with the shield of my Oxford college, Trinity. How the horn buttons, which won’t have a natural shank, will fit into the system is another piece in the puzzle.

The fresco trousers felt really lovely. I was surprised they didn’t feel rougher, given how coarse fresco can feel in a bunch, and they are only half lined in the front. We decided the narrow them from 17-inch bottoms, here, to 16s. The fronts will also be picked up slightly to try and give a cleaner finish – though this is always an up-hill struggle without pleats. 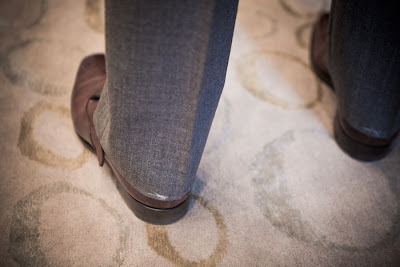 The next fitting, in two weeks, will be finished bar the buttonholes.
Previous post on cutting here. And the original project here. 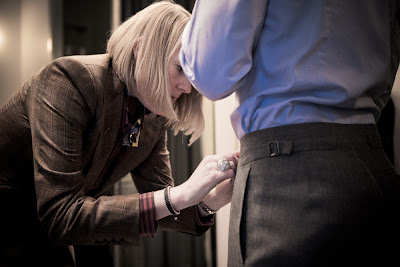 You can follow the discussion on Gieves & Hawkes: The perfect travel blazer 3 by entering your email address in the box below. You will then receive an email every time a new comment is added. These will also contain a link to a page where you can stop the alerts, and remove all of your related data from the site.

Hi Damian, Sure. It's similar to any fine knitwear. You should hand wash, but that can include a hand wash setting on a washing machine, and then be rolled in a towel to take off excess moisture, and dried flat on a rack. Some light…

No I don't think so. It's a subtle difference from normal cotton - nowhere as noticeable as full linen, for example

The guide to summer shirt fabrics

Yes, it could probably be worn in three seasons, if you layer it in colder seasons for example. I'd look for a hopsack around 11oz in that case, if possible

Things with more texture, generally. So tweed, equally textured wools, more robust cottons. Most things you look at and think are casual, rougher. Like denim