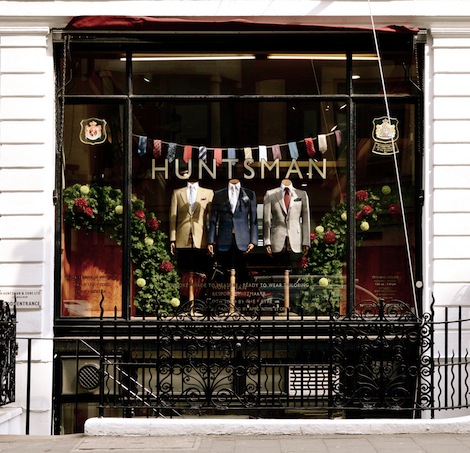 Once more our series of American posts is interrupted by some news.
Huntsman has hired a new senior cutter, Gordon Alsleben. Or rather have re-hired him, as he was an under cutter at the house in 1980 and from 1999 to 2008, leaving as head cutter. Gordon had a reputation for softening the Huntsman look slightly during his tenure.
As well as being a cutter, Gordon is a tailor (he was a self-employed coatmaker during the late 80s and early 90s) and has experience running manufacturing. When he left Huntsman in 2008 he worked for an Indian company, helping them set up stores, factories and a made-to-measure service. He will be in charge of overseeing production at Huntsman, with a new title at the house – workroom manager.
Huntsman now has four cutters: Pat Murphy (head), Dario Carnera (senior), Gordon and Anette Akselberg (senior cutter for women’s bespoke). David Ward, who cut my Huntsman shooting three-piece, left a few weeks ago.
Gordon’s other main employer over the years was Kilgour: he trained as an apprentice coatmaker there, rejoined them in the late 90s and joined them again in 2011 – before coming to Huntsman. He was also briefly at Ede & Ravenscroft. 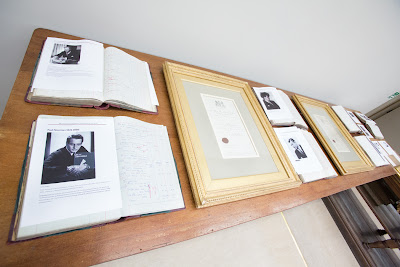 As well as this hire, Roubi L’Roubi has ordered a cataloguing of the entire Huntsman archive, which has never been done before. The house has complete records going back to 1849. The archives will be displayed on the shop floor (example above).
A refurbishment is also going on that will move all of the cutters up to the first floor and open up the ground floor for sales, examples of bespoke and ready-to-wear. It seems rather a shame not to have cutting on the ground floor, but it was the original set-up of the shop and the space upstairs is much bigger and brighter.

Hi Simon, the mention of Ede & Ravenscroft just got me wondering if you ever intended to do a post(s) on them…

I know you look primarily at bespoke and Savile Row but I would assume that E&R OTR/MTM is more of a realistic ‘target’ for a lot of the readers of this blog.

Also I would be fascinated to hear your thoughts on wrist watches.

(Sorry if this sounds like a complaint – it’s not!)

Keep up the good work,
Oli

Cheers Oli. Ede & Ravenscroft do bespoke as well and I’m sure I’ll do a post on them sometime soon. I agree as well, a post on classic RTW/MTM in the area would be interesting – it makes a big difference if alterations are done by bespoke tailors, and those suits tend to have unfinished sleeves etc as well.

Noted on wrist watches, also. In short I would say: save up a lot and buy something a touch more expensive than you can afford. You will wear it every day and you have to love it. Buying a fairly pricey watch that you decide you don’t like in two years is very expensive.

Checking the “Brands” page I believe you never came to do anything on Ede & Ravenscroft. I would also welcome a clue from you on the value of their RTW. During my last trip to London I found one of their jacket blocks to be quite flattering on me and am considering to purchase.

I’m afraid I don’t know anything really about their current offering. Sorry Nico.
Do have a look at our Guide to Quality pieces to get an idea of the basics in assessing quality though.

Hello! May I add a plus one on this request to cover Ede & Ravenscroft, please?
I remember that they were among the key reasons I got enamored of tailoring while at Cambridge. Their window on Trumpington St and especially the smaller window on Silver St have been a source of many wistful looks on my way back to college from the classes.
They were out of my reach at the time, managing just to buy an occasional accessory, and have since got distracted by softer tailoring, but the appeal of that traditional English silhouette is still there.
I know there is better quality out there, but there is just something about the style of Ede. Would love to hear from Simon on their offering, either bespoke or MTM.
Thanks!

Simon, do you know why David Ward left and where he’ll be next?

No, sorry, haven’t spoken to him

There must still be many great cutters, who are now ” Off Savile Row” or “Off Off Savile Row” to use a take on Broadway, New York, only known by word of mouth. Some of the big Savile Row houses like to speak loudly of their storied history eg. 180? or whatever, others like to be quiet.
I have learnt from one experience to find out where the best cutters are and not care so much for their history. Are their cutter(s) any good!!. That is what matters to me.
Simon!!!, you could start a great series on the best and indeed less well known and even some veteran cutters. Steven Hitchcock, Joe Morgan, Edward Sexton for instance, which you have well covered already. You have already started a great post on some of the regional tailors.
I only noticed this particular cutter who is apparently on his own now in London and I intend to contact him for his starting prices for bespoke.
Great Post
Thanks
Lindsay