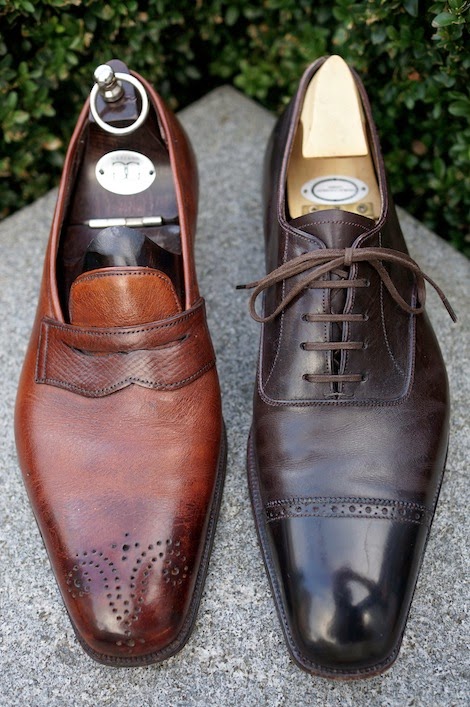 Having tried so many tailors and shoemakers, I am often asked to compare them. With bespoke shoes, the most common question is which maker achieved the best fit. However, the fit often doesn’t vary that much, and most importantly (perhaps depressingly) often takes two pairs to perfect.
The style and construction, on the other hand, can vary more than people think – particularly between makers of different cultures or traditions. In the example I am going to use here, between the Northampton-influenced shoe of Gaziano & Girling and the more city shoe produced by Cleverley. 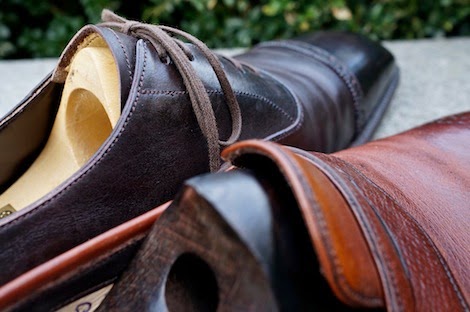 I had these two (pairs of) shoes made over the past three years. They are obviously different in their style and last shape – the slip-on is a relatively conservative square-toe for G&G, while the Oxford is Cleverley’s new Anthony Cleverley design.
The most significant differences are in the thickness and layers of leather used by each maker, however – which becomes immediately obvious when you put them on. The front of the Cleverley shoes are unlined. Both makers use a half sock in the bottom of the shoe, and a lining in the sides, but the G&G lining extends under the front of the shoe, where Cleverley’s does not. 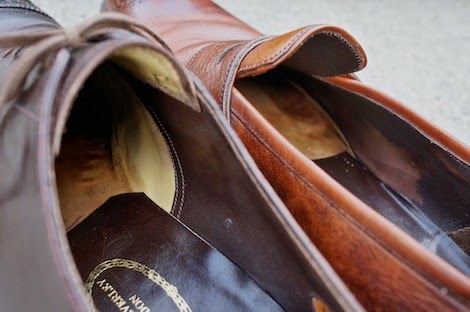 Cleverley uses a thinner leather, generally, particularly on Oxfords such as these. (Although the two shoes here are obviously not direct comparisons, the same approach applies across both ranges.) That means the shoe feels lighter and instantly more comfortable, but it also provides less support, making your foot feel tired towards the end of the day.
The Gaziano & Girling shoe is more similar to the Northampton makers – Edward Green, John Lobb etc – that readers will be familiar with. This is not surprising, for while Tony G used to work at Cleverley, he also launched the bespoke offering at Edward Green and the shoes themselves are all made now in Kettering, just outside Northampton. 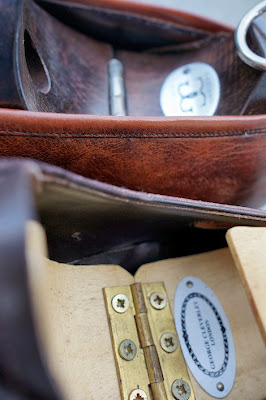 Other giveaways of a Northampton shoe are the aesthetic effects such as burnishing, which requires a rotating-brush machine that Cleverley is unlikely to ever install at the Royal Arcade.
Which is better? Neither, in my opinion. They are simply different styles, each with attendant benefits. But if you’re thinking of having a bespoke pair of shoes made, it’s worth being aware of the difference.

You can follow the discussion on The divergent styles of Cleverley and Gaziano & Girling by entering your email address in the box below. You will then receive an email every time a new comment is added. These will also contain a link to a page where you can stop the alerts, and remove all of your related data from the site.

Hey Jasper, No sorry - our aim is always to be transparent, and that's what shipping with a courier costs. We could charge more for the book and then claim we were just giving away free shipping, but we prefer to be a bit more…

It depends a lot on the country and how the season develops, but I'm still wearing mine now, in April. Though it is a fairly cold Spring in the UK