The sweater over the shoulders 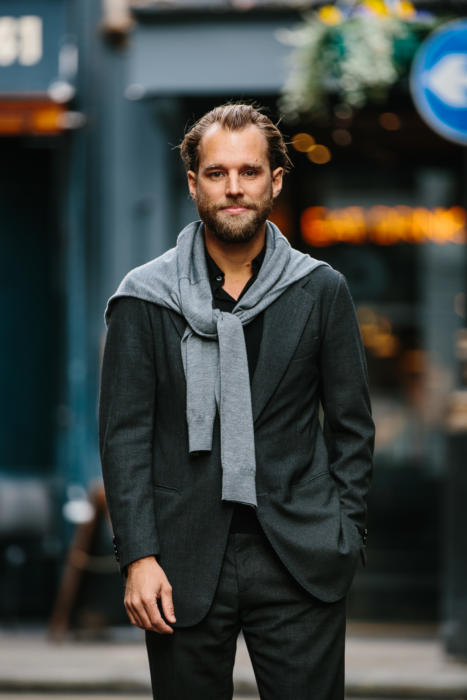 We took this picture of Patrick Johnson, founder of P Johnson, last month.

It occurred to me at the time how hard it is to wear a sweater over the shoulders, as Patrick does. It's something I rarely do, and it's probably worth unpacking why.

As with so many areas of menswear, the enemies here are pretence and connotation.

Appearing natural in your dress has long been central to definitions of style. Elegance, grace, sprezzatura: all involve the idea of appearing at ease and unforced.

Beau Brummell and the hours of work required to make his neckwear look natural are often referenced, but the idea crops in the ideas of taste and style in many different cultures.

When the effort involved in an outfit becomes obvious, it risks looking mannered and affected. (Terms such as stuffy and stiff might also be used - the idea of constraint is central.)

Such unnaturalness becomes more likely the more ostentatious a piece of clothing. So a key problem with wearing a sweater over the shoulders is that it attracts attention, and appears too deliberate. 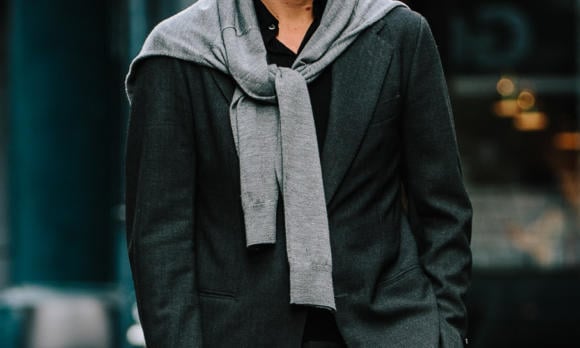 How do you avoid this? Most obviously, by wearing it as naturally and with as much ease as possible.

So tying the sweater a little askew, for example. Having it slanted ever-so-slightly to one side. (Although not so much as to appear deliberate, of course.)

Perhaps it helps if the knitwear is thin - a fine merino that looks a little wrinkled and rumpled.

It is certainly helped, on Patrick, by the softness of his tailoring and the dark, monotone colour palette. There are no showy patterns, no other suspect pieces of ostentation (not even a pocket handkerchief). 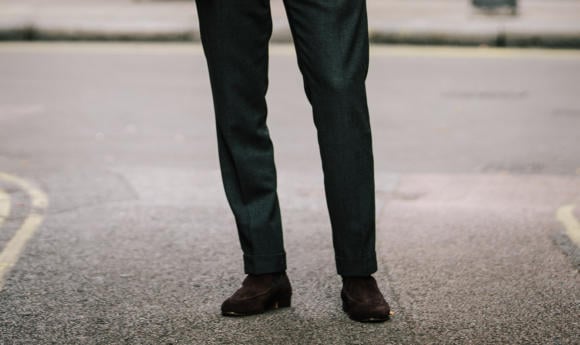 This understated style also helps with the connotations.

Whether we like it or not, our ideas of style are influenced by what we see others wearing, and in what contexts. A sweater over the shoulders is associated by many, rightly or wrongly, with the landed upper classes.

You might like that association, of course, but if you want to avoid it then dressing in decidedly urban colours is a good first step.

No checks, no tweeds, no bright life-saver colours. Just shades of navy, white, grey and blue.

More on Patrick Johnson and their London pop-up shop soon

You can follow the discussion on The sweater over the shoulders by entering your email address in the box below. You will then receive an email every time a new comment is added. These will also contain a link to a page where you can stop the alerts, and remove all of your related data from the site.

Thanks Nick, I will

The second jacket from the left in the last picture, what type of fabric and weave is that?

Perhaps. I can certainly see your point. I think it looks OK myself, just because the jacket looks so controlled and straight in its lines, if that makes sense, and the trousers do too.

Hi Jon, If you're already having pieces made with Elia, there will only be lightweight canvas and padding in there yes, and same with Ciardi. I would stick with that for tailors like those, as there isn't much to reduce and completely unstructured jackets are…