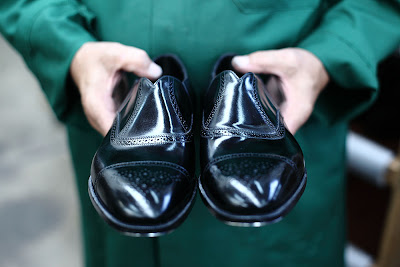 Good English shoes are pretty much always worth the money you pay for them. Three things reminded me of this in recent weeks.

One was a friend’s wedding. After years of buying in the low end of the market, he bought a pair from Crockett & Jones to get married in. I was staggered how good they looked on him. Dark brown Oxfords with a toe cap but no broguing, they were a shining example of how poor the average quality is of men’s shoes. Crockett & Jones are not very expensive, certainly by the standards of some of the brands on this blog, but they looked a million dollars.

Second, a colleague was bemoaning the state of his work shoes and how he needed a new pair. They were cheap, pointy, glued ones from Jones or some such. Because they are made with a corrected grain, the scuffs took away any pretense at leather on the surface. Because they had no internal structure, they curled up at the ends. He’d had them a year.

The third thing was the string of comments on recent posts about bespoke and made-to-order shoes from Gaziano & Girling and Cleverley. I realise that for many men these are not viable options at £1000 to £2000. But I hope they illustrate the beauty of English shoes, and provide inspiration for buying good, ready-to-made models. I will make a conscious effort to reiterate this in future posts.

Crockett & Jones shoes cost £300-and-something. A glued pair from Jones costs around £100. The former will last five years easily, with a resoling or two, while the latter looked terrible after a few months and trash-worthy after a year. Which do you think are better value?

I have my favourite English brands. Edward Green and Alfred Sargent are among them, plus the bespoke makers already mentioned. But as I’ve said before, with English shoemakers you generally get what you pay for (I can’t speak for those whose prices are decided by an Italian fashion label).

It has been suggested that I don’t like Barker (standard range) shoes. This is not true. They make great shoes. I would always prefer someone buy Barker than an imported, glued pair, and they will last much better. But more expensive English shoes will be better quality, and if you’re going to spend £1000 on a suit I think you should spend up to half of that on your shoes. The shoes will be more versatile as well.

Buy good shoes, don’t wear them every day, put shoe trees in them and brush them down after use – you will actually save time in less-frequent polishing. As far as retail outlets go, John Rushton just off Oxford Street is always worth a shout.

In Northampton we have the greatest hub of quality shoemaking in the world. It’s time more people took advantage of it. 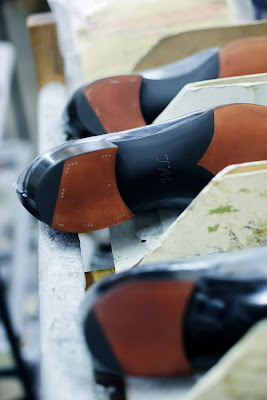 You can follow the discussion on Buy good English shoes by entering your email address in the box below. You will then receive an email every time a new comment is added. These will also contain a link to a page where you can stop the alerts, and remove all of your related data from the site.

No, don't crease your jeans! Unless you're going for a very deliberate, old-fashioned and geeky look, pressing a crease is a bad idea. Jeans generally look nicer with tailoring if they have a smaller turn-up or roll, so tend in that direction. There's even an…

No correlation between gorge and cloth, no. The gorge height is a style point, more akin to the width of a lapel. It varies over time in a similar way, and at the moment is probably trending downwards actually, to lower on the body, after…

A little longer, but not much bigger. I haven't seen what they do being that short and tight, but perhaps other customers have asked for things to be closer fitting.