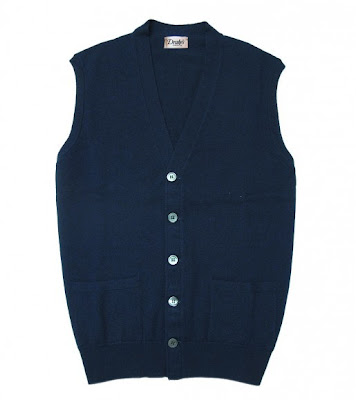 One of the disconcerting things about the growing popularity of Permanent Style is the regularity with which readers find old posts – usually via search engines – and question me about them. I dislike being called an expert today, whether it’s on questions on style, manufacture or fashion history, but I certainly know a lot more than when I started writing, over five years ago.
This is the first in an irregular series of posts on things that I got wrong. Or rather, more accurately, things about which I have changed my mind.
Almost exactly four years ago I wrote a post (Why sweaters cannot be stylish and practical) arguing that while the sleeveless cardigan was eminently practical in its colour, warmth and lack of bulk under a jacket, it could never be stylish worn on its own. The ordinary cardigan looks far better, I argued, but of course its sleeves make it less practical under a jacket.
The logic is faultless, but I think I was a little harsh on the sleeveless cardigan. It can, like many other items of classic style, appear a little fuddy-duddyish, but a little attention to how it is worn is all that is needed to avoid this association.
First, stick to dark, classic colours. Navy, as with any sweater, is the most versatile colour and should be bought first. After that, either a mid-grey or another dark colour such as bottle green.
Second, balance the rest of the outfit. If you are concerned about its associations, don’t wear a sleeveless cardigan with a tweed jacket and bow tie; try raw denim jeans and a washed cotton jacket instead.
And third, wear it to its greatest advantage: under a jacket. In this context it performs many of the same functions as a waistcoat, creating an attractive V on the chest and hiding the often messy area around the waistline. If you are not wearing a tie, it is one more much-needed piece in the ensemble. If darker than the jacket, it attractively shadows the line of the lapels.
I have three sleeveless cardigans, all from Drake’s, in navy, biscuit and cream. The navy is worn every week, usually with a jacket and jeans; the biscuit I like only under a suit but provides a nice accent to grey flannel; and the cream is worn even more rarely, but works best with a white shirt as a subtly alternate tone.
Oh, and always undo the top and bottom buttons. Even two at the top: it encourages a lazy flop in a tie that is consistently appealing.

Very glad you have ‘evolved’ on the sleeveless cardigan issue, as politicians say here in the US. Middle-aged Italian men continue questing to take over the world of men’s style, and I’m all for it. Your last step is a journey into color. Francesco Maglia rocks a mustard vest, and Antonio Liverano an orange one. I have all these and more & recommend them, though if one has to ask “Can I…” then one probably can’t. 🙂

What about chocolate brown – would that be a versatile colour?

Yes, could work well. Maybe if there’s less brown elsewhere, in the accessories for example

When wearing a jacket over such a cardigan, should it be buttoned-up? I’ve always preferred an undone jacket when wearing a waistcoat/sleeveless cardigan, as it just seems to look better, but this flies in the face of the rule about always buttoning your jacket…

Great idea Simon, since I’ve been following your blog since inception… the older and wiser, the less severe with our opinions, we get…

Italians are now adopting (promoting) the sleeveless card…, but I’ve always seen it present on the streets here in Rome. If everyone, every job,every day including Saturday and Sunday, had to wear a suit, or a jacket and tie, you would be amazed at the inspiration you could find.

A chalk stripe grey flannel suit, brown grenadine/knit tie, light cream or white shirt, and a beige cardigan blows your mind if done right…Guess if you live in Italy you can do these things…

Who would have known some things never go out of style, or is it fashion?

proper grandad cardi.
not sure about these. i prefer full length sleeves & at £295 it’s a hell of a risk.
how do afford them???

I’ve long wondered why John Smedley doesn’t offer a sea island cotton waistcoat. All they would have to do is chop the arms off of their regular cardigan. It would be a welcome choice for Spring and transitional weather with a lighter suit. Simon, can you ask them?

Reviving this old post, have your feelings on this matter changed? I don’t think I have ever seen a picture of you wearing one?

No, my opinion is the same – I would just particularly emphasise the way something like this is worn. With a tweed jacket, flannels and suede shoes, it can seem a little old-fashioned.
You’re right though I haven’t included pictures of them for a while – though there’s actually one coming up in a post in a couple of weeks

Hi Simon,
Still another reader here finding old posts to come and haunt you.
You advised wearing the jacket buttoned over sleeveless cardigans. However the rule for 3 p suits is always unbuttoned. Do you advise the opposite because it is an alternative take for a casual approach, eg with odd sports coat & trousers?
In the same line, would you say that other classical no-nos such as showing belt under waistcoat can be broken for such casual approach? It is hard not to anyway, with médium rise trousers and not baggy cardigan.
I guess there has been time and switch to casualization for your opinion to evolve.
Thanks,

The rule is not to wear a three-piece suit with the jacket open. I’m not sure where you heard that.

Any bespoke suit made with a waistcoat will be cut so it fastens perfectly over the waistcoat, and with the assumption it will be worn that way. Plus if the jacket is always worn open, it slightly defeats the point of having the jacket well fitted to you.

Of course, a three-piece does look good with the jacket unbuttoned, or at least better than one without a waistcoat. But it shouldn’t be the default.

With a sleeveless cardigan, the jacket can be worn either way, and I wouldn’t be so prescriptive as to say it should be open or closed all the time. Most well-dressed men you will see will do both.

But there is something particularly appealing about the strip of a harmoniously-coloured cardigan running up the line of a jacket’s lapels. That is certainly something to aim for sometimes.

On a belt under a waistcoat, no this always looks too bulky and too casual for a three-piece suit as well. Side adjustors should be worn, if not braces.

Thanks Simon. Bit of a mix up here…
1 – The most outright view on such ‘rule’ I picked from SR Schneider (Gentleman’s Gazzette). Not that I take heed of all his opinions, but he seems generally knowledgeable. Then it is frequently depicted in XX Century first half illustrations such as Apparel Arts, and pictures of well dressed men such as Sir Anthony Eden. Finally there was the reference of formal dress, as with tailcoat.

2 – Belt I meant under sleeveless cardigan + sports coat + odd trousers, not with 3 p suit. I figure out sharp lines matter less with the former, no discussion with the latter.
I wonder why it would not qualify at least for sprezzatura, given that grotesque – bordering approaches such as Agnelli’s over-cuff wristwatch or Avoriaz boots with suit have been renowned in menswear literature.

1 – Well, I won’t comment on GG’s advice. On illustrations, that is certainly one way it can be worn, and is therefore pictured, but they’re also pictured with waistcoats and the jacket buttoned. Lastly, formal dress is a different category, and made to not be buttoned.
And as I said, the Savile Row tailors that have made three pieces for me have all assumed the jacket was to be buttoned as the default.

2 – Ah I see. Yes, that’s better with a sleeveless cardigan, but I’d still generally advise against it. It will usually get in the way.
On sprezzatura, that’s just not what the word means. It is so frequently misused. It should be something that seems careless. Have a read here.