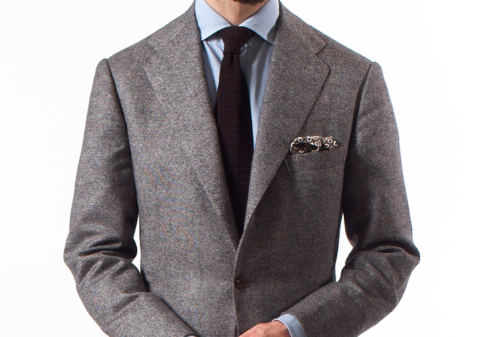 Following your Calvo de Mora combination [above] What are your general guidelines to wearing a black necktie? Most of the time I see it paired with the classic ensemble of white shirt with a grey jacket/grey suit. Any other combinations?

Worn with consideration, a black woven necktie can be almost as versatile as navy. It is dark, conservative and professional; if there are any risks, they are excess contrast or a touch of dullness if there is a lack of variation elsewhere.

Let’s start with the benefits. A plain, dark tie provides a base for an outfit, a pivot about which the rest of the ensemble can turn. Navy is the most versatile option, and a navy grenadine is particularly good at bridging formal and informal – it’s the only piece of clothing, along with a white linen hank, that I always pack when travelling.

Black is almost as useful, but is obviously darker and a touch more dramatic. Black ties are often worn with white shirts by models, salesmen and misguided movie stars. It looks striking, even glamorous from a distance, but cheap close-up.

Which is why we have to mitigate the risks. First up, avoid plain woven or printed silk, and particularly satin. Navy can be used easily in any of those materials for a variety of situations, from evening to day wear; but black is not as versatile.

Instead, start with a knitted silk (as shown above) or a grenadine. Both can be worn with suits, but come into their own with tonal combinations of sports jackets and trousers. In the outfit this photo comes from, the black sits well with a patterned grey jacket and charcoal trousers.

That black tie could also work with my brown tweed, or possibly navy Thom Sweeney, but in both cases a navy grenadine would be better. It would, however, perfectly suit my Rubinacci donegal – which is no coincidence; both that and the Calvo jacket above have black in their weave, which is always a good first step is assessing colour combinations.

In the image below, Mats at Trunk avoids the issues of a black tie with a similarly monotone outfit, made up of cream Incotex chinos and a grey Piombo jacket. He also demonstrates how formal a black tie can be – navy would not have been as smart.

A blue shirt is another obvious way to mitigate the risk of a black tie, and it would have softened Mats’s look (while losing some of its impact). 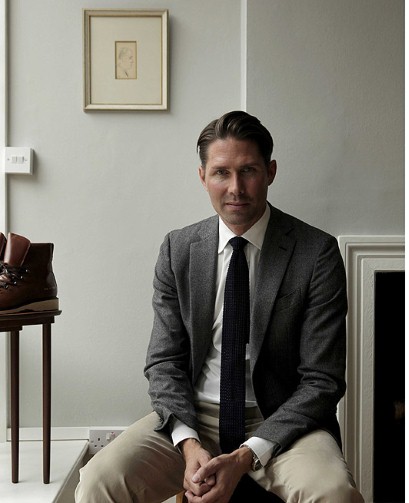 As you would expect, a black grenadine is more formal than a knit, but not as smart as a normal woven tie. Grenadine would have added a touch of formality to my Calvo de Mora combination above (as would replacing the silk hank with white linen) and would also have been more suited to a suit.

On that note, black ties work particularly well with brown suits – reflecting the fact that black shoes work well with such dark, muddy tones as well. Sean Connery favoured the combination in Goldfinger, as did Yul Brynner.

Which brings us to the last risk. A significant issue with wearing a black tie is that it can seem a little dull if another area of dress – probably the shoes – is also black. Traditionally, men have rarely worn brown ties for similar reasons. Bear this in mind, and just ensure there is enough interest going on in the rest of the outfit to compensate: a striped shirt perhaps, an unusual suiting, or an Oxford with a fetching Foster’s fade.

* There are two types of grenadine tie, comprising larger and smaller textures. I generally prefer the larger, called garza grossa by the Italians that weave them, over the finer, called garza fina or piccola. The latter are, as you might expect, more formal.

You can follow the discussion on How to wear a black necktie – reader question by entering your email address in the box below. You will then receive an email every time a new comment is added. These will also contain a link to a page where you can stop the alerts, and remove all of your related data from the site.